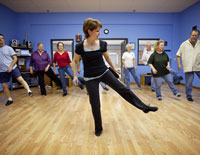 By day Dawn Thompson sits at her computer, managing human resources tasks for long-term care facilities. But at night the Albert Lea resident cha-chas through calorie-burning routines with a ballroom dance group. She's lost a total of 30 pounds and made new friends: "It's just exhilarating," she says.

Thompson, 52, has danced for years but intensified her efforts after getting involved in the AARP/Blue Zones Vitality Project, sponsored by the United Health Foundation. Launched in May 2009 and based on lessons learned from "blue zones" — regions of the world where people tend to have long life spans — the project helped the town's 18,000 residents eat better, become more active, connect with one another, and find purpose.

Volunteers sponsored 15 initiatives, from cooking classes to walking groups. Officials created pedestrian-friendly paths and community gardens, and two-thirds of the city's restaurants began serving healthy foods. By October 2009 participating residents had lost an average of three pounds each and gained about three years each in estimated life spans. To encourage continued success, we promised to return and check in.

More than a year later, officials no longer track weight lost or years gained, but we're pleased to report Albert Lea is sticking with the program. As far as exercise goes, the town is definitely keeping up: Walking groups continue, and steps taken via activities such as dancing and bicycling now count toward mileage totals. In 2010, residents officially logged more than 42,000 miles, up from 37,558 miles during the first year of the program. City leaders also snagged state and federal grants to keep the project going; some of the funds are being used to build a new Vitality Center — a hub for sharing program concepts. (More than 10 cities — from St. Cloud to Seoul — have requested training.) Plus, Albert Lea delivered fresh produce to local schools via a Farm2 ­ School program. And 22 employers now offer Worksite Wellness programs, which have given free health assessments to more than 1,000 employees.

But it's the residents of Albert Lea who have really kept the project alive. Since enrolling, Brian Mattson, 40, increased his estimated life expectancy from 52 years to 78. He eats smaller portions, walks daily, and does community theater — and he's lost 55 pounds. Mattson says the project has improved his habits and his happiness: "I can't imagine my life differently right now."