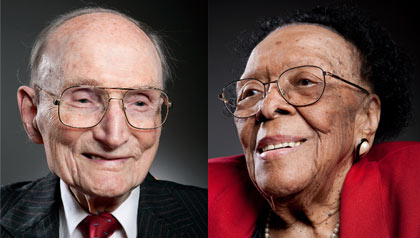 Vincent Lindyberg, 100, and Mary Allen, 105, are among the Maryland centenarians who will be honored at a luncheon May 12.

When Mary Allen was born in 1906, her parents traveled by horse and buggy, grew their own food and lived in a segregated society.

"We were called 'colored.' Back then we were not black, we just lived in our section, and that's where we were comfortable living," said Allen, who grew up in McDaniel, a Talbot County town.

The first car she saw was a Ford hand-cranked Tin Lizzie. When Allen learned to drive in the 1930s, she pushed and pulled a rod on the floor of the car to shift gears. Now you can start a car just by pushing a button.

"We're living in another world. Our world that we lived in and grew up in is not relevant. It's outmoded," she said. "We old people can't just hold on and do things like we did. We have to change, if we can, with the times."

Allen and about 60 others age 100 and older will be honored May 12 at the Maryland Centenarians Recognition Luncheon at Martin's West in Baltimore County. AARP Maryland is a cosponsor of the event.

When the microphone passes among the centenarians, who share their stories with about 700 attendees, there's not a dry eye in the house, said Rawle Andrews, AARP regional vice president.

"Everybody who's being honored in the centenarians luncheon has been through two world wars, a Great Depression, any number of recessions and, more recently, this whole digital revolution," Andrews said. "They can teach us a great deal about how living a positive, service-driven life can lead to longevity."

Allen credits God and her four-decade teaching career for her longevity. She is grateful to mentors for helping her fulfill her dream of getting an education — culminating in a master's degree from Columbia University — and becoming a teacher in the Baltimore City schools.

"I started working when I was in the country, a young girl. If we were big enough to help plant a tomato plant, we did something," she said. "We never saw much money, but we didn't need money. … We had plenty of good food and shelter. We made our own fun."

Vincent S. Lindyberg, who turned 100 in February, also attributes his longevity to a lifetime of hard work, beginning as a boy in Brooklyn, N.Y., where he earned 25 cents each Saturday selling bananas.

"When you're retired, get yourself another job and work until you're over 90 because then you don't have time to die," Lindyberg said. "Don't give death a chance to take care of you."

Lindyberg was an engineer for Western Electric and Lucent before retiring at 65. He worked as a consulting engineer for the next three decades.

He lives in a Glen Arm retirement community with his wife of 73 years, Constance, and says the happiest day of his life was when she said "yes" to his marriage proposal on their third date.

"I said, 'We're going to have a family, and I want you to bring up my family in such a way that they'll become something,' and that's what she did," Lindyberg said. There are five medical doctors and two PhDs among the Lindybergs' sons, grandchildren and great-grandchildren.

The Lindybergs lived in Buffalo, N.Y., for five decades and raised two sons. They moved to Maryland in 2009 to be closer to one of them.

The luncheons began 19 years ago and grew out of graduate student Odessa Dorkins' question about how many Maryland centenarians there were. A professor suggested she find out.

Katherine Lewis is a writer living in Bethesda, Md.