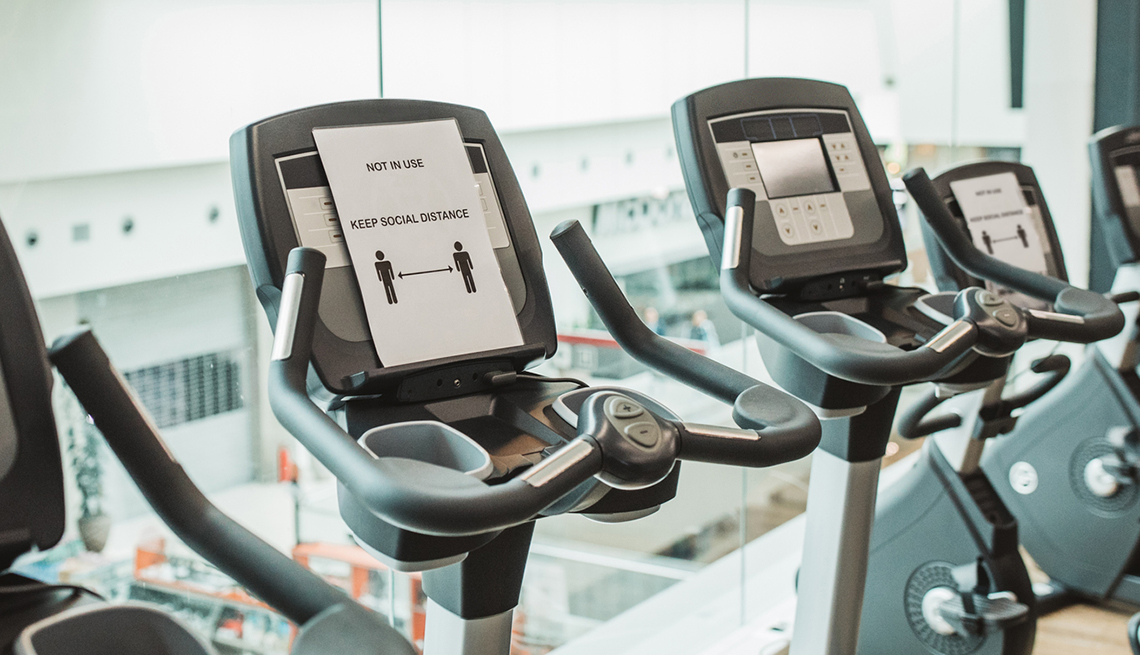 En español | When the Cooper Fitness Center (CFC) in Dallas reopened in May, Cooper Stuart didn't think twice about returning, even though he's in the high-risk category for COVID-19 given that he's 68. A longtime daily gymgoer, Stuart says the virtual classes the facility launched at the start of the coronavirus lockdown simply can't replace the joy he gets from human interaction.

“The excitement of returning feels like going back to college after summer vacation,” he says. “You form a connection with members and employees and look forward to seeing them."

CFC's affiliation with the nationally recognized Cooper Aerobics Center and its preventative medicine practice, the Cooper Clinic, gave him peace of mind, Stuart says, as did the gym's regular updates on safety measures it would be taking upon reopening. As some states begin to approve the reopening of gyms, fitness enthusiasts like Stuart eager to resume their regular workout routines are debating whether it's safe to return, with “yes” and “no” camps emerging.

With good reason. Research findings such as these give Henry Chambers, a professor in the Division of Infectious Diseases at the University of California, San Francisco, serious pause: A study in Japan found that the risk of infection indoors is almost 19 times higher than outdoors and a recent study by infectious disease experts in South Korea suggests that fitness centers may accelerate the spread of the coronavirus.

Before You Hit the Gym

We asked experts what to consider before you take your workout back to the studio.

1. Do you have any pre-existing medical conditions that would make you more vulnerable to complications from COVID-19? A healthy 70-year-old is less at risk than a 70-year-old with heart problems or diabetes, says Chambers.

2. Lauren Korzan, southeast regional director for Aquila, a fitness management company, says every gym should have a plan of action for when and if a member who has been to its facility reports he or she has COVID-19. They may have contracted it elsewhere but they have still been to your gym, she says. Will all members be alerted?

3. In the case of emergency, people should not be performing mouth-to-mouth resuscitation now, says Korzan. Is your gym's staff certified in hands-only CPR? Or does it have a manual resuscitator?

4. If you're in a higher-risk age bracket, Jagim says enquire about peak times of visitation and schedule around those.

"Gyms have a lot of factors that make them one of the last places you want to go right now,” Chambers says. “You have shared equipment, people breathing heavily, questionable air flow.” He feels getting outside to exercise is the smarter choice, especially if you're older and at greater risk of complications caused by the virus.

Tracy Jennings-Hill, owner of LiveURYoga, a 1,900-square-foot studio in Roswell, Ga., struggled with the decision to stay closed after Gov. Brian Kemp issued the go-ahead for gyms to reopen on April 24. “Until the government can provide more guidance than 6 feet of social distancing, I just didn't feel comfortable having students back,” she says. “I have three kids and I don't want them or my students getting sick."

Despite the risks, Andrew Jagim, director of sports medicine research at Mayo Clinic Health System in La Crosse, Wis., notes that regular exercise is crucial to physical and mental well-being. Not everyone is motivated enough to work out at home, and self-isolation can lead to depression, which can lead to inactivity, he says.

“The social aspect of the gym provides another layer of motivation and accountability,” he says. For these reasons, he feels exercising under new safety guidelines at a gym is better than not exercising at all.

But Stuart is not alone in his excitement to hit the gym again. Jeff Zwiefel, the chief operating officer of Life Time, says the company sent a survey in May to its more than 2 million members and two-thirds responded they were ready to return to their fitness centers.

Mike Weeks, 66, a semiretired Life Time member, was one of the first back at his Oklahoma City gym when it reopened in May.

"I was falling out of shape just doing planks and push-ups,” he says. “Since I've been back I've noticed a difference in my mood and quality of sleep. Being able to go to the gym makes everything seem more normal."

What gyms are doing to reduce the risk

The Centers for Disease Control and Prevention revised its website to emphasize that touching contaminated surfaces does not appear to be a main way the virus spreads. Even so, gyms are taking precautions, from purchasing electrostatic sprayers to ensure every millimeter of surface area is disinfected to getting rid of porous equipment such as foam rollers.

Some of the key changes gyms across the country are making to minimize risk include:

Nearly all gyms have implemented a touch-free check-in process and some are enforcing temperature scans. Cooper Fitness Centers has one of the most thorough check-in protocols. Before being allowed to enter the club, members must now answer questions including: “Are you experiencing any flulike symptoms? Is anyone in your household currently under COVID-19 quarantine?” They then have their temperature taken and are given a wristband to signal to staffers they passed the health screening.

2. Masks and gloves for staff

Medical experts believe the virus spreads mainly from person to person through respiratory droplets produced when an infected person coughs, sneezes or talks. Nearly all gyms are mandating that staff wear face masks and gloves. Instead of masks, spin instructors are wearing clear face shields that better accommodate microphones while still providing a barrier of protection. Members are not required to wear masks, though Zwiefel estimates 1 in 10 returning Life Time members do.

David Flench, director of Hancock Wellness Center, a medically integrated fitness center in Greenfield, Ind., says their gym has decided not to require anyone doing vigorous exercise to wear a mask, based on the opinion of Hancock Health's medical director. People doing low-impact exercise are encouraged to wear one.

Gyms are strictly implementing the CDC's suggested 6 feet of social distancing by spacing out everything from cardio equipment to lockers and encouraging members to share a thumbs up instead of a high five. Crunch Fitness staff held trial runs of socially distanced group fitness classes to ensure that floor graphics kept people 6 to 8 feet apart.

Gyms have shut down contact sports like basketball and those that have opened pools are limiting usage to single-lane swimming. A handful of facilities have resumed personal training, but are ensuring social distancing by replacing hands-on adjustments with verbal cues. Hancock Wellness Center has even appointed room ambassadors to go around the facility and ensure physical distancing.

A number of gyms have decided to continue solely with virtual group fitness classes in phase one of reopening. Facilities resuming in-person classes have scaled back the number of participants to ensure physical distancing. Signing up in advance is highly recommended and, in some cases, required.

CFC is offering more than 100 exercise classes but has reduced the maximum capacity of each studio to allow 100 square feet or more per person during each class. For example, spin now accommodates eight people plus an instructor rather than 35. Crunch has also changed its HIIT (High-Intensity Interval Training) class format from four groups of four people to eight groups of two people.

The smell of sweat and gym socks is being replaced by the scent of hand sanitizer and disinfectant as gyms ramp up the number of cleaning stations stocked with EPA-approved products. All facilities ask members to clean equipment (treadmills, free weights, kettlebells, etc.) before and after use and staff regularly patrol gym floors performing frequent cleanings. Extra time has also been added between group fitness classes so studios can be cleaned pre- and post-use. Life Time has adjusted gym hours to allow for overnight deep cleaning. And 24 Hour Fitness clubs will initially be open for 60-minute sessions throughout the day, followed by a 30-minute closure for cleaning between sessions.

Water fountains have been shut down and towels are on offer per request. Many gyms are keeping showers, saunas and steam rooms closed for now. Restrooms are still available. Life Time is blocking off every other shower and every three lockers, and limiting each locker bay to four people.

The average Crunch facility is 25,000 square feet and with most gyms only allowed to initially reopen at 25 to 40 percent of their normal capacity, members are nearly guaranteed 1,000 square feet per person even during nonpeak hours. If your gym isn't as spacious, ask when the foot traffic is lowest.