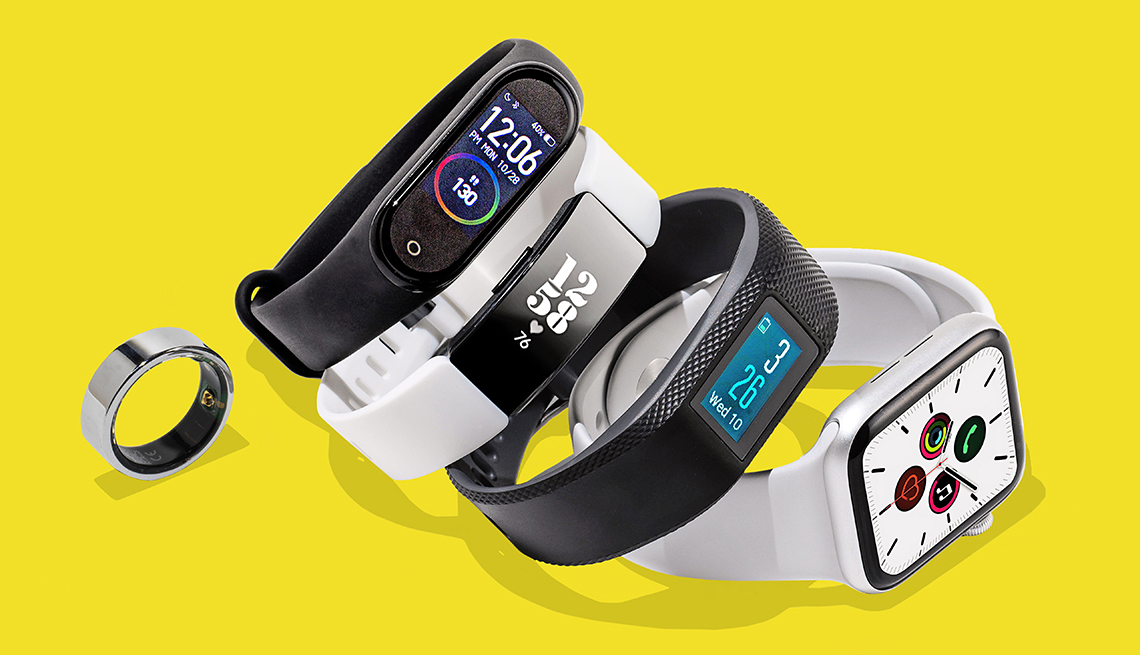 En español | Activity trackers, or fitness bands, left the fad stage a long time ago. Today they're a global business. Part of the appeal is their apparent simplicity: Just wear one like you'd wear a watch, sync it with your smartphone, and go. The electronic device will count your steps, estimate the calories you burn, track your sleep habits and provide reams of other data about your health and fitness. For older Americans, this can be beneficial; maintaining healthy activity levels becomes increasingly important as we age. We had five people over 50 try out an activity tracker for a month. Here's how the device's reports, reminders and alerts affected them.

What it does: You wear it as a ring on your finger, so it doesn't need to replace your watch. 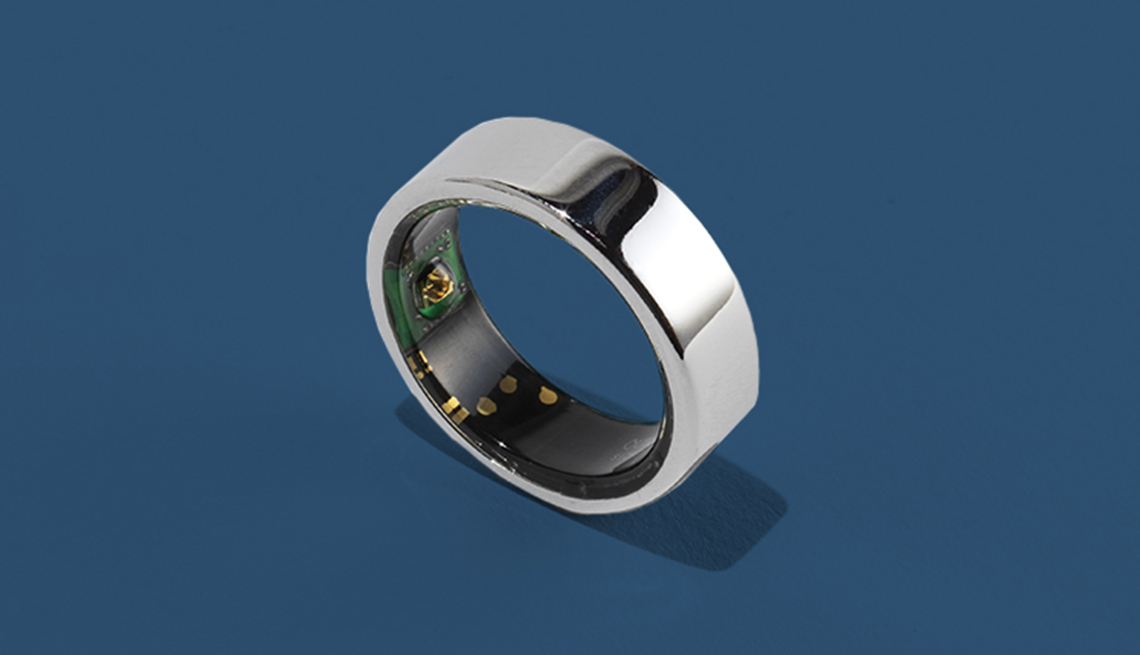 "Time to stretch your legs a bit?"

It's one thing to have your well-meaning significant other gently urge you to pull your lazy butt out of the recliner, into a pair of cross-trainers and out of the house to get even a small amount of exercise. It's another thing for an inanimate object to nag you about your naturally sedentary nature.

Yet after a month of wearing an Oura Fitness ring to track fitness and sleep, I don't mind its five gentle goads. For one thing, they're easier to dismiss than the sometimes not-too-gentle nudges from a determined companion.

"You're halfway to your activity goal. Great progress!"

After a few days, I began yearning to receive Oura's pop-up messages on my phone (they also work with a smart watch), since it meant that even my casual stroll to a local shop and back registered as exercise. Suddenly I found myself less resistant — more motivated, actually — to go pick up a half-gallon of milk or fresh loaf of bread knowing that those thousands of steps were burning calories. And knowing how many calories I was burning made it easier for me to rationalize dessert.

After a month, I was eagerly anticipating the device's inanimate encouragement. Not only did I become more eager to stretch my legs, but my long-legged walks have become extra brisk, to the point of impatience with slower strollers.

"Weekly report: Tap to view the key insights on your past week's readiness, sleep and activity."

I now find myself in a healthy competition with myself, frequently and proudly checking my daily and weekly stats, hoping to top my previous calorie-burning totals, as well as improve my heart rate and sleep results, which it also measures. I still don't like to “exercise,” but receiving documented proof of how active I am makes me feel healthier.

What it does: Tracks fitness and sleep and sends periodic reminders to get moving 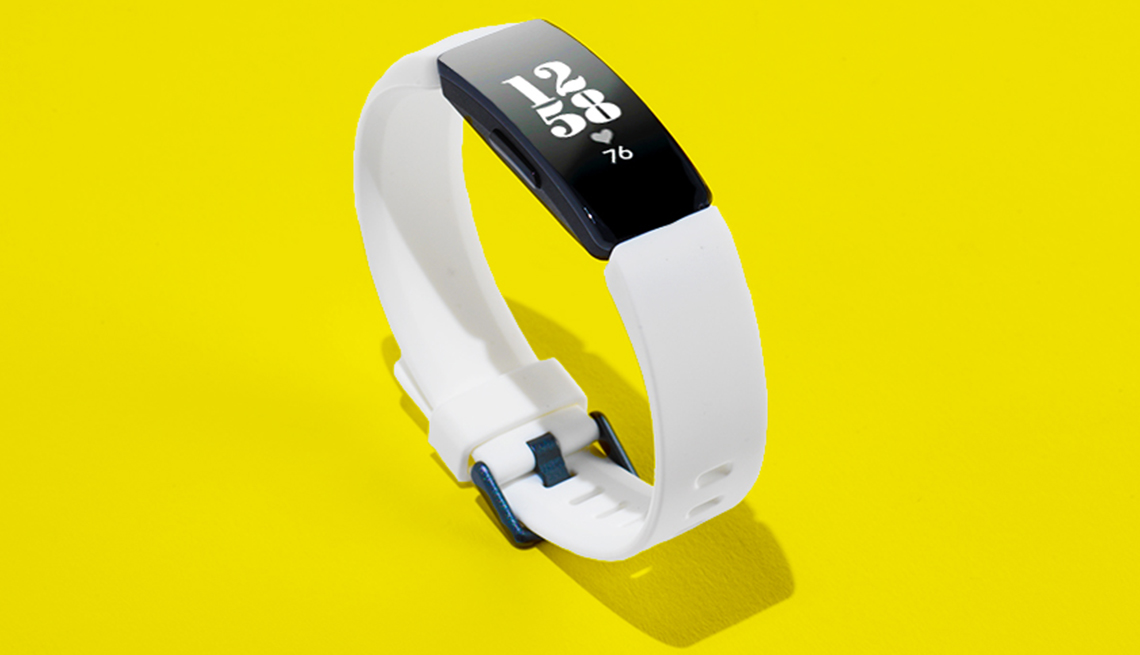 It talks and I respond

When I was in my 40s, living in Vermont and struggling through another bleak winter, my therapist suggested I propel myself outdoors and walk first thing every morning. “The only exception would be a full-blown blizzard,” she said in her no-nonsense voice. I took her stern advice, and it worked. My mood and energy perked up, and I was hooked on walking. For the next two decades, most of those years back in my native New York City, I began each day outdoors for at least an hour.

So when I was offered the opportunity to use a Fitbit to track my exercise, I had to wonder: “How can an electronic device boost a force of habit that's already as strong as my daily cup of coffee?"

Well, not much. At least at first.

On the first day, I strapped it around my wrist and set off for my morning walk. When I returned home, it told me that my usual route tracked around 6,500 steps. After regular plodding throughout the day, the device vibrated at 3 p.m. I squinted at the mini screen to read a congratulatory message that I had taken 10,000 steps that day.

How did that make me feel? Resentful. I don't need encouragement to exercise. And now there was yet another electronic device insisting on my attention: Synced with my smartphone, it also alerted me to phone calls and texts; it told me when it needed to be charged; and it had the chutzpah to coax me to keep walking.

But here's the upshot: By week two, I was doubling my count to 20,000 or more steps each day, mostly by taking longer routes home or getting off a couple of subway stops early and walking the rest of the way to my destination. I had to admit that the device was kicking my butt.

That said, after wearing it for a month, I didn't see any real health benefits. Although I was walking more, my weight remained the same (123 pounds). With the added exercise, I found that I was hungrier and eating more, even rewarding myself with buttery croissants from a French bakery I had discovered during one of my lengthy detours.

So it's au revoir to the activity tracker. From now on, I'll go the distance on my own.

What it does: Built-in GPS allows for easy tracking of outdoor activity 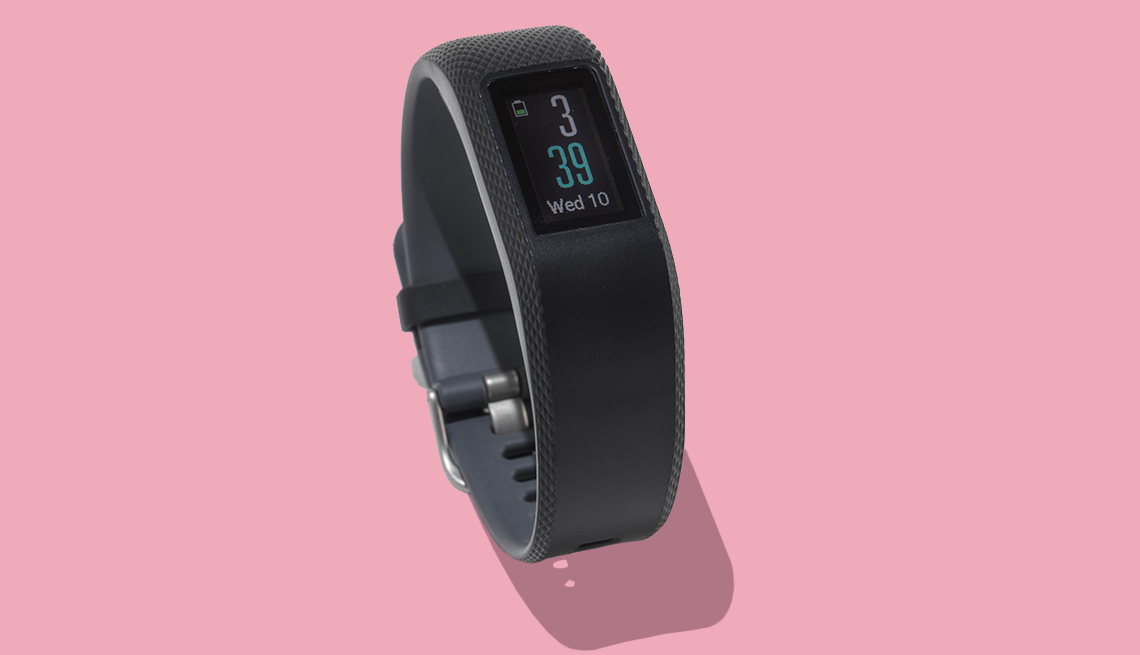 Do I need a device to walk?

I am a woman of a certain age, and things are starting to happen. My knees are a bit creaky, my sciatica acts up when I turn a certain way and maybe that is a touch of arthritis in my right hand. Obviously, I am not a kid anymore. The question is, Am I going to do anything about aging gracefully?

Not long ago a doctor told me something that stuck in my head: The more you maintain a healthy lifestyle throughout your life, the better old age you will have. With that in mind, I have tried to watch my diet and to exercise regularly over the years. These days, I walk regularly, and I attend aerobics classes. More recently, I have taken on a part-time job as a dog walker in Los Angeles; I'm proud to say that the other walkers could be my grandchildren.

But is all this activity really accomplishing anything? I tried an activity tracker, the Garmin Vívosport Smart GPS, to find out. Boy, it can tell you a whole lot about your fitness levels and activities at a moment's glance. As with so much technology, I found that I didn't use half of the many functions it offers. I was particularly interested in specific readings: the number of steps I take, my heart rate, how many calories I burn and my stress levels (by comparing resting heart rates). It was fun to have a tool that told me those things with just a touch. I was particularly pleased that I averaged more than 10,000 steps a day. And that I was burning more calories in a day than I'd imagined. On one day I burned a low of 1,372 calories; on another day I burned 2,019! I must have walked a lot of dogs that day — and gone to Zumba class! I got a particular thrill when I earned a virtual badge for achieving certain goals I did not even know I had; the device would set goals for me each day, such as a number of stairs to climb or an activity intensity level, upping the ante based on what I had achieved the previous day. It was fun to see if I could match or beat them. Thanks, fitness tracker, for keeping me on track.

What it does: Tracks exercise, sleep and heart rate, and it's budget priced 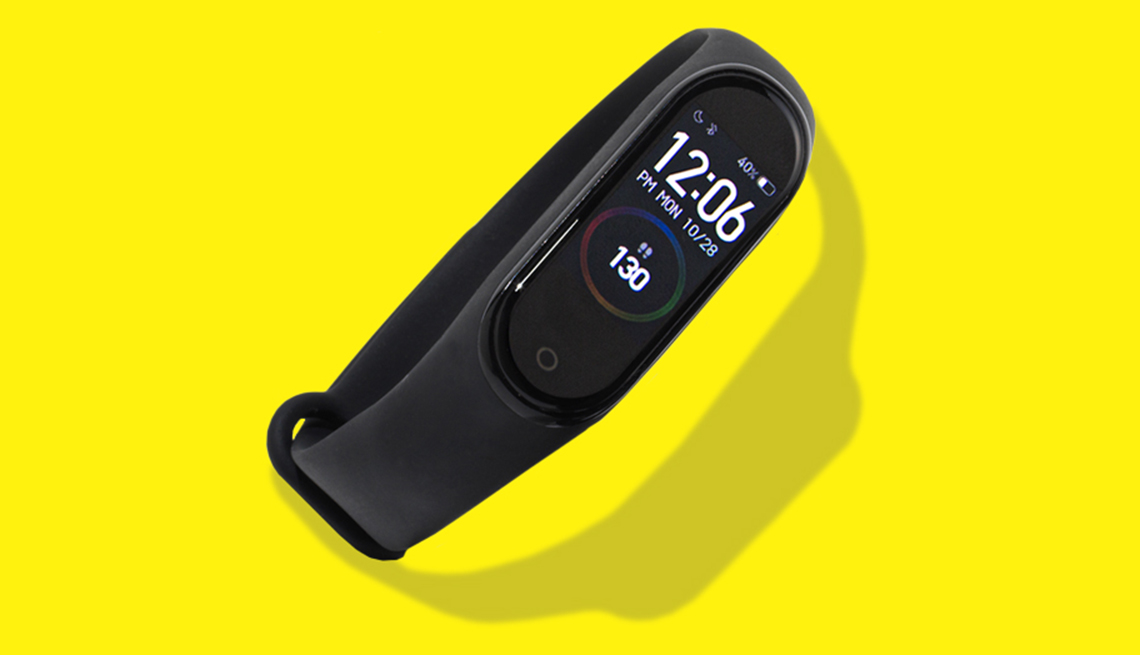 For a month I wore an inexpensive fitness tracker called Mi Smart Band 4. It didn't tell me much I didn't already know. Me smart! Among the “No duh” lessons I learned:

I did learn a few surprising things, though. For instance:

And the final lesson: Being watched changes your behavior — even if you're just being watched by your watch.

Seeing the numbers made plain what I needed to do to be healthier and happier. So even though my experiment is over, I've decided to start wearing a fitness tracker permanently. My dogs will be thrilled.

What it does: Syncs with an iPhone to track fitness activity, water sports included 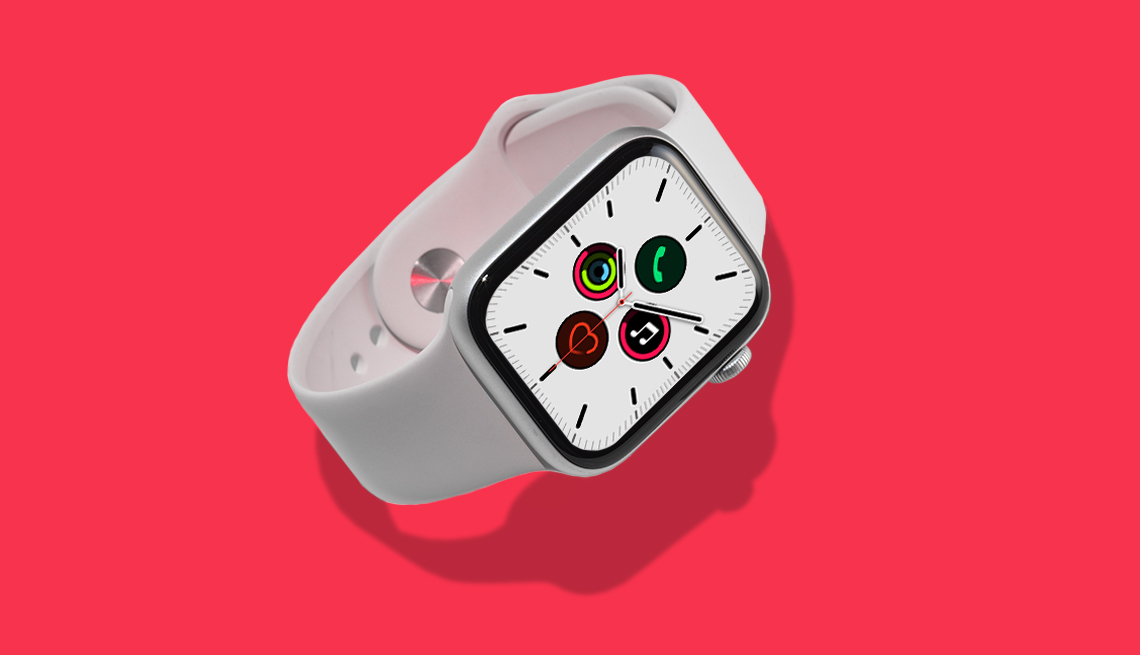 Figuring out my fitness

Six months ago I started treading water for an hour at a time, three to five days per week. My aches and pains lessened, my triceps rivaled Michelle Obama's, and I must have been burning a billion calories per day. Or was I?

Since realizing there is a step-tracking app on my iPhone years ago, I've been a casual step counter. But I live in the suburbs of Baton Rogue, Louisiana, and work from home, so walking is not naturally built into my day. I have to make an effort to get in those 8,000 to 10,000 steps, which means working at a treadmill desk or jogging on a mini trampoline. As I began treading water, I started slacking on my steps and wondered if this was a wash. I couldn't take my iPhone in the pool, so instead I strapped on a waterproof Apple Watch for a month to find out.

The Apple Watch has a picture of a red ring that closes each day when you burn a certain number of calories from moving. The default is 350, but I set mine at 900 because (dirty secret) I like to eat ice cream and I'd rather move more and eat more. Plus, I figured treading water for an hour was easily knocking out that 900.

Shocker: Treading water for an hour burned 300 active calories. Apparently I had gotten good at staying afloat with minimal activity. Meeting that 900-calorie goal meant I had to hit the trampoline and treadmill, too.

Near the middle of the month, I decided to drop my calorie goal to 850. This felt a lot easier. From the watch, I learned that treading water and strolling at my treadmill desk both burned about 300 active calories per hour, whereas I could easily burn 284 on my rebounder or 340 by swimming a lazy breaststroke in half the time. I now tread with my friend for 30 to 45 minutes instead of for an hour, and I swim for the remainder of the time. I still like the social aspect of treading but want my workout to be more productive.

Wearing the watch, with its reminder chimes about my progress throughout the day, also got me to work out more regularly. But whether or not I wear the watch, now I know how I can meet my daily goals when I'm in a time crunch.