En español | Checking emails on your smartphone. Watching a movie on your tablet. Devouring the latest best seller on your e-reader. Many of us spend hours a day looking at our devices’ screens, which emit blue light: the high-energy, short–wavelength light that's also emitted by the sun.

Some say it's bad for the eyes. Indeed, a quick scan of the web pulls up unsettling reports that the blue light from screens can cause several scary eye conditions — even blindness. And in May the French Agency for Food, Environmental and Occupational Health & Safety published a study suggesting that continued exposure to blue light can “accelerate the aging of retinal tissue” and increase the risk of age-related macular degeneration.

So just how concerned should we be? Not very, says Karl Citek, a professor of optometry at Oregon's Pacific University College of Optometry and a member of the American Optometric Association Commission on Ophthalmic Standards. “The amount of blue light emitted by your smartphone, tablet, computer screen or similar device is nowhere close to the intensity necessary to cause retinal damage,” Citek explains. “I saw one blog post which read ‘My computer is making me blind!’ No it's not. It's potentially so remote.”

Citek notes that the blue light from the sun is far more potent than what's emitted by tech devices, adding, “under normal viewing conditions, people have not gone blind from being outside."

Super-intense sources of blue light, such as tactical flashlights and some powerful LED car headlights, can be harmful, says Mariana Figueiro, director of the Lighting Research Center at Rensselaer Polytechnic Institute in Troy, New York, but you would have to look directly into the light for a long period to cause damage. What's more, “Typically, we have a natural aversion to that,” Figueiro observes. “The light is so bright that we'll squint or look away, so we don't look at that source long enough for it to be harmful.”

Part of the reason for concern about tech devices is that people start to notice eye discomfort and fatigue after staring at screens for a long time, says Rahul Khurana, an ophthalmologist and vitreoretinal surgeon in Northern California and spokesperson for the American Academy of Ophthalmology. “So they think there's some damage going on. Oh, my God! I'm exposed to all this blue light. Now I'm having eye problems. The reality is, they're experiencing eyestrain.” 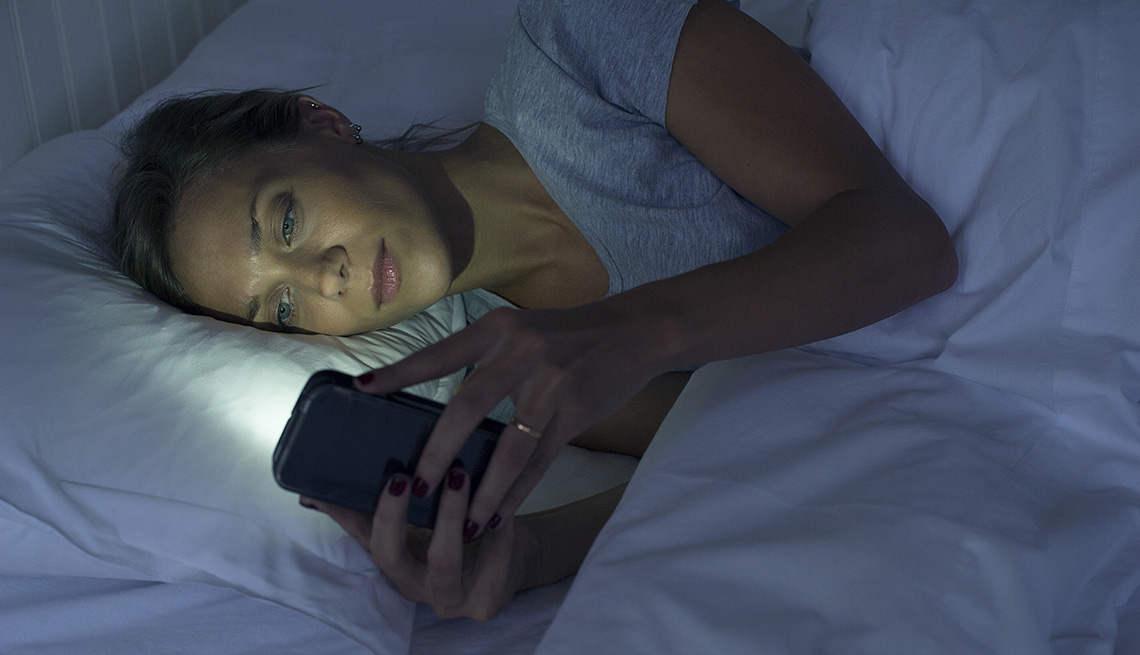 According to the Vision Council, about 80 percent of adults report using digital devices for more than two hours a day and 59 percent experience symptoms of digital eyestrain. Others complain of a dull, aching pain behind their eyes.

But the symptoms don't end there. “When you concentrate on looking at something, your blink reflex goes down,” says Khurana. Indeed, studies show that we blink about 15 times a minute, but only half to a third as often when we use computers and other digital devices. This can lead to dry eyes that feel itchy and uncomfortable. Many people also end up with blurry vision, and some try to compensate by leaning forward or, if they're wearing bifocals, dropping their chin to look through the bottom portion of their glasses — resulting in a sore neck, shoulders and back.

There is one way that blue light can be a problem: It interferes with our ability to get a good night's sleep. “Blue light is a double-edged sword,” says David Blask, M.D., associate director of the Tulane University Center for Circadian Biology. During the day, when the sun is out, it stimulates us. But too much blue light exposure at night has the same effect, “disrupting your circadian system and suppressing your melatonin production, which can lead to serious sleep problems.” So limit (or forgo) screen time in the hour or two before bed.

Blink frequently: When you're in front of a screen for a long stretch, combat dry eyes by blinking slowly every so often. “This allows your eyes to re-nourish the ocular surface with tears, which usually helps with digital eyestrain,” Khurana explains. Also, consider using lubricating eye drops.

Employ the 20-20-20 rule: To reduce the risk of tired eyes by constantly focusing on your screen, look away from your computer at least every 20 minutes and gaze at an object at least 20 feet away for a minimum of 20 seconds.

Keep your distance: Holding electronic devices too close to your face — which most of us do — can cause eyestrain. “Hold handheld devices at normal reading distance, which for most people is about an arm's length away,” Citek recommends. Keep your computer screen about 25 inches from your eyes. And position the screen so you are looking slightly downward.

Adjust screen display settings: “Ensure that the brightness of the screen that you're viewing is matched as closely as possible to the brightness of your surroundings,” Citek says. (Tip: If the screen you're reading from now looks like a light source, it's too bright.) If you're viewing your screen in a darkened room at night, turn down its brightness. Many smartphones will do this automatically (if you have an Apple device, try the Night Shift setting).

Banish glare: When light strikes your laptop's screen, you can get an annoying reflection. This becomes an even bigger issue as we age. “Our lenses get thicker, and the protein structure of the lenses changes, both of which increase blue light scatter,” says Figueiro, who compares it with watching a movie in a theater with the lights on. If you're holding a smartphone or e-reader and have to cup your hand over the screen to read the words, adjust the device's contrast or brightness levels.