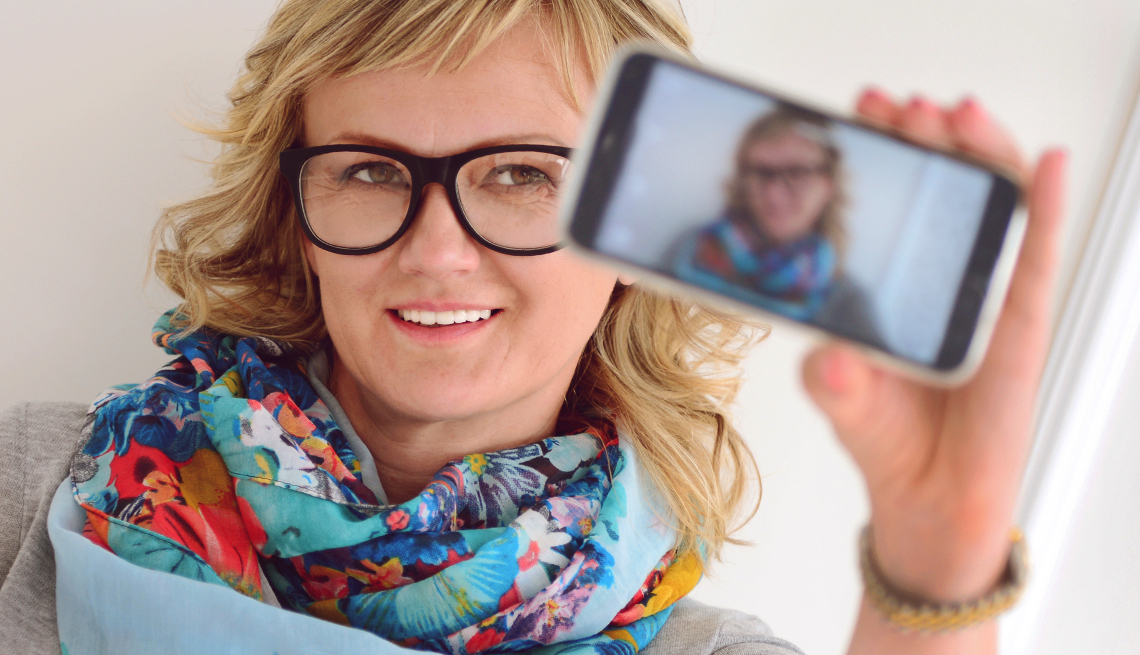 Taking a picture at the close "selfie" range makes your nose look a whopping 30 percent wider than it actually is in real life.
By:
Kathleen Fifield
AARP
March 08, 2018

Hate how you look in a selfie? Relax. It’s not you, it’s your phone — more specifically, how your nose looks on your phone, according to a study published last week in JAMA Facial Plastic Surgery.

Being captured at such close range makes your schnoz look a whopping 30 percent wider than it really is, explains the study’s lead author, Boris Paskhover, a facial plastics and reconstructive surgeon at Rutgers New Jersey Medical School. He says he hopes the research can make clear the effects of camera phone distortion to all the patients who ask for unnecessary nose jobs.

“Phones make people look terrible — not terrible, but worse,” he says. Yet those coming into his office "and taking out their phone and saying, 'Look how bad I look,'" did not seem to realize this. So he’d say to them, “You’re looking at it on your phone, with terrible lighting, taken at a weird angle and up close. It’s the worst conditions and the worst angles and the proximity is the worst.”

Paskhover isn’t the only surgeon reporting patients with selfie image problems. A recent poll by the American Academy of Facial Plastic and Reconstructive Surgeons (AAFPRS) found that 42 percent of their members reported patients seeking cosmetic procedures for the purpose of improving how they look on social media platforms.

And while Paskhover and other plastic surgeons agree that the nose tends to be the bane of selfie-hating millennials, older patients also walk the line that leads from unhappiness with a Facebook party pic straight to a plastic surgeon’s office. What do they want to discuss when they get there? Their neck and their eyes, surgeons uniformly reported.

Unlike some of the would-be rhinoplasty patients, the problems identified by over-50 patients are a combination of age-related shifts and the fun house mirror effect of a digital screen. “Certainly digital images can distort and exaggerate how bad the changes are,” says Patrick Byrne, director of facial plastic and reconstructive surgery at Johns Hopkins and AAFPRS board member.

Yes, he says, at a certain age you may have lost some fullness below your lower eyelid, or the lid itself may be puffier — but the under-eye shadow you see on in a selfie can be exaggerated by the camera angle or poor lighting.

As a result, Byrne says his conversations with older patients aren’t unlike those he has with “young rhinoplasty patients.” As he describes them: “I realize it seems like you have a pretty big bag, or overhanging tissue of your lower eyelids, but you might find images where you don't. Sitting in front of me, you look pretty good.” It’s important, he says, that people realize that “getting a complete picture of how we look is not going to happen on a tiny LCD screen.”

Yet those same screens, doctors note, are also being used to convey their patients’ aspirational cheekbones, eyelids or nose during consultations.

“What I’m seeing in clinical practice is, number one, that people are using selfies rather than pictures of other people in order to try to outline what they desire, and second, that it’s not even a real picture of themselves,” says Jeffrey E. Janis, president of the American Society of Plastic Surgeons, who notes that a decade ago people brought him shots from magazines.

And no, he says, it's not only younger people who are shooting for facial perfection through a lot of filters on their phone. “I’m in clinic right now, and this just happened with a patient who had concerns about her lips,” Janis says. To express what they'd ideally look like, the middle-aged patient, “showed me a selfie of herself that had filter on it that made her look like a cat, purposefully.”

Given the slippery nature of both the digital and selfie image today, Janis stresses how important it is to find a board certified plastic surgeon who will keep sanity, and your safety, in mind. “If a patient comes in and they’re pointing out something they see that we can’t see, that’s a concern that needs to be addressed before any procedure is done,” he says.

“If someone comes in with a picture using filters or other distorted reality, I will spend a lot of time with that patient discussing what’s possible and what’s not possible,” he says. “If we can arrive at a situation where we have an appropriate level of expectation, then I’m happy to perform that surgery. But if they come in and say they want to look like a cat, they’re entitled to a second opinion.”

Does Anyone Look Their Age Anymore?

With healthy habits and a good outlook, women are feeling ageless