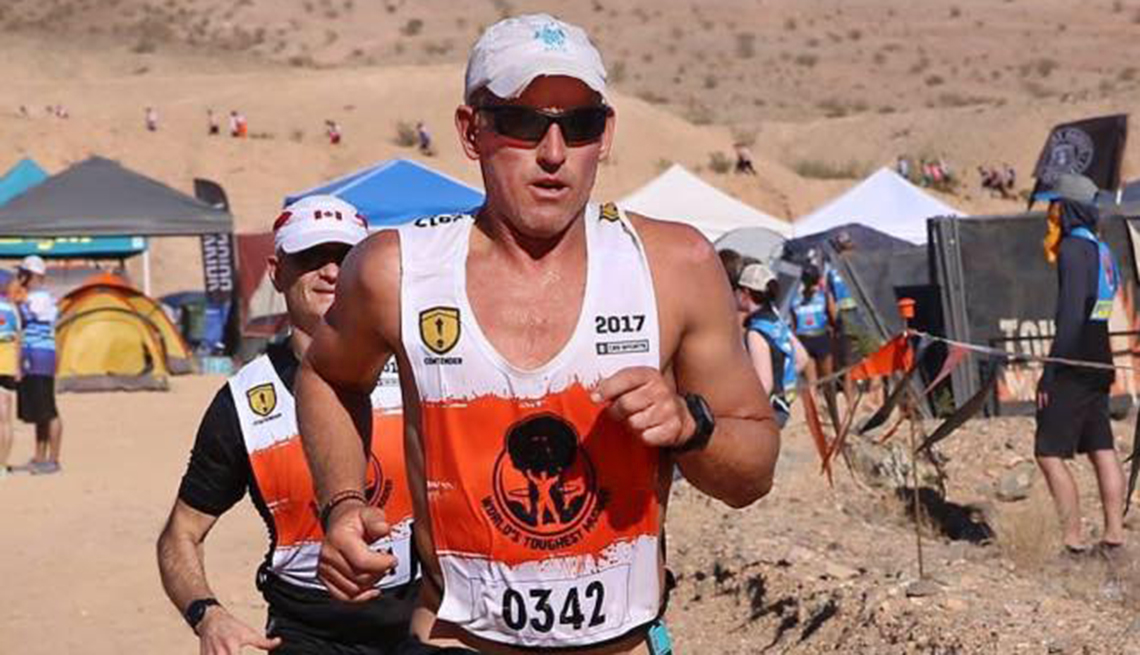 Mark James is a father of three, but still finds time to compete.

If Mark James, winner of the over-50 category of the World’s Toughest Mudder contest, isn’t exactly like you and me (before getting into the extreme obstacle course competition, the former Navy SEAL completed the Hawaii Ironman Triathlon 10 years in a row), he does know what it's like to want to sleep in on a Saturday instead of working out.

Unlike us, he'd never actually do that. “I've never regretted a run I went on, only a run I didn't go on,” he says, shortly after wrapping up several days of 10-hour workouts.

But if he happens to make his living training Navy SEALs how to dive (and likes to accompany them on their regular ocean swims), he’s also a father of three, who, well, has to make a living.

In fact, what he seems to envy most about the younger guys in the ultracompetitive Mudder world isn’t their speed or swifter muscle recovery but all the time they have for training. “Some of them are still living with their parents! I have bills to pay, and kids, and work, and life!”

Not that he's making excuses, something he hates more than the penalty runs you have to take during the competition if you fall off, say, a 30-foot-high rings course because your hands froze during the frigid desert night and you couldn't grip tightly enough to hold on after swinging through the air like a monkey (as repeatedly happened to him in the 24-hour Lake Las Vegas competition, which airs Dec. 23 on CBS). 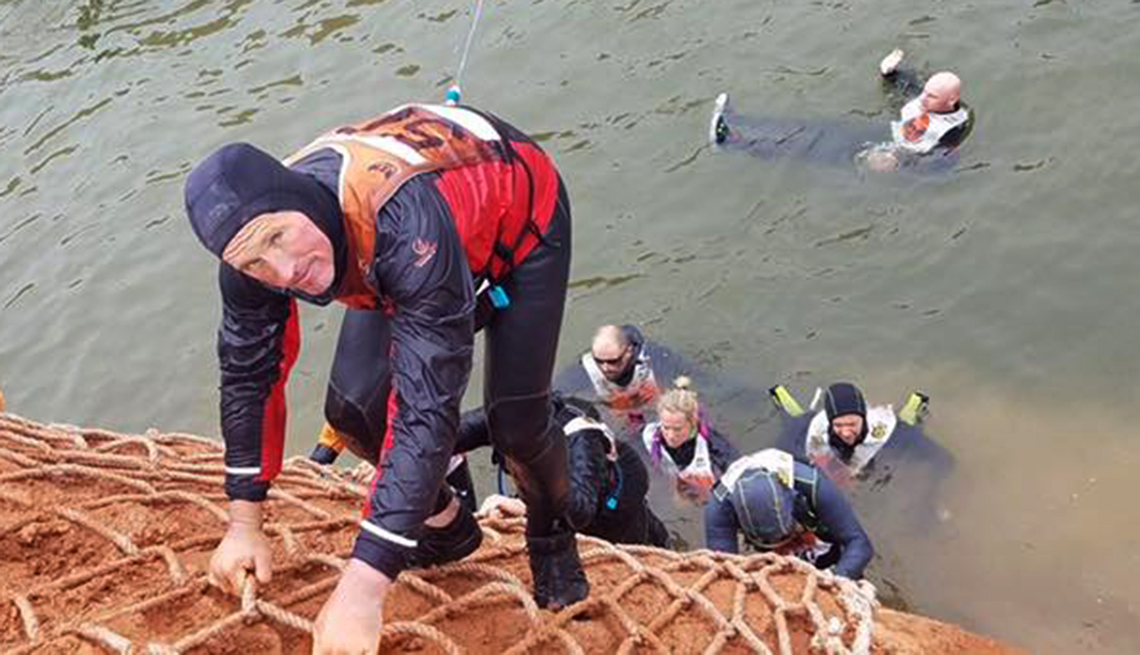 But for all his superhuman endurance, James says that just keeping at it, and trusting in his own pace, might be his biggest strength of all. (Well, that, and steady infusions of Ensure, which he jokes is his magic weapon in getting steady energy and nutrition on the move.)

And that's where the rest of us come in. Here, James' advice you can use — truly — for fitting in fitness and making more of your workouts in 2018.

To get to work, James runs four miles up the San Diego coast. If you can't do that, then how about trying to work in a short walk on either end of your daily schlep to the office? Think of how many steps you could log if you get off a stop earlier on the train or park farther away from the office than you need to.

Slow down your pace

Whether you’re training for a 24-hour endurance race or just want to increase the distance you can walk or bike, know that slowing down your pace can have big benefits. One of the ways James says he’s a better competitor at 50 than he was at 25, for instance, is in consistently sticking to a speed that lets him “keep on chugging” when others have burned out. “I’m smarter at pacing and I know my limits, and that makes me the little turtle that passes all the hares,” he says. Invest in a pedometer or fitness tracker, and play around with finding the pace that elevates your heart rate, but also lets you keep going for a little longer each time. Or work in intervals, alternating short bursts of higher-intensity activity with longer stretches at a lower intensity.

The hardest part of the Toughest Mudder competition, says James, is the “emotional roller coaster” of the long, cold night, when you have to keep facing down obstacles like a 40-foot cliff jump into cold water, loop after loop, hour after hour. “You’re in intense, agonizing pain and you start thinking, ‘I’m cold and I’m hungry and I don’t want to be here!’” What got him through, he says, is the same mental discipline that helped him survive the notoriously difficult final week of SEAL training. “What I learned is to not think too far ahead,” he explains. “During hell week, a lot of people quit on Monday or Tuesday night because they think they can’t keep up the pace until Friday night.” The key, he says, is focusing only on your next short-term task, and “tricking yourself to keep going by telling yourself you have just one more mile, or one more exercise to go.” 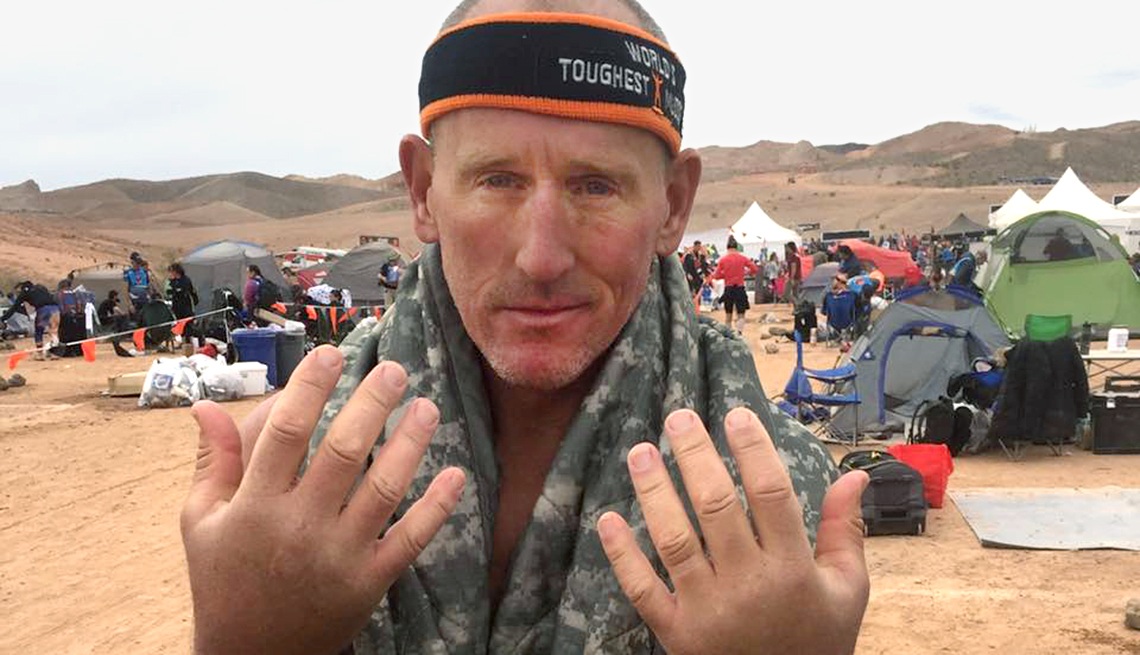 While James says he’s truly surprised to be able to continually exceed goals in endurance racing at his age, he concedes that recovery times are longer than they used to be. What helps? Consistent post-workout stretching, which keeps muscle soreness and tightness in check. Shoot for 20 minutes after you exercise, and, to loosen up muscles even more, employ a beaded foam roller. “Rub it up and down your calves and legs, and put it under your hips and thighs while you’re lying on your side watching TV,” James recommends.

Putting races on the calendar, and paying for them, “creates a big incentive to stay in shape,” says James, who’s gearing up to complete six major Mudder races internationally in 2018. And this kind of longer-term goal setting — say, training for a golf tournament or very long charity walk — can also help you avoid the New Year trap of “going full bore into a workout program and giving up three weeks later.” When in doubt, he says, start off more slowly, so you don’t “do too much too soon” and get injured … or discouraged. If you want help in developing a workout plan, a little expert advice or coaching can go far. “Hire a swim teacher, join a local running club, or just buy a running magazine and take advantage of all the advice out there on how to train,” he says.

Scheduling a visit to the gym or a walk around the neighborhood with a friend can strengthen the commitment to work out. But having workout buddies of different fitness levels can create the ideal mix of motivation, challenge and recovery, James has found.