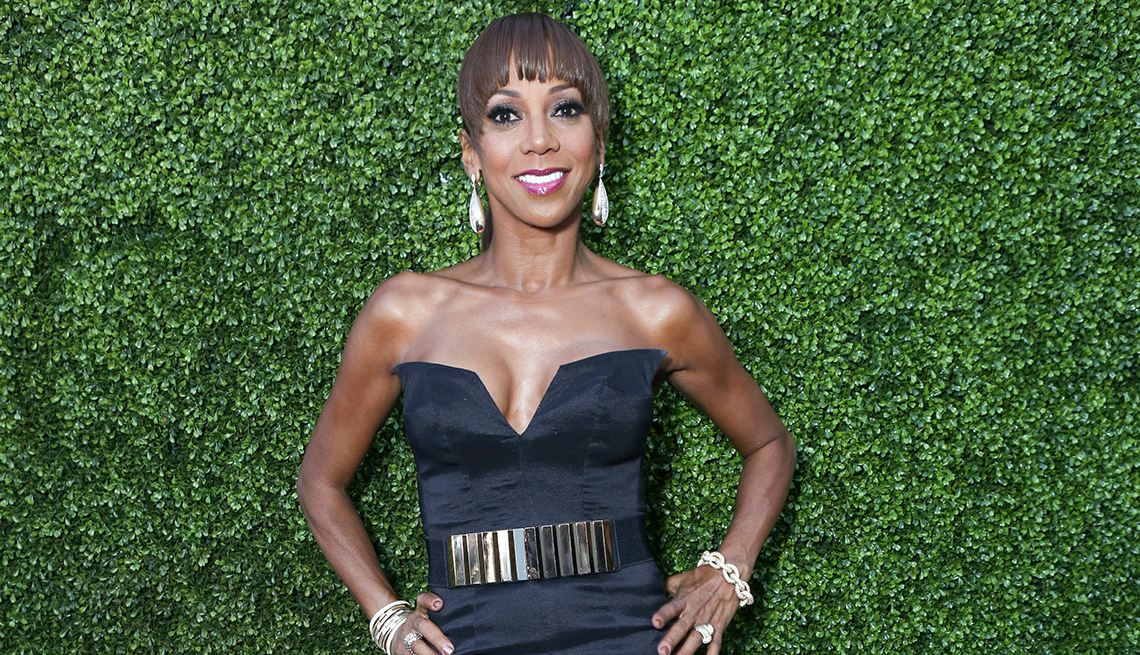 En español l Holly Robinson Peete — the actress who launched her career playing the ever-resilient Officer Judy Hoffs on 21 Jump Street — turned 50 in September. Instead of letting it get her down, though, the Philadelphia native and mother of four has embraced the milestone, with a birthday bash and a little humor even. "I put these filters on my Instagram, and it takes 10 years off," she jokes.

In truth, Peete's natural beauty needs no filters. If she needs anything at all, it may be more hours in the day. Even as she celebrates 30 years in show business, she's also juggling family, weighing her next TV venture, traveling across the country giving speeches, and managing the HollyRod Foundation, an organization she and her husband, former NFL quarterback Rodney Peete, founded to help families affected by autism (their oldest son has it) and Parkinson's disease (Holly's father was diagnosed in 1982). Even with an overflowing plate, though, she carves out time for herself.

In part, I've been blessed with decent genes. I don't feel like I look 50.

However, I'm a true hands-on, working mom. There are a lot of things pulling at me at once. I know that I need to balance that with working out, eating well and sleeping because it fuels me to get in front of all of the other things I do.

How do you fit in fitness?

The more I can do on my own, the better for my busy lifestyle. The things I have to schedule are harder. I can't do trainers. I have a stair stepper at home, and I do Pilates. I'm also planking a lot to strengthen my core. There is a gym across the street from our school bus stop that I'll slip into some days. If I can get in three days a week, I'm good. I don't want to BS myself. I have to work within parameters that are realistic for my lifestyle.

It's refreshing to hear a celebrity mom talk about the juggling act.

The image of what we celeb moms put forward isn't always true to form. I've got 30 years in the business. My brand is the working, trusted mommy brand. I do have resources. But I'm just like you, in that I'm thinking about calling three doctors to see what's wrong with my kid. We all are experiencing the same thing. But I wouldn't in a million years ever try to put myself in the category of, say, a single mom working in the city.

So, what's the one exercise that you love to hate?

Squats. I hate squats! I also don't like to run. I force myself because it works. I will climb some stairs. I will walk inclines. But my knees don't like squats. Half the time, it's that I'm not doing them properly. But there's no replacement for them. There's nothing like working with your own body to get in shape.

How have your workouts changed from, say, 10 years ago? More intense? Less intense?

Less. I was all into extreme boot camps and hiking. I was down for it all. Now, it's quick workouts. And I'm focused more on having a strong core.

You must be a healthy eater, then?

Sure, when I can make the proper choices and be consistent about it. I drop the ball sometimes. At home, I always feel like I'm making six meals for my family. For myself, I try to juice to get my veggies and fruits, my omegas, my flaxseed. I don't have a lot of time. I'm too on the go. I'm often trying to find healthy food on the road, at airports and hotels. It's a challenge.

What is your favorite comfort food?

If I'm in Philly, give me a cheesesteak with provolone cheese and hot cherry peppers. And I've got to wash it down with a Frank's orange soda and a [Tastykake] Butterscotch Krimpet. The last time I was in Philly, I went right to Jim's [Steaks]. You have to allow yourself to cheat. One time, the whole family went to Chicago for work. We went to Garrett's popcorn. Butter and grease. It's so good and so wrong!

With all you do, how do you relax?

Spas. A facial or massage relaxes me. I need to detach for a couple of hours. For my 50th, I told everyone that I wanted a $50 donation to HollyRod. But I also received spa gifts.

What did turning 50 mean to you?

It's an interesting decade. It feels like a movement, in a positive way. Maya Angelou said "the 50s represent everything you were meant to be." So, there's a pressure to make this decade count. What are you meant to be? And whatever that is, will it happen?

If this decade is about making it count, what are you doing toward that goal?

Career-wise, I have a show development deal in the works. We've been approached about doing a family reality show. I'm thinking about it because there isn't a [reality] show out there featuring a family with an autistic child. It could raise awareness. But overall, I'm making sure my ducks are in a row. I'm going to focus on not sweating every little element. Not overthinking every issue, and injecting more humor into my life.

Stacy Julien is an online editor for AARP Health. 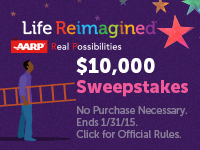