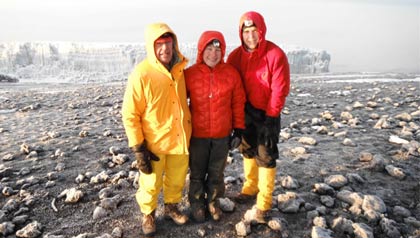 Richard Byerley, 84, is in the Guinness Book of World Records as the oldest person to summit Mount Kilimanjaro on foot. He was accompanied by his grandson and granddaughter.

Richard Byerley is living proof that you're never too old — not even to set a world record. Earlier this month, at 84, he became the oldest person to summit Mount Kilimanjaro on foot.

Not many octogenarians would attempt to climb a 19,340-foot-tall mountain in Africa, but Byerley never thought twice. When he bought the trip in January at a charity auction in Sun Valley, Idaho, he knew nothing of Kilimanjaro climbing records but rather had spontaneously bid on a trip and won it.

His achievement may have gone unrecognized but for the Kilimanjaro specialist who booked his trip. Robin Paschall of Adventures Within Reach said she immediately recognized that if Byerley reached the summit he would smash a world record set last year by an 82-year-old British man. She made arrangements to document his climb so he could be recognized by Guinness World Records.

You'd think that the pressure would be on, but Byerley, a retired alfalfa farmer from Walla Walla, Wash., says he felt none. Had he suffered any altitude sickness, he was prepared to turn around. "It wasn't worth risking my life," he says.

Before setting out, Byerley did not know whether he would complete the six-day trek. But his wife of 63 years, Beth, had faith in his abilities. So did his 29-year-old granddaughter, Annie, who accompanied him along with his grandson Bren, 25. "There was no doubt in my mind that he was physically capable of it," Annie says.

Byerley was well covered if he needed medical attention. Both Annie and Bren are first responders, his guide was trained in wilderness first aid, and the tour was covered by Flying Doctors, which could dispatch a helicopter in case of a medical emergency.

But the only thing Byerley suffered were cold hands when he reached the summit on Oct. 6. He also missed Beth, 84, who had reached the summit of Kilimanjaro 30 years ago, but Byerley did not accompany her on that trip. She didn't go this time "because she said once was enough," he quips.

A climb to remember

The porters and guides along the trail were aware Byerley was on his way to a world record, and they greeted him with the words "Babu, jamba," which means "Hello, grandfather" in Swahili.

The lead guide was firm about setting the pace in an effort to conserve their energy. On the fifth day, Byerley and his grandchildren left base camp for the summit at 11:45 p.m. and arrived at the top at 6:15 a.m., just before sunrise. The different hiking groups making the climb carried lights to see in the dark, and that became one of Byerley's most vivid memories. "I remember looking down and seeing the lights and feeling relieved that I was already up ahead," he says.

They made the final trudge up through about two inches of snow. "It was clear as a bell," he recalls. "Layers of clouds were beneath us." Annie says she and her cousin Bren had tears in their eyes — they had all made it, and in the process their grandfather had set a world record.

Since returning, Byerley has taken some gentle ribbing from friends and family members who say they hope to beat his record when they turn 85. But his accomplishment reflects a lifetime of physical activity. Raised on a farm, he worked from sunup to sundown feeding and caring for livestock. At 21, he married Beth and later started his alfalfa farm, where he spent the next 40 years, among other things, seasonally moving 40-foot irrigation pipes.

Once the farm became successful, the couple devoted more time to their tremendous love of the outdoors — backpacking, hiking, bicycling, sailing and skiing, which he took up at age 40. They eventually built a house in Sun Valley, where their four children and nine grandchildren could ski.

Byerley and his wife winter in Sun Valley, which has a large, active retired population, and ski nearly every day with family and friends. In the spring and fall, they drive their 36-foot motor home mostly to national parks to enjoy the hiking and scenery (Zion is their favorite). In summer, they'll take 60-mile bike rides and hike six to 12 miles around Sun Valley, where Byerley primarily trained for his Kilimanjaro trek.

Over the years, the couple has hiked and biked in destinations worldwide, and navigated a 50-foot sailboat on trips from Puget Sound to Tahiti and Alaska. He doesn't exercise in a gym or lift weights, "though I probably should," he says. He's not the first world record holder in his family: His daughter, Janet Byerley, became a world champion BMX bike rider in her 40s.

Yet with all the attention he's received for his Kilimanjaro climb, Byerley believes a 45-day bike ride he took across the United States at age 74 may have been even more challenging.

You may also like: Top exercise tips for boomers. >>

Karen Goodwin is a writer in Boulder, Colo.