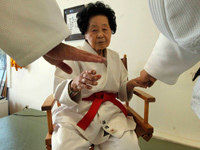 At San Francisco's 23rd annual Keiko Fukuda judo tournament, kicking off this month, its 98-year-old namesake will be celebrated as the first woman to achieve judo's highest level — 10th-degree black belt. Says the 4-foot-10, 100-pound granddaughter of a samurai: "My motto is, 'be strong, be gentle, be beautiful.' " That's also the title of a film documentary about her scheduled to debut in early 2012. "She's making the impossible possible for women to go farther in the martial arts world," says Shelley Fernandez, 80, a brown belt and manager of the Soko Joshi Judo Club where Fukuda still teaches.