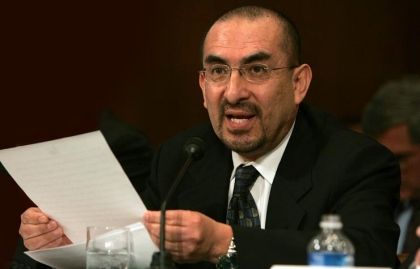 En español | The phone rang, the caller ID flashed "Unknown" and Elmer Huerta almost didn't pick up. "I never answer those calls," says AARP en español's medical expert, "but for some reason, this time I did."

Good thing. It was the White House calling.

The caller congratulated Huerta on being named a White House Champion of Change for Public Health and Prevention and invited him to the White House, where he'd be honored on Sept. 10. "I told them, 'You just made my day, my month, my year!' " he says.

The public health expert's role as a tireless advocate for preventive services and education has been playing out over 27 years, beginning when he was a young medical oncologist in his native Peru. After turning his focus to the public health side of cancer and moving to the United States, he founded and is director of the MedStar Washington Hospital Center's Cancer Preventorium, which provides preventive care services to those who have no health insurance.

He also hosts Spanish-language radio and television shows here and in Peru. He was nominated for the Champion award by the American Cancer Society's Cancer Action Network, with which he has worked to combat cancer through prevention and education efforts.

Huerta was appointed by former President Clinton to the National Cancer Advisory Board, has served on the American Legacy Foundation Board and, in 2007, was the first Hispanic ever elected president of the American Cancer Society. He also is author of the bestselling book La salud hecho fácil. (In English, Your Health Made Easy!)

Q: What do you consider your most meaningful accomplishments?

A: Promoting prevention in the community. I've used all forms of mass communication to educate the public. I wanted them to receive information that was based in science, but explained in a way that was easy to understand and practical so they could use it to take care of their health. The second part has been to provide access to preventive health care. For 19 years, through the Cancer Preventorium, I've provided access to thousands of uninsured Latinos and others.

Q: What is still left to do?

A: This is a never-ending task, reminding people about taking care of themselves. I'd like to continue what I'm doing and maybe make my outreach broader, to expand the preventorium concept, to duplicate it across the country. In Peru, cancer preventoriums are very popular. I worked with the minister of health on establishing the concept across that country.

Q: Your antitobacco stance is well known. What spurred your interest and activism?

A: My fight for tobacco control started 27 years ago in Peru. As an oncologist, I treated people with cancer and was seeing more and more lung cancer. The importance of the public health aspect of cancer became a focus for me when I saw that tobacco was causing so many deaths. I started the first Peruvian día de no fumar [smoke-free day] in 1986.

Q: But why leave a lucrative oncology practice to pursue a career in public health?

A: Because I realized that most of the patients that were sent to me for chemotherapy had advanced and incurable disease, and the sad thing was that almost all of those cancers were preventable or early-detectable. I also realized that people knew more about telenovelas and soccer than they knew about their own health. The media bombard people with soap operas and soccer. I knew I had to leave my specialty and work in public health.

I've found that once people find out that they can detect, and even prevent, disease, they'll take action, they'll go in for their checkups. You just need to provide information in a clear, easy-to-understand way. And because I speak Spanish, I knew I'd probably work mostly with Latinos. I appeal to their love of family and to their pursuit of the American dream. I tell them that they can lose that American dream if they have poor health, and that can hurt them and their families. I reach out to them through radio and television.

People everywhere just need someone to talk to them about health in a simple and practical way.