Each August, Judith Moss, 74, ramps up her morning exercise routine. Three or four days a week, Moss makes her way to the high school track in Tarboro and begins practicing for the 100-meter dash, the 1,500-meter racewalk and her main event: the long jump. 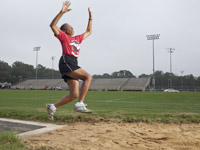 Judith Moss, 74, of Tarboro, practices the long jump for the finals of the North Carolina Senior Games. More than 3,200 people 55 and older qualified for the finals, which are Sept. 10 to Oct. 21.

You could win a dream health vacation — get healthy now!

In September, she starts working a little harder in preparation for the North Carolina Senior Games.

But in the past 17 years she's collected more than 60 medals at the state finals of the Senior Games, a health and wellness program for people 55 and older. About 60,000 people participate each year in local-level competitions in about 100 sports and art activities.

From Sept. 10 to Oct. 21, Raleigh and other North Carolina cities will host the state finals for more than 3,200 participants who, like Moss, qualified at the 53 local-level games statewide.

Moss, the health committee chairwoman of the AARP chapter in Tarboro, started competing in 1995 at the urging of her daughter Leslie. She's come back each year for the health and fellowship of the games.

AARP North Carolina is a longtime supporter of the games and this year serves as a corporate champion.

"The goals and missions are very much the same," said Betty Rising, a member of the executive council of AARP North Carolina and a board member for the North Carolina Senior Games. "It's fun and games, and it's health and wellness."

This year participants can enter about 100 categories, including track events, archery, bowling, swimming and horseshoes, as well as competitions in performing, visual, heritage and literary arts.

Age groups start at 55 and increase at five-year increments until "100 and older."

For some athletes, the events are an extension of a lifetime of regularly working out.

A few participants — including the occasional former Olympian — crave the reward of qualifying for the National Senior Games, held every two years.

"That's a carrot that's out there for the extremely competitive," said Margot Raynor, 60, who founded the North Carolina Senior Games and now works as a consultant for the event.

But the majority are people who simply want to stay healthy and work toward a goal, organizers said.

Organizers stress the goal of the events is to change lifestyles in big and small ways. For example, to help get in shape for a race, participants may start by walking to the mailbox three times a day.

Those changes in behavior are especially important in North Carolina. Earlier this year, the state earned a grade of D for physical activity and an F for obesity from NC Prevention Partners, a nonprofit whose aim is to reduce preventable illnesses by increasing physical activity.

Jackie Allison, 55, a real estate appraiser from Youngsville, has watched her parents, Rufus and Fran Allison — 84 and 79, respectively — participate in local, state and national Senior Games for the past 24 years. Allison loves how the games have provided a goal for her parents, kept them active and given them confidence.

"They play and they play hard," she said of the participants.

This year, for the second time, Allison is looking forward to joining her parents in the state finals, running in three track events and continuing a healthy streak of her own.

Mike Gruss is a writer living in Norfolk, Va.