Save 25% on the AARP Smart Driver online course with code DRIVE. You could save on auto insurance when you complete it. 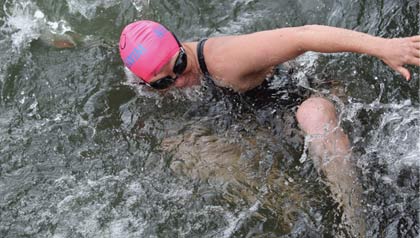 Elizabeth Fry of Westport, Conn., made a record-breaking swim from Battery Park in Manhattan to Sandy Hook, N.J.

Some long-distance swimmers count their strokes; others repeat mantras to keep themselves focused. Still others keep track of their heart rate or the time.

"I completely zone out," says Fry, with a laugh. It's like that in every aspect of her life, she adds. "I'm that person who can drive five hours in a car, and when I get there, can't even tell you what [was on the radio] while I was driving."

That ability to tune out distractions, to put her body on automatic pilot for long periods of time, has taken the 52-year-old Westport, Conn., woman to a remarkable place in her life: Fry is about to attempt a round-trip, solo swim of the English Channel — from Shakespeare Beach in Dover, England, to Cape Gris-Nez in France, and back again.

It's the shortest point across the Channel. But it's still about 21 miles each way — a 42-mile back-and-forth swim — made even more difficult by what one Channel swim historian called the "freakish microclimate and wicked currents" of the body of water that separates England from France.

For participants in aquatic sports and endurance athletes, the Channel is more than a geographical feature. Since Capt. Matthew Webb first did it in 1876, swimming across the Channel has been considered one of the ultimate tests of fortitude and stamina.

Long-distance swimming is not for the faint of heart. Earlier this month, Diana Nyad, 61, abandoned a 103-mile swim from Cuba to Florida at about the halfway point.

There have been about 1,650 successful cross-Channel swims (including one by Fry in 2003), according to the website Open Water Source. To date, 37 have succeeded in the double crossing. If Fry succeeds — this will be her third try — she would be the oldest.

As if the act of pulling her body through 65-degree waters and against stiff currents for 24 hours isn't enough of a challenge, those same factors prevent Fry from knowing exactly when her feat of endurance will begin. It could be as early as Sunday, but it could also be any day next week, depending on the tides, the winds and when her pilot — the skipper of the boat that will guide her — says it's time to go.

Yet Fry manages to tune out that distraction, too. "I'll have my laptop with me," she says cheerfully. "I'll probably get some work done."

Next: Swimming with a challenge. >>

Fry, a financial strategy consultant, is fortunate enough to have a job that gives her both flexibility and the necessary resources to afford the undertaking. (She says the total cost of her trip is about $10,000.) Still, the training has been intense. She's been practicing in her pool at the Westport Weston Family Y, where she has swum since she was a teenager, and has done six-hour swims every weekend in the open waters of Long Island Sound. She has also competed: In June, she broke the record for swimming from the tip of Manhattan to Sandy Hook, N.J., a notoriously tough, 17.5-mile course, which Fry completed in just over five hours.

Her steadiness, determination and level-headedness — or, she might joke, "empty-headedness" — in the water has enabled her to accomplish a lot. Those traits also have earned Fry enormous respect in the open-water swimming community.

"She's prepared to stick with it and fight through pain," says Morty Berger, founder of NYC Swim, which organizes swim events in the waters around New York City. "She never becomes real emotional out there, goes out there and grinds it out."

"Liz Fry," says veteran Dover pilot Eddie Spelling. "Now there's a woman with heart. If anybody can do a two-way [crossing], she can."

Swimming with a challenge

And she does all of this with a considerable disadvantage. Fry, like endurance swimmer Nyad, has asthma, a condition that was diagnosed in the 1990s, after she had coughed her way through the Seattle Marathon. (She was an accomplished distance runner for several years, before returning to her first love, the water.)

While she uses an inhaler, and will have one along on the boat during her double attempt, she's found that far from aggravating the problem, swimming has had a beneficial effect on her condition. "It's almost therapeutic, being close to the water," she says. The asthma "feels better when I swim."

Of course, there's swimming — and then there's swimming 42 miles. Anything can happen, especially in the Channel, notorious for its changeable weather and stinging jellyfish. While it may be a solo endeavor, one doesn't tackle the Channel alone. In addition to the pilot boat, Fry — who, by Channel-crossing rules and tradition, will not wear a wet suit — will have a support crew of family members and friends. Her sister Peggy will take care of her "meals" — energy gels and sports drinks every 45 minutes — and keep the world updated on her sister's progress.

Next: How to dive into exercise. >>

An observer from one of the associations that monitors cross-Channel swims will also be on hand to officially certify her back-and-forth completion, which doesn't include much of a stopover on the Continent. "I'll be there for about 10 minutes," says Fry. "The French don't really want you hanging around for very long in nothing but a Speedo."

While she has competed and set records in open-water swims in the United States, England and the Channel hold a special place in her heart. Fry's father, James, was English, and during World War II was one of only two survivors of a ship that was sunk. "He survived because he could swim," Fry says. "So all of his children were going to learn how to swim."

Which Fry did, along with her four siblings, on the beaches of Long Beach, N.Y. The family later moved to Connecticut, and while Fry swam in high school and at the University of Connecticut, she didn't have the scholarship opportunities that a talented young female swimmer today might have.

But she has no regrets. "When I get an opportunity to put my feet into the water off Shakespeare Beach to start this, I will be very thankful," says Fry. "To have the opportunity to do this, it's really a gift. I don't take it lightly."

"The hardest thing for every athlete, whether it's someone just starting out or someone who's been doing it all their lives, is just getting out the door," says open-water swimmer Elizabeth Fry, 52.

One way to get yourself moving, she says, is to find "something that gives you a sense of community." It could be a walking group, a morning exercise class at the local gym or, as Fry sees at her local Y, people doing aqua-size (water exercise). "It's 6 a.m. and they're already there and having a great time," she says.

Making exercise a habit is the most important thing. "You want it to become like eating breakfast," Fry says.

A tip for developing that exercise habit: When in doubt, get up. "When I get home, instead of plopping down in front of the TV, I try to do something … something that gives you that active, quiet time." So instead of sitting for 10 minutes, walk for 10 minutes. "Just tell yourself that you're going to feel better when you get back from that walk," she says. "And you will. You're always happier at the end of a workout."