En español | David Lawson first tried a recumbent tricycle when his chiropractor told him that commuting to his job at the University of California, Santa Barbara, on a mountain bike was wreaking havoc with his neck and posture. Lawson had been an avid mountain biker for years and was determined to find another exercise he enjoyed. 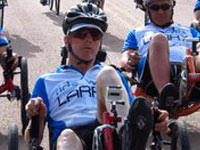 That was in 1996, when the recumbent bike was in its infancy. But Lawson found a bike store that carried them, tried the low-to-the-ground three-wheeler and fell in love.

"It was like sitting in a lounge chair," says Lawson. "Before, I was all tensed, with my shoulders to hold up." Now retired and 63, Lawson says, "If I don't get to ride every couple of days, I'm sad. I need that endorphin fix."

Today, more older riders than ever are riding recumbent trikes. As the price has come down, more younger buyers are trying trikes, but the 50-plus crowd continues to lead the trend. TerraTrike and Catrike, the two biggest companies that sell the style, estimate that at least 75 percent of their customers are over 50. It makes sense: Recumbent trikes benefit riders who experience many conditions common in older people.

The recumbent bike is clearly more comfortable to ride than an upright bicycle, but why add another wheel?

"The reason why trikes are the fastest-growing segment of recumbents is ease of use," says Jeff Yonker, marketing manager for TerraTrike. "Two-wheeled recumbents have a sharp learning curve for pedaling, balance, and starting and stopping." For many older riders, not having to worry about balance is a big plus. Anyone who pedals a trike for an hour can attest to the cardiovascular benefits. Why not be comfortable as you're getting exercise?

But if you think that because you're sitting comfortably, you're not getting much exercise, think again. The legs and heart are pumping just as they are on a regular bike. "I had my rheumatologist appointment today, and he was impressed with my heart rate," says Bob Cardone, 71, a lifelong biker who started to have problems with his neck and back after riding thousands of miles over the years.

And some older riders simply can't ride upright bikes anymore. For Cardone, who lives in the Atlanta area, "It was either stop biking altogether or ride a recumbent." He switched to a recumbent 12 years ago, choosing a trike because "it was much more fun."

Next: Upside and downside of recumbent trikes. >>

Because the rider is sitting with legs outstretched instead of in the more upright position of a regular bike, the cardiovascular benefits aren't quite as good, says Ben Hurley, professor of kinesiology at the University of Maryland's School of Public Health. But that's a trade-off many riders are willing to make for a ride that's easier on the knees and neck.

Another advantage trikes have over upright or recumbent two-wheelers is that they can be adapted to people with disabilities. The most common adjustable feature on a trike is a higher seat, says Peter Stull, owner of the Bicycle Man in Alfred Station, N.Y. "If a seat is 10 inches off the ground, it's difficult if someone has arthritis in the knees. Eighteen inches is better."

David Jaffe, 63, was looking for a change after he found the road bike he had ridden for years was making his knees hurt. He saw someone riding a recumbent trike and was intrigued. When he tried one, he found it was comfortable and very maneuverable. "Your right hand is on the shifter all the time, so you can change gears comfortably," he says. "Everything is ergonomically well done."

Jaffe chose a Catrike Villager, even though the $1,600 price tag was higher than others he looked at, because at 34 pounds it was lighter and he could put it into the trunk of his Honda Fit.

Larry Smith, a retired policeman and current breadmaker, was diagnosed with Parkinson's 20 years ago but was still able to ride a regular bike — until he fell off a couple of times. "One thing that goes with Parkinson's is balance," says Smith of Vermillion, S.D.

A couple of years ago he found out about recumbent trikes, bought one from his local bike shop and has been pedaling ever since. His doctor is very supportive; vigorous exercise can help keep Parkinson's at bay.

Smith rides every day, including a 65-mile ride from Sioux Falls to Vermillion in June to raise awareness of Parkinson's. Several hundred people will join him on the ride, and some family members are making a documentary about it.

Next: Buying a recumbent trike. >>

"When I'm riding, I don't have Parkinson's," says Smith, "because the balance issue is gone. It's just me and my muscles."

But you don't have to have a serious disease like Parkinson's to feel benefits from recumbent trikes. "For retired people who begin to question their physical ability, this is like the fountain of youth," says Santa Barbara biker Lawson. "It's like when you were a kid riding carefree around the neighborhood. That's what retirement should be."

There are two basic types of recumbent trikes.

Joan Mooney is a writer and book reviewer based in Washington, D.C. She previously reviewed Karen Armstrong’s Twelve Steps to a Compassionate Life and the Dalai Lama’s My Spiritual Life for AARP The Magazine.