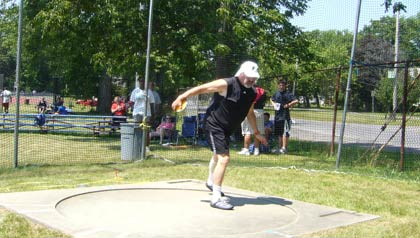 Steve Marcus loved competing as a discus thrower in high school. But he always lamented that he never won a medal in the sport.

So three years ago, he decided to do something about that. Marcus went online and bought a discus, drove over to a baseball field near his New Rochelle, N.Y., home and started throwing. Disappointed when he couldn't hurl the discus much farther than from home base to the pitcher's mound, he set off for a nearby high school and persuaded the track coach to give him a few lessons.

Those lessons paid off. Marcus, now 68, is headed this week to the USA Masters Outdoor Track & Field Championships in Berea, Ohio. About 1,100 athletes, 750 of them over age 50, are expected to compete at the four-day event.

"I didn't think much about throwing the discus all those years" after high school, says Marcus. "I was too busy making money, raising a family and living my life. But I always regretted not winning a medal back then because I'm a competitive guy and I remembered how much I loved it."

Marcus wanted to again master the many movements involved in discus throwing. "The [track] coach was wondering what she had on her hands," he says. "She was used to dealing with kids. But she was a good sport, and I kept getting a little better all the time."

In a few months, he was practicing five evenings a week as well as working out, lifting weights and riding a stationary bike. "Exercising for your health is fine," he says, "but exercising with a goal in mind gives it another dimension.

"Discus is a beautiful sport, there's something elegant about throwing it with the right form, kind of like hitting a golf ball that floats through the air in a perfect arc and lands just where it's supposed to."

When he could throw about 100 feet, Marcus signed up for the 2008 Connecticut Senior Summer Olympics, open to anybody over 50. He went home with a silver medal. "It was great," he says. "You compete against people in age groups starting at 50 to 55 and going all the way up to 85 to 89 and then 90-plus. There were only four or five people competing in my age group, and we had a lot of laughs. There are all kinds of events and gatherings, so you get to meet everybody. Some people do this for fun, but a lot of people, like me, take it far more seriously."

Next: Senior games are a social event. >>

A few weeks later, Marcus persuaded his wife, Emily, to accompany him to the Massachusetts Senior Games, where he won a bronze medal. "Now I was getting excited."

Then came the Eastern Regional Senior Summer Games in Rhode Island. This time, he came back with a gold medal. "The senior games are very social," Marcus says. "Everybody's more or less your age, men and women, most of them in their 60s and 70s, but you hang around with guys in their 80s and 90s, too, who compete in every kind of sport imaginable. It's amazing to see people 80 years old in running tights sprinting on the track or guys 95 years old with seven gold medals around their necks."

After competing at the National Senior Olympics, for which contenders must first qualify in state games, and coming in among the top 10, Marcus decided to get serious. He wanted to compete against world-class athletes so he chose this year's USA Masters Outdoor Track & Field Championships, which draws tough competition from all over the country. "I may actually have a chance this year, though," he says, "because two really great throwers in my 65-to-69 age group both just turned 70 and moved on up" to the next age group.

Meanwhile, between competitions Marcus does not sit around. The entrepreneur and marketing consultant sees no point in retiring — from anything. "I like to have an idea and make it happen," he says. "A group of us, mostly in our 50s and 60s, are trying to start up a new Internet business and find ourselves competing for venture capital money with guys maybe one year out of MIT or Stanford. We're probably the oldest entrepreneurs on earth!

"I don't let age hold me back, whether it's throwing the discus at 68 or starting a new business," Marcus says. "I'm going for it."

You may also like: Walking sticks help boomers stay active. >>