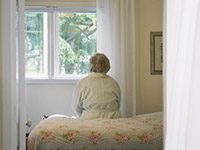 Writer Martin Bayne discusses what he calls the "ambient despair" of assisted living.

For nearly a decade now, since just before his 53rd birthday, Martin Bayne has lived in an assisted living facility.

Bayne, whose early-onset Parkinson's disease was diagnosed while he was in his 40s, talks with AARP Prime Time Radio host Mike Cuthbert about the realities of long-term living in an assisted living facility, and what he terms the "ambient despair" that permeates such environments.