Those rebound pounds seem to affect women's metabolism, causing their bodies to store more fat and increase their risk for cardiovascular problems. Researchers found that after dieting and then regaining, older women had elevated levels of cholesterol and insulin resistance, a warning sign for diabetes. 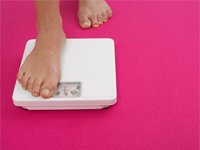 Will losing and regaining weight put you at risk for cardiovascular problems?

"We definitely don't want to say weight loss is bad," says study coauthor Kristen Beavers of the Wake Forest University School of Medicine, but she stresses the importance of having a maintenance plan to keep the weight off.

Beavers, a registered dietitian and geriatric medicine researcher, co-led a 17-month study of 80 overweight or obese postmenopausal women (average age 58) with biostatistician Daniel Beavers, her colleague and husband. The study, funded by the National Institute on Aging, was published online last month in the Journal of Gerontology: Medical Sciences.

The women in the study lost an average of 25 pounds each over five months by eating prepared low-calorie meals that the study provided them. As their weight dropped, they saw improvements in cholesterol, triglycerides and insulin levels, as well as blood pressure. At the end of the study, they had a counseling session with a registered dietitian. They then returned after six months and 12 months for physical measurements and blood tests.

After a year, about 70 percent of the women had regained some weight. And while most still weighed less than when they started, they tended to regain more fat and lose lean body mass, Kristen Beavers says. Alarmingly, weight regainers also showed higher levels of both total cholesterol and "bad" LDL cholesterol, as well as higher insulin resistance, Daniel Beavers adds.

But at least one expert believes the jury is still out on whether the cycle of losing and regaining weight really puts people at greater risk.

Kathryn Rexrode, M.D., an internist and Harvard University Medical School researcher, says that while the Beaverses' study makes "biological" sense, they didn't provide enough data to definitively show whether the increases in cholesterol and insulin resistance were significant.

Because the reported metabolic changes were small, "I'm not convinced of how statistically different they are," Rexrode says. "I don't think this should be held up to women or men to say, 'Don't even bother to lose weight because you'll end up worse than you started.' "

She also noted that the women lost weight primarily by cutting calories without adding muscle-training exercise. "If you do it this way, it is true you will lose both fat and muscle in the weight-loss phase," Rexrode says. "In the regain phase, it will be mostly fat."

Rexrode counsels her own patients to incorporate exercise into their daily routine because that has been shown to help maintain weight loss.

Because the study was primarily designed to see how weight loss affected metabolism, the researchers acknowledge that they did not focus on helping participants maintain their weight loss once the study had ended.

As Kristen Beavers explains, "A real strength of the study is that it was so controlled" — for example, providing meals to make sure everyone ate the same amount. "The downside was that we didn't teach [the participants] a thing."

She says her own research shows that maintaining a healthy weight needs to become "a lifelong obsession."

"Otherwise, there's this creep toward eating a little more," she says. "It takes a lot to keep that from coming back. It's an active process, not a passive process."