En español | The human brain is literally wired for habits. Pleasurable ones —drinking alcohol, smoking, eating good food—release the chemical dopamine in the brain, which in turn floods the body with good feelings. And repeated behavior deepens neurological grooves in the brain, making habits insanely difficult to break. 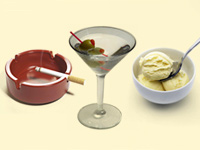 “Every time we use a habit, we etch it in,” says Omar Manejwala, medical director of the Minnesota addiction treatment programs at Hazelden, the renowned recovery clinic. “Eventually the grooves become so deep that they’re very hard to wipe away.” In fact, he continues, the human brain prefers habitual behavior, because it’s comfortable and familiar.

That's what makes this time of year, when many of us try to break bad habits and develop good ones, so hard. Too often, the brain sabotages our strongest resolutions. Here, doctors who help people overcome addictions —powerful, destructive habits—offer suggestions on how to rewire the brain to kick bad habits for good.

1. Figure out your trigger. There’s a reason you drink too much at parties or sit down with a pint of ice cream every night: It feels good. Whether it’s to ease anxiety (the drinks) or relieve loneliness (the ice cream), “habits are formed when a behavior is linked to an emotion,” says Virgilio Arenas, M.D., a specialist in addiction psychiatry at Northwestern Memorial Hospital in Chicago. Try keeping a diary to track exactly what emotion or event triggers a habit, and at what time of day.

2. Find a replacement habit.  People don’t really break habits; they just replace them. So, to break a bad habit, find a new, healthy one to replace it. Walk after dinner instead of watching three hours of television. Do a crossword puzzle instead of chewing on fingernails. Eat a banana, not a box of cookies, before bedtime. “Repeating a healthy behavior,” says Manejwala of Hazelden, is the best way to rewire the brain.

3. Look into the future. Don't allow yourself to get discouraged. Recognize that the immediate reward you get from the bad habit can be stronger than the delayed gratification that comes from kicking it. Is it any wonder that your attempts to break a habit can get stymied? “Feeling good now is more powerful than, ‘if I don’t smoke now, in a few months I’ll be able to breathe more easily,’ ” says Joseph Baschnagel, assistant professor of psychology at Rochester Institute of Technology in New York, who studies nicotine addiction. Successfully kicking a habit means retraining your mind to think not of instant gratification, but of future benefits.

Give yourself time. Research shows that the more times a smoker tries to quit, the more likely it is that she’ll quit for good. His advice: Keep trying, and don’t think of a backslide as failure. Call  it a “slip,” or “lapse,” Baschnagel says.  “Don’t see it as failure. If people think they’re failing, they give up.”

Next: Get support from your friends to kick that bad habit. >>

4. Keep the good habit going for three weeks. A fresh, new habit can be easy for two weeks. Then boredom sets in, as does the temptation to backslide. “We start rationalizing, we find reasons not to go to the gym because it’s not a new habit yet,” explains Coral Arvon, director of behavioral health and wellness at Pritikin Longevity Center in Miami. Soldier through that two-week mark, and don’t let setbacks (sneaking a smoke, too much birthday cake) provide an excuse to abandon your good intentions. See these as mere lapses. Swing back into the new habit. After three weeks, or 21 days, the new habit should become second nature, Arvon says.

5. Get support. Addicts lapse when they lack support, says Kevin Kappler, a California psychologist who specializes in drug and alcohol addiction. To help break a habit, find professional support—a doctor, a weight loss program, even therapy—and ask for support from friends and family “who encourage and reinforce positive changes,” he says.

6. Exercise. Research shows that regular exercise raises the level of a key protein dubbed BDNF, which encourages the growth of new neurons in the brain. And new neurons are essential to rewiring the brain for healthy habits, says Subhash Pandey, director of neuroscience alcoholism research at the University of Illinois at Chicago. Indeed, low levels of this key protein are linked to alcoholism and other destructive habits, Pandey notes.  But here’s the good news. To create those new neurons, exercise “doesn’t have to be a marathon,” he says. Regular walking will do it.

You may also like: Save money and work out at home.

Lisa Bertagnoli is a freelance writer who lives in Chicago.