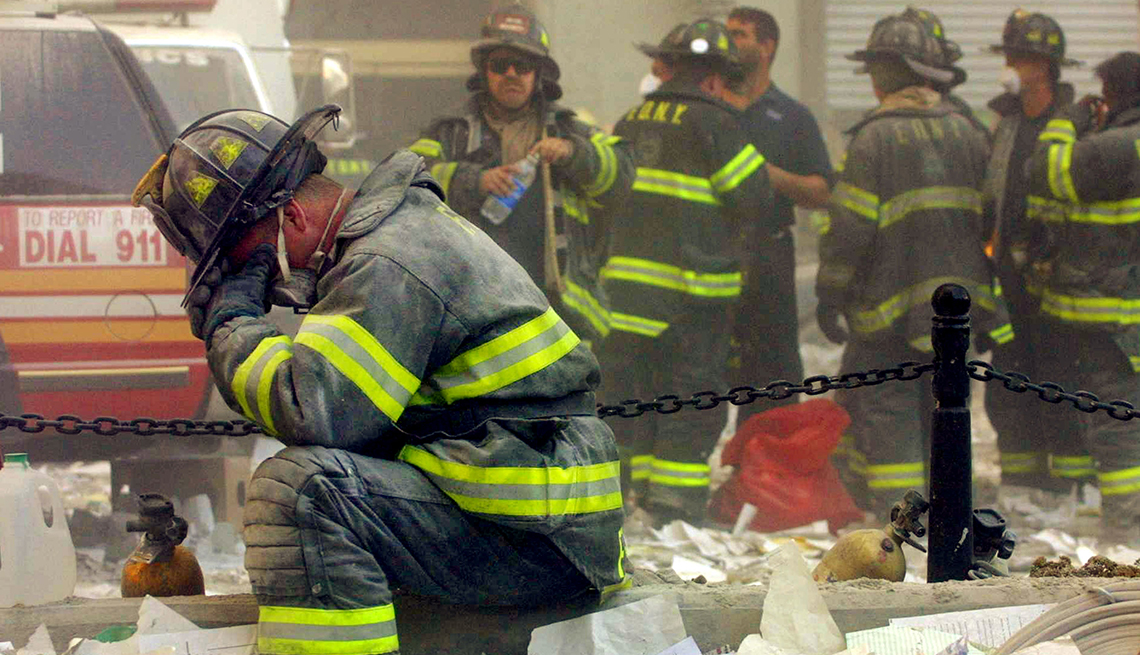 A firefighter on Sept. 11, 2001, after the terrorist attacks on the World Trade Center.

More than 41,000 claims have been filed with the Department of Justice’s September 11th Victim Compensation Fund (VCF), but myths about the program mean that some people who are eligible may be missing out on much-needed compensation. With all claims, including supporting documentation, due by Dec. 18, 2020, the fund is urging people to start the process by registering sooner rather than later.

“One of the biggest misconceptions is that the fund is limited to first responders, and it’s not,” said VCF Special Master Rupa Bhattacharyya. “It’s much, much broader than that.”

In addition to first responders, the VCF also compensates those who volunteered, lived, worked, went to school or spent time in the NYC Exposure Zone surrounding Ground Zero in Lower Manhattan or on routes of debris removal between Sept. 11, 2001, and May 30, 2002.

These people may have suffered injuries or developed health conditions, such as asthma, chronic obstructive pulmonary disease (COPD) or certain types of cancer, as a result of their exposure to debris from the attacks or the subsequent cleanup efforts. You may also be eligible to file a claim on behalf of a deceased victim, a minor or an adult who is incapacitated as a result of the attacks.

Discover the best health insurance coverage options for your family and learn about Medicare, Medicaid, the ACA and more.

Compensation is capped at $250,000 for any one type of cancer and at $90,000 for a noncancer condition. Generally speaking, health conditions must be certified through the World Trade Center (WTC) Health Program in order to proceed with a VCF claim.

This process, Bhattacharyya said, is another common source of confusion: People often think that enrollment in one program automatically registers them with the other, which isn't true. The WTC Health Program is separate from the VCF, and has its own eligibility and registration requirements.

The VCF also compensates for economic loss, including lost wages and employer-provided benefits such as pension payments. According to VCF spokesperson Nicole Navas Oxman, compensation has ranged from $500 to $4.1 million for personal injury awards, and from $10,000 to $3.25 million for deceased claims.

To date, the VCF has awarded nearly $4.3 billion in total compensation. The program's funding is capped at $7.4 billion, unless Congress acts to grant it additional money.

The VCF urges any eligible individuals who have not yet registered to do so today by going to vcf.gov or calling 855-885-1555. The first step in the process is registration, which requires no documentation and allows — but does not obligate — you to file a claim by the 2020 deadline.