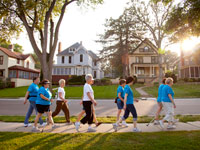 This is a sidebare with some text and an image

There's a song that goes, "Love is lovelier the second time around." But back in the '70s, I hadn't even gone around the first time. The truth is, I didn't think matrimony was so great for women. "Marriage is like a vacuum cleaner," I used to say. "You stick it to your ear and it sucks out all your energy and ambition."

You could WIN $25,000 by taking a short preference survey.

Then, as you may know, I went on this talk show and met the host: a handsome, charming Irishman named Phil Donahue. We had dinner shortly afterward, and he revealed that he'd recently gone through a divorce and doubted he'd ever marry again.

How perfect, I thought. A man who thinks like me.

Looking back, I think one of the reasons our relationship blossomed into more than either of us had thought it would — including marriage, three years later — is that we weren't burdened by the pressure felt by younger people looking for mates.

Of course, being older, we also had challenges that younger people don't face — primarily, reconciling two lives that had been lived for a while. He had a career in Chicago and lived with his four sons; I had a career in Los Angeles and family roots there. Even a simple dinner required a plane ride.

But we began to make room for each other in our lives and created what felt like … a family. Along the way, we learned something fundamental: that sometimes we all must rethink our lives, focusing not on what we thought they would be but, rather, on what they could be.

It's a subtle distinction, but I've seen it time and again. It took my pal Maggie two marriages to discover that she didn't need a husband; she needed a "kindred spirit." She found one 12 years ago — and has been with him ever since.

My friend Nancy readily confesses that even though she has been married to the same man for 40 years, she didn't truly fall in love with him until after the kids went off to college, when the two of them had the time to get to know each other. Funny, isn't it?

And, of course, my soul sister Gloria Steinem — who swore she'd never wed — found the love of her life at 66 and married him. "Though I've worked many years to make marriage more equal, I never expected to take advantage of it myself," Gloria said in 2000. "I hope this proves what feminists have always said — that feminism is about the ability to choose what's right at each time of our lives." (Sadly, her husband, David Bale, died of cancer in 2003.)

Had Phil and I been younger, we might have been more impatient and missed each other. But being older — me in my late 30s, Phil in his early 40s — we trusted our hearts and made the effort. For many, love really is better the second time around, but for me, the first time has been just fine.

Born between 1946 and 1964, they're the baby boomers — the "Me Generation" to some, the generation of political upheaval (the civil rights movement, women's movement, antiwar movement, environmental movement, gay rights movement and more) to others. Whether you believe their youth was a time of liberation or of wretched excess, the sheer size of the baby boom generation has made it a source of endless fascination.

Now all eyes are on the boomers' present and future, rather than their storied past. Watch this preview of Boomers 2.0: A Generation Re-Imagined, our new documentary, premiering on RLTV on Thursday, Jan. 31, and featuring commentary from, among others, AARP The Magazine's Editor-in-Chief Nancy Perry Graham. The Boomers 2.0 documentary will be rebroadcast numerous times after its premiere. Check the RLTV schedule for a time that suits you best.