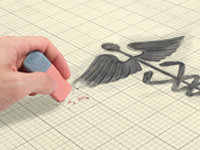 An appeals court Friday ruled against a key element of the Affordable Care Act.

"The courts weighed the same statutes, the same arguments and the same cases," says Jane Perkins, legal director of the National Health Law Program, a public interest law firm based in Washington. Despite the similarities, the 6th Circuit Court of Appeals based in Cincinnati upheld the health care overhaul, and the 11th Circuit based in Atlanta struck down its central provision, the individual mandate requiring virtually everyone to have insurance by 2014.

The Supreme Court surely will have the last word — but when?

Many court watchers hope the court will resolve the issues in the term that begins Oct. 3 and will rule when the term ends next June.

"But there remains at least a decent chance that the court does not grant [review to] any of the cases until after January 2012, which would likely mean … a decision in the spring of 2013," Bradley W. Joondeph, a law professor at Santa Clara University, writes in his blog about health care reform litigation.

As attention shifts to timing at the Supreme Court, one question is whether the court wants to be seen as a factor in the 2012 elections. A ruling next summer could obliterate President Obama's signature legislative achievement just before he runs for reelection. A decision that comes after the 2012 presidential election could work to the advantage of the health care law's supporters and Obama.

In the meantime, the Affordable Care Act remains in effect, although Republicans in Congress want to repeal it and many states are balking at implementation. Members of at least 45 state legislatures have proposed bills to limit, change or oppose selected state or federal actions, according to the National Conference of State Legislatures.

People who are 50-plus have much at stake in the judicial and political wrangling, especially those without insurance who are not yet eligible for Medicare. In 2014, under the law, insurance companies can no longer deny coverage for people who have prior or current medical conditions, and the law provides subsidies to help low- and middle-income families buy insurance.

For those in Medicare the law has several key provisions.

It guarantees basic benefits for everyone in Medicare. It gradually closes the Medicare Part D "doughnut hole," the gap in coverage of prescription drugs, starting this year with a 50 percent discount on brand-name drugs. Now, Medicare also provides free annual wellness visits and preventive screening tests, such as mammograms and colonoscopies. The law also aims to help older people with disabilities stay in their own homes and out of nursing homes through a new Community First Choice Option that starts Oct. 1.

Next: A conservative rallying cry. >>

Still, the act has become a conservative rallying cry, and more than two dozen lawsuits have been filed in federal courts since Obama signed the law in March 2010, says the Kaiser Health Network, which is tracking 26 cases.

The most prominent case was brought by mostly Republican officials in 26 states, the National Federation of Independent Business and two individuals. On Aug. 12, the 11th Circuit Court in Atlanta ruled 2 to 1 that Congress overstepped its constitutional authority in requiring everyone to have insurance by 2014 or pay a financial penalty.

The ruling was the biggest blow yet for the Obama administration's health care overhaul, but the news wasn't all bad. The 11th Circuit court refused to strike down the entire Affordable Care Act as the district court judge in Florida had done. The appeals court also upheld an expansion of Medicaid under which about 16 million Americans will gain health care coverage.

Earlier this summer, the 6th Circuit in Cincinnati sided with Obama in a 2-to-1 ruling upholding the law. Plaintiffs in that case have appealed to the Supreme Court. The Obama administration has until Aug. 29 to respond to the petition.

After the fiercely partisan battles over passing the law, the bipartisan nature of the appellate decisions has surprised some. In the Cincinnati court, conservative Republican Judge Jeffrey Sutton, appointed by President George W. Bush, joined with Democratic Judge Boyce F. Martin Jr., a Jimmy Carter appointee, in support of the law.

"These two decisions put a pin in the balloon of the idea that the courts would be politically motivated," says Perkins of the health law program, who wrote a friend-of-the-court brief in the multi-state case supporting the law.

Two other cases have reached the appeals court level, and a ruling in both is expected soon from the 4th Circuit in Richmond. The cases challenge the individual mandate and have been combined.

If the Obama administration wants to slow the process, Joondeph says, it could wait the full 90 days allowed before filing a request-for-review petition of the 11th Circuit decision at the Supreme Court. Orin S. Kerr, a law professor at George Washington University and former clerk for Justice Anthony Kennedy, thinks the Supreme Court is in no hurry to hear the case.

"The lower courts are just beginning to evaluate the constitutionality of the mandate, and each new opinion is adding fresh perspective. … In Supreme Court lingo, the justices will want the issue to 'percolate,' " Kerr wrote in a blog that covers the Supreme Court.

Also of interest: Where AARP stands on health care and you. >>

Marsha Mercer is a writer in Northern Virginia who covers public policy issues.