En español | The Obama administration celebrates the new health care law's first birthday on March 23 — amid a swirl of court challenges and Republican attempts to repeal it that has left one in five Americans believing the law already has been repealed.

But while tweaking some details of the Affordable Care Act, government officials are rolling out its early provisions and laying the groundwork for the main ones scheduled to start in 2014. "We have a law and we will continue to implement it," Health Secretary Kathleen Sebelius maintains. 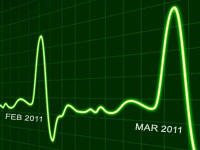 Meanwhile, the law's supporters point to new benefits that have already gone into effect, including:

It's unclear whether these popular measures could survive if the law is finally overturned. Among the legal challenges, so far three federal judges have ruled that its cornerstone — the unpopular requirement for everyone to have insurance or pay a fine — is constitutional while two others have held that it is not. The issue will ultimately be decided by the Supreme Court.

In Congress, the new GOP-controlled House's vote in January to repeal the law outright was seen as a symbolic gesture that had no chance of being enacted — at least as long as Democrats continue to control the Senate and the White House. But it gratified the Republicans' conservative base.

And it had an impact on public opinion. Almost half of Americans think the law is no longer in effect (22 percent) or don't know if it is or not (26 percent), according to a February poll by the Kaiser Family Foundation, a nonpartisan research group. This disconnect between fact and belief does not surprise public opinion experts.

After President Bill Clinton was impeached by the House and acquitted by the Senate 12 years ago, "it was the same thing — 30 percent of people believed he'd be removed from office," says Robert Blendon, professor of health policy and political analysis at Harvard's School of Public Health. "They see the headlines but don't understand the [legislative] process."

Failing repeal, Republican leaders have vowed to block or delay implementation of the act. "That includes cutting off funding for implementation, tying down administration officials like Sebelius who are responsible for it by having them testify all the time, and encouraging state governors to drag their feet," says Norman Ornstein, an expert on congressional procedures at the American Enterprise Institute, a Washington think tank. "This is not a good faith effort to try to engage on health care. It's a guerrilla war."

<p>Failing repeal, Republican leaders have vowed to block or delay implementation of the act.</p>

Most Republican state governors also oppose the law but face a dilemma. The law gives the states money — around $1 million each — to set up health insurance exchanges so that they can start functioning by 2014. The exchanges, another cornerstone of the law, are intended to help self-employed or uninsured people or those between jobs to buy health coverage from private insurance companies at lower rates than they could get on their own. But if the states fail to set up their own exchanges, under the law the federal government will do so instead and call more of the shots. "The governors are really between a rock and a hard place here," Ornstein says.

At a meeting of the nation's governors in late February, President Obama offered what some observers call a compromise and others call a political challenge. He said he was willing to let any of them opt out of the law — on certain conditions. "If your state can create a plan that covers as many people as affordably and comprehensively as the Affordable Care Act does, without increasing the deficit, you can implement that plan," he said. "And we'll work with you to do it."

Republican leaders have consistently maintained that the law will increase the deficit. Rep. Paul Ryan, delivering the GOP's response to Obama's State of the Union address, described it as "accelerating our country toward bankruptcy." Democrats cite an official estimate from the nonpartisan Congressional Budget Office, which must work out the likely costs and savings of any legislation, saying the law will reduce the deficit by $210 billion over 10 years, whereas repeal would increase it by the same amount.

Next: Public opinion has not changed significantly. >>

Over the first year of the law's life, public opinion has not changed significantly, with more Americans, especially Republicans, still disapproving than favoring it. Yet 55 percent oppose the Republican idea of cutting off funding for it, compared with 35 percent in favor, according to a recent CBS News poll.

"There's confusion," says Blendon, attributing this mostly to the law's main provisions not going into effect for several more years. "Medicare was in effect one year after it was enacted. So you could like Medicare or not, but a year later it was running, doctors were being paid and millions of people had access — it was a reality in life." But people who oppose the health reform law "are worried about its future impact," he adds. "There's a lot of skepticism, and you can't answer it because it won't be until 2015 that we'll even know what the major effects will be."

Before then, the law's ultimate fate could be decided by two events — the 2012 general election and, even earlier, the Supreme Court's ruling on the act's constitutionality. Blendon predicts that if the court holds that the requirement for everybody to have insurance is unconstitutional but allows the rest of the law to stand, Americans will remain strongly divided. But if there's a clear vote — better than a 5-4 split — upholding the constitutionality of the whole law, "then I think it would shift the weight of opinion closer to the president."