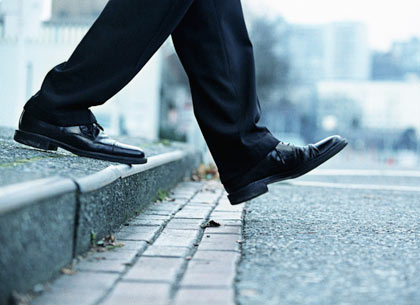 On the morning of her 66th birthday, Verlene Benzing went out for a long walk through downtown Orlando, Fla., with her husband, Norman. Only one of them would come back alive.

They were strolling along South Orange Avenue—a major traffic artery full of cars zooming through the heart of the city—when they reached a spot where the sidewalk narrowed. Norman, always the gentleman, stayed to the outside, closest to the street.

In a flash, a car driven by a woman—later determined to be under the influence of drugs—jumped the curb and struck 67-year-old Norman from behind, running him over and killing him.

“She just clipped him,” Verlene Benzing said last week in recalling the October 2007 accident. “He went flying through the air and I didn’t get touched.”

The story of the Benzings—an active, physically fit couple beloved by scores of friends and neighbors—is just one of thousands of human tragedies buried within the statistics of a new national study released this week about what it calls an “epidemic” of preventable pedestrian deaths.

The report—titled “Dangerous by Design”—is a joint effort of the Surface Transportation Policy Partnership and Transportation for America, two groups advocating for more federal transportation dollars to be dedicated to making roads safer for pedestrians. The project was guided by a steering committee that included representatives from AARP and several other organizations, including the American Public Health Association, America Bikes and Safe Routes to Schools National Partnership.

According to the study, older Americans are two-thirds more likely than those under age 65 to be killed while walking. In 2007 and 2008, persons over 65 represented 18 percent of all pedestrian fatalities, while making up just 13 percent of the population as a whole.

The report ranked the Benzings’ hometown of Orlando as the most dangerous metropolitan area for pedestrians in the United States in the study period of 2007 to 2008. More than 9,000 pedestrians were killed on U.S. roadways in those two years.

Three other Florida regions captured the next three rankings, making pedestrian safety a special concern in the state with the nation’s highest percentage of residents over age 65 (17.4 percent).

The 10 most dangerous metro areas for walkers:

These Southern cities—many of them retirement meccas—don’t necessarily have the highest absolute numbers of pedestrian deaths. But they all score high in what the study calls the “pedestrian danger index” because they tend to have fewer pedestrians overall, meaning the risk is relatively higher for those who do choose to walk.

“These are places that tend to be dominated by lower density, auto-oriented development patterns, which include high-speed urban arterials that are particularly hazardous for walking,” the report says.

The study also suggests three factors that may be behind higher death rates for older pedestrians:

* They are less likely to survive a collision with a car or truck.

* They are less agile, making it harder to get out of the way of danger when it crosses their path.

* Existing safety measures—such as the duration of crosswalk signals—often ignore the needs of older walkers.

Studies about pedestrian safety done in the past have reached similar conclusions with similar city rankings.

Despite the report’s characterization of the issue as an epidemic, there have been some signs of progress. Since the policy partnership issued the first of a series of reports called “Mean Streets” more than a decade ago, the number of pedestrian deaths nationally has steadily dropped—from 5,321 in 1997 to 4,378 last year, according to federal traffic fatality data.

And the latest report highlights one Florida area—St. Petersburg—which has responded to its poor safety ranking with an ambitious program to develop more walking and cycling trails as well as sidewalks and crosswalk enhancements. But the most persistent pedestrian safety issues are embedded in road designs that are hard to undo in a hurry.

“Florida was laid out at a time when we were building our towns around the automobile—the distances were long, the streets were wide and fast and there were no sidewalks, bike lanes or shoulders,” said Dan Burden, an Orlando-based planner with the firm Glatting Jackson Kercher Anglin. “But you can’t take 90 percent of the infrastructure and turn that around overnight.”

Burden believes market forces eventually will create consumer demand for the kind of higher-density, pedestrian-oriented communities that will promote “aging in place” and help pull Florida cities off the top of lists like this. But the sponsors of the new study say there needs to be still more urgency in addressing the issue from the government side as well.

“It’s true that we’re not going to be able to change the basic layout of places that were built quickly and with too little thought,” said David Goldberg, Transportation for America’s communications director. “But with the right level of investment and attention to this problem, it would be possible to retrofit dangerous arterial roads, to implement sidewalks, crosswalks, more crossing signals … and scale back roads that are too wide and don’t need to be wider.”

Goldberg said many state highway departments stubbornly refuse to change their ways even as the federal government has given them more flexibility to spend road dollars in ways that improve safety for pedestrians and bicyclists. Noting that a new federal transportation bill is now in the works, he said more pressure is needed to make safer designs not just an option but a mandate.

“The states are still not spending the money in ways they are allowed to spend the money,” Goldberg said. “It’s past time for the federal government to be passing out more money to build more dangerous facilities. It’s time to start retrofitting and fixing the problems that have been built with federal money in the past.”

On that front, the study found that the average metropolitan area spends just 2.2 percent of its federal transportation funds on projects that help make walking and biking safer. But there has been some progress over the past decade, with the nation’s 52 largest metro areas having increased such spending from 82 cents per person to $1.39 per person.

The issue of pedestrian safety can’t be put on hold any longer—especially as America’s population continues to age, said Jana Lynott, a strategic transportation policy adviser for AARP. She called the report “a huge wake-up call. We can’t wait another 30 years to make these changes happen. People should be looking at where states have decided to spend stimulus dollars for transportation. If the argument is they don’t have shovel-ready pedestrian projects, the answer is, why not? We’ve known about this for 10 years.”

Safety and livability are among the key factors being considered as the federal government awards $1.5 billion in discretionary grant money for transportation projects as part of this year’s economic stimulus package, according to Sasha Johnson, press secretary for the U.S. Department of Transportation.

“A key mission of ours is to make communities more livable so people can walk or bicycle from their homes to nearby commercial centers, bus stops or commuter rail stations,” she said.

The department will also push for these priorities as Congress tackles the reauthorization of the surface transportation program. And with other priorities and programs competing for dollars in the federal budget, it’s hard to predict how much money will be dedicated to making dangerous streets safer.

For people who love to walk, such as Verlene Benzing, any improvements in road designs to make them safer for pedestrians can’t come soon enough. Now 68, she still walks regularly with friends two years after she lost her husband, Norman.

She and Norman used to walk all over town “miles and miles at a time.” Now, she said, she rarely goes more than three miles. But she never goes near a particularly hazardous stretch of busy road with its narrow strip of sidewalk that changed her life forever.

“I do not walk on Orange Avenue,” said Benzing.

Sean Holton is a freelance writer based in Orlando, Fla.