En español | A unique treatment that uses insulin in the form of a nasal spray shows promise for boosting memory in men and women with Alzheimer's disease, according to a study released in the Sept. 12 online edition of the Archives of Neurology.

In a four-month study, participants with either mild or moderate Alzheimer's disease or mild cognitive impairment who received a low dose of insulin fared better on memory tests than those who received a placebo. 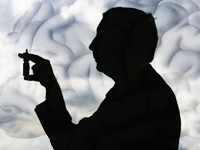 Experts say that these encouraging results should lead to a larger clinical trial to confirm effectiveness of the treatment.

Researchers selected 104 men and women for the study. All had either mild to moderate Alzheimer's or mild cognitive impairment, a condition that increases the risk of developing Alzheimer's, especially when memory is affected. The participants were divided into three groups. Using a nasal spray, each group received twice-daily doses of either lower or higher doses of insulin or a placebo.

The study found that men and women who used the lower dose of insulin nasal spray tended to score better on memory tests than those who used the placebo. No improvement was seen in those receiving the higher insulin dose. Both groups receiving insulin preserved their level of daily functioning, according to reports from their caregivers, while participants in the placebo group showed an overall decline in function. Few side effects occurred among those treated with the insulin spray, other than occasional light-headedness and dizziness or stuffy nose.

Over the past 10 years scientists have come to learn that insulin plays an important role in the brain, says clinical neuroscientist Suzanne Craft, of the Veterans Affairs Puget Sound Health Care System and the University of Washington School of Medicine. It helps the brain form memories, allows brain cells to communicate with one another and manages levels of brain chemicals.

All cells, including those that make up the brain, use glucose for energy. The hormone insulin makes it possible for glucose, aka blood sugar, to enter cells, enabling them to work properly. With age, however, many people develop a problem called insulin resistance, a condition in which the body and the brain do not use insulin effectively.

If glucose cannot enter brain cells, the cells won't carry out their tasks related to memory and thinking. "This sets the stage for problems in brain function that may develop into conditions like Alzheimer's disease," says Craft, lead author of the study. She and her colleagues set out to determine whether providing insulin directly to the brain could improve the cell's ability to use insulin.

Next: How to reduce your risk of developing insulin resistance. >>

Tracking down the connection between diabetes and Alzheimer's is akin to landing in the middle of an old Dragnet episode on television where Jack Webb, playing cop Joe Friday, intoned,"All we want are the facts, ma'am." Scientists understand that the two diseases are related, but they are still investigating the reason behind it.

"Many studies have linked the two diseases," says neurologist Sam Gandy, M.D., of Mount Sinai Medical School in New York. But diabetes and Alzheimer's are complex conditions, and the biological reason for the link is unclear. "The link seems to be related more to type 2 diabetes than type 1, and a key feature of type 2 diabetes is insulin resistance," he says.

Last year Gandy's laboratory studied the first gene linked to both Alzheimer's and type 2 diabetes and showed that a defect in that gene in mice is associated with the accumulation of plaques that are the hallmark of Alzheimer's.

Now Craft and her colleagues have successfully demonstrated that the nasal insulin spray "stabilizes or improves cognitive function in mild cognitive impairment or mild Alzheimer's," says Gandy. "These results must be confirmed independently, of course, before they can be accepted as fact. But if they are, although this was considered an unconventional approach, we would have a clear, plausible pathway for developing novel therapies for Alzheimer's."

William Thies, chief medical and scientific officer of the Alzheimer's Association, cautions that this is a preliminary study but notes that the results are encouraging enough to warrant a larger and longer trial. "At this point we don't have a definitive therapy for Alzheimer's, so it's good to be able to identify another direction to look for potential treatments," he says.

What to do now?

As yet, there is no cure for Alzheimer's, but preventing the development of insulin resistance through a healthy diet and exercise is an achievable goal, notes Craft. "You'll derive a benefit no matter when you start," she says. And you'll help not only your mind but your body as well.