Here's some bad news for the millions of older women who regularly take calcium supplements in hopes of warding off osteoporosis: There is growing evidence that the pills significantly raise the risk of having a heart attack.

The good news is that getting your calcium the old-fashioned way — from food — actually seems to protect against heart disease, while providing bone-strengthening benefits. 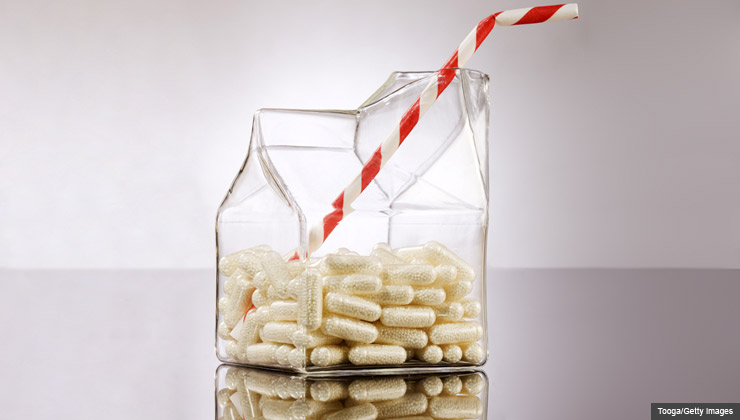 Get your calcium from food rather than supplements to reduce your risk of getting a heart attack.

Those paradoxical findings come from a newly published study of nearly 24,000 German men and women whose dietary preferences were followed for 11 years.

The study found that daily use of supplements containing calcium increased heart attack risk by 86 percent. But supplement use did not affect the risk of stroke or death from cardiovascular disease, according to Sabine Rohrmann, a nutritionist and epidemiologist at the University of Zurich and coauthor of the study published in the journal Heart.

Meanwhile, people who consumed 820 milligrams of calcium a day from food — more than half of which typically came from dairy — had a 30 percent lower risk of heart attack than those who got the least amount of calcium, Rohrmann says. The 820-milligram amount seemed to be a sweet spot: Those who took in even more calcium from food (about 1,130 milligrams daily) saw no further reduction in heart attack risk, she adds.

The new findings echo other recent research highlighting the potential heart risk from calcium supplements, says Ian Reid, M.D., a professor at the University of Auckland medical school in New Zealand who has coauthored several studies on the subject. He believes that calcium taken in highly concentrated form causes a spike in blood levels that damages the arteries. Calcium in food is absorbed more slowly, however, leaving blood levels unchanged.

The latest study focused on residents in the German city of Heidelberg who were between the ages of 35 and 64 when they were recruited starting in 1994 for the European Prospective Investigation into Cancer and Nutrition. They regularly filled out questionnaires about the foods they ate and the supplements they took. The researchers also examined combination supplements, such as calcium and vitamin D, Rohrmann says, but concluded that calcium — whether alone or in combo with vitamin D — was linked to heart attack risk.

Rohrmann does add a caveat: The scientists don't know exactly how much calcium participants got from supplements because they weren't asked what size dose they were taking. "We guessed that the intake is about a thousand milligrams per day," she says. It's unclear whether there might be a safe lower calcium supplement dose. But if a doctor prescribes calcium supplements, she recommends dissolving the pills in a bottle of water or juice and sipping from it throughout the day. That way, she says, "Your actual dose per intake is getting smaller."

Reid says the case for preventing osteoporosis with calcium supplements is overblown — it only decreases fracture risk by about 10 percent. He counsels his own patients to boost their calcium intake from dietary sources. "There are a number of food sources that are acceptable to the majority of people," he says. In addition to dairy products, foods like broccoli, spinach, nuts and tofu are rich in calcium.

"A decade ago the enthusiasts were saying people should have 1,500 milligrams of calcium a day," Reid says. A "more sensible target" is probably 600 to 800 milligrams per day, he says. "The majority of elderly people can probably achieve that."