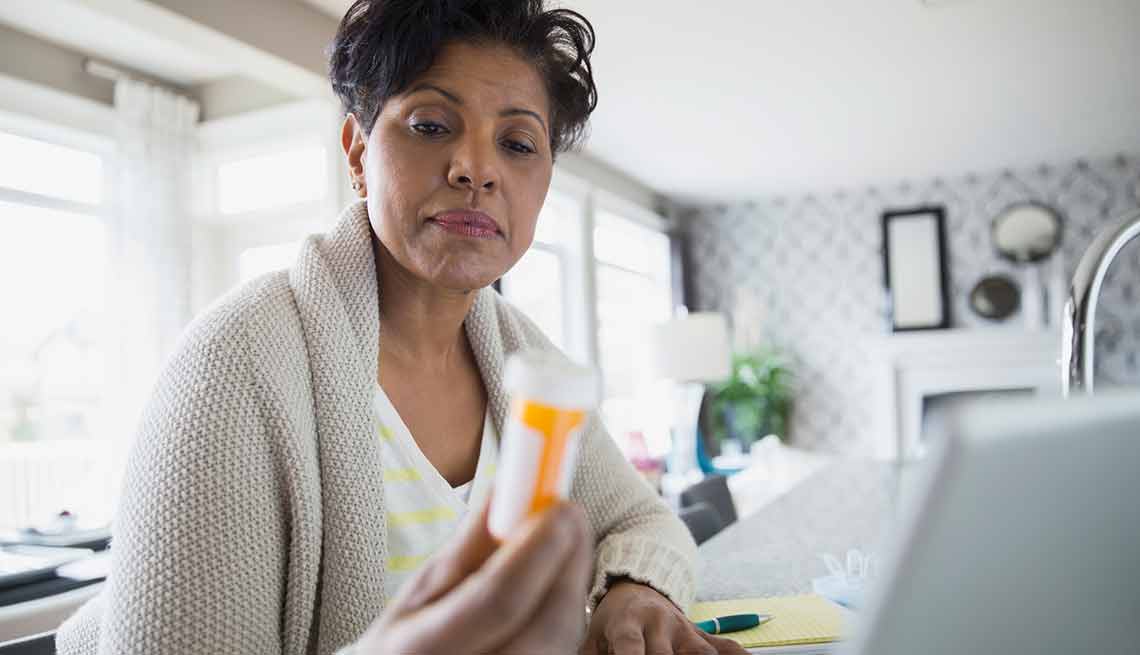 Are your medications making you feel sleepy?

En español | Do you feel weak or tired — sometimes to the point of exhaustion — much of the time? If so, you’re not alone. Chronic fatigue accounts for more than 10 million visits to family doctors every year.

Chronic fatigue has many causes, including illnesses such as anemia and multiple sclerosis as well as depression and other psychiatric disorders. But it’s also often a side effect of drugs previously prescribed for other conditions. (I’m not talking here of the complicated disorder known as chronic fatigue syndrome, whose cause is unknown. This condition is characterized by extreme fatigue that can’t be explained by any underlying medical condition.)

Could one or more of the medications you’re taking be making you feel listless or lethargic? Read below to learn about the major classes of drugs that can cause chronic fatigue. If you suspect that your symptoms might be linked to a medication you’re taking, talk to your doctor or health care provider right away. It’s important that you do not discontinue them on your own.

Why they’re prescribed: All blood pressure medications — and there are at least eight categories of them — are used to lower the pressure inside blood vessels, so the heart doesn’t have to work as hard to pump blood throughout the body.

Top-selling blood-pressure medications include lisinopril (Prinivil, Zestril), an ACE inhibitor; amlodipine (Norvasc), a calcium channel blocker; hydrochlorothiazide (HCTZ and various other brand names), a thiazide diuretic; furosemide (Lasix), a loop diuretic; and metoprolol (Lopressor, Toprol), a beta blocker. Fatigue is also one of the most common side effects that occurs with aliskiren (Tekturna, Tekturna HCT), which belongs to a newer class of drugs called renin inhibitors.

How they can cause fatigue: Blood-pressure medications may slow down the pumping action of the heart as well as depress the entire central nervous system, or, in the case of diuretics, deplete electrolytes that the body needs.

Check the safety information that comes with your blood pressure medications and you may well see “extreme tiredness” listed as a side effect. That’s an important sign that your fatigue could be drug-induced.

Alternatives: Talk with your doctor or other health care provider about switching to another type of blood pressure medication. For older patients, a benzothiazepine calcium channel blocker, such as diltiazem (Cardizem), is often the best choice.

An omega-3 fish oil supplement may help to lower your blood pressure, too. Be aware, though, that omega-3s can slightly raise levels of LDL or bad cholesterol, and other research has shown these may increase the risk of prostate cancer.

A natural benefit: Omega-3 fatty acids are also thought to be natural fatigue fighters. One 2015 study shows that metabolism increased while resting and exercise heart rate dropped in older women who took omega-3 supplements that contain 2 g EPA, 1 g DHA for 12 weeks. However, whether omega-3 actually improves resting metabolism and exercise heart rate remains unclear because there are many conflicting studies.

Why they’re prescribed: Statins and fibrates are used to treat high cholesterol. The top-selling statins are atorvastatin (Lipitor), rosuvastatin (Crestor) and simvastatin (Zocor); the top-selling fibrate is fenofibrate (Tricor).

Muscle weakness and severe muscle aches throughout the body can be symptoms of statin-induced rhabdomyolysis, a rapid breakdown of skeletal muscle that causes muscle fibers to be released into the bloodstream. A substance called myoglobin within the muscle cells that is released can result in severe kidney damage and even kidney failure.

Alternatives: If you’re among the many millions of older Americans without known coronary disease who are taking these drugs, ask your doctor or other health care provider about treating your slightly elevated cholesterol with a combination of sublingual (under-the-tongue) vitamin B12 (1,000 mcg daily), folic acid (800 mcg daily) and vitamin B6 (200 mg daily). Also, red yeast rice, a supplement first used in traditional Chinese medicine, has been found to be almost as effective as some of the moderate statins when used for short periods of time. But it also may cause some of the same muscle problems as the pharmaceutical products.

Why they’re prescribed: Proton pump inhibitors are used to treat gastroesophageal reflux disease (GERD) and other similar disorders. More than 20 million Americans take prescription PPIs, including esomeprazole (Nexium), lansoprazole (Prevacid), omeprazole (Prilosec) and pantoprazole (Protonix), some of which are available over the counter.

How they can cause fatigue: Patients who take PPIs for as little as three months are at risk of low blood levels of magnesium, which can cause loss of appetite, fatigue and weakness, among other symptoms.

Alternatives: The FDA has advised doctors and other health care providers to obtain serum magnesium levels before prescribing PPIs and then periodically thereafter.

If you need to discontinue a PPI, you must do it very slowly.  If you stop suddenly, you risk having GERD come back with more severe symptoms. Under your doctor’s guidance, you’ll gradually drop the dose in 20 mg increments, with 10 to 15 days between each taper, until you are completely off the drug. In some people the process takes even longer.

If you still have severe reflux problems, you and your doctor may want to consider the use of an H2 blocker such as ranitidine (75 mg every 12 hours as needed).

Why they’re prescribed: Benzodiazepines, commonly known as tranquilizers, are used to treat a variety of anxiety disorders, agitation and muscle spasms, and to prevent seizures. Because benzodiazepines have a sedative/hypnotic effect, they are sometimes used to treat insomnia and the anxiety component of depression.

How they can cause fatigue: Benzodiazepines can cause sedation and fatigue by dampening activity in key parts of the central nervous system (CNS).

People who take a benzodiazepine for more than two or three weeks may develop a tolerance to the drug, and over time may need to take increasing doses to achieve the same effect, only worsening their fatigue. Long-term effects also may include muscle weakness.

It’s important to remember that it takes older people up to three times longer than younger people to flush these drugs out of their bodies. The ensuing buildup of the drug in the body puts older people at a much higher risk for experiencing fatigue and for developing physical or psychological dependence.

Alternatives: Talk with your doctor or other health care provider. Many patients with mild anxiety or insomnia don’t need benzodiazepines at all, but stopping or reducing the dosage of a benzodiazepine should always be monitored by a professional, as serious withdrawal effects can occur.

For all the conditions listed above, there are alternative drugs and nondrug treatments. Melatonin, in doses from 3 to 10 mg before bedtime, for instance, sometimes helps to reestablish healthy sleep patterns.

Why they’re prescribed: Antihistamines are used to relieve or prevent the symptoms of allergic disorders (such as hay fever) or the common cold. Some antihistamines are also used to prevent motion sickness, nausea and vomiting, and to treat anxiety or insomnia.

How they can cause fatigue: Antihistamines are CNS depressants. Most list tiredness and drowsiness among the potential side effects; some list weakness.

Older people generally should not use diphenhydramine (Benadryl) — found in any sleep aid with a name ending in “PM” — because of its powerful sedative effects, which dramatically increase the risk of falls and bone fractures.

Fatigue is also a listed side effect of fexofenadine (Allegra), another popular antihistamine, though perhaps less than other such drugs. Older people generally should not use this drug because their renal systems are unable to efficiently clear it, allowing the drug to build up in the body.

Alternatives: Newer-generation antihistamines such as loratadine (Claritin) and cetirizine (Zyrtec) are better tolerated by older patients and present a lower risk for fatigue.

How they can cause fatigue: Fatigue is a common side effect of antidepressant medications, especially during early weeks of treatment. Because antidepressants may also worsen fatigue brought on by another condition, teasing out causes is often difficult.

Researchers have suggested that antidepressants may cause fatigue through their effect on the brain chemicals called neurotransmitters — chiefly serotonin and norepinephrine — and on hormones. Disruptions in the body’s secretion of the stress hormone cortisol, for example, have been closely linked to fatigue symptoms.

Alternatives: Talk with your doctor or other health care provider about adjusting your antidepressant dose (side effects are often dose-related) or whether nondrug therapies might work just as well or better for you than a drug. You might also want to explore switching drugs, especially if you’re older and taking one of the tricyclic antidepressants, which are considered to be potentially inappropriate drugs for older people.

How they can cause fatigue: Antipsychotics are drugs that dull the activity of the central nervous system. In studies, the side effects include fatigue, lethargy and weakness. Many of these drugs also lower dopamine levels, which can lead to drowsiness and sleepiness as well.

Alternatives: Talk with your doctor or other health care provider about the possibility of reducing dosage or switching to another antipsychotic drug. And if you’ve been prescribed an antipsychotic to help you sleep or for some other off-label use, you’d be well-advised to seek out more proven, safer treatments for your symptoms. (For instance, in older patients, especially, these drugs increase the risk of heart failure.)

Why they’re prescribed: Antibiotics are used to treat health conditions caused by bacteria, including ear and skin infections, urinary tract infections, food poisoning, pneumonia, meningitis and other serious illnesses. They’re also used to treat or prevent infections that can complicate surgery or other medical procedures.

How they can cause fatigue: Researchers have long known that some people who take antibiotics experience feelings of tiredness and extreme fatigue, but it’s still not clear exactly why. Read the safety and prescribing information for sulfamethoxazole/trimethroprim (Bactrim DS), for example, and you’ll see unusual tiredness or weakness listed as a potential side effect. Similarly, the package insert for cephalexin (Keflex, Keftabs, Panixine, Biocef, Zartan) lists fatigue as a potential side effect.

Alternatives: I believe, as do many doctors and other health care professionals, that antibiotics are grossly overprescribed. If you have a minor bacterial infection, ask your physician if an antibiotic is really needed and if a natural alternative might do the trick.

How they can cause fatigue: Diuretics can interfere with the balance of electrolytes —including sodium, potassium and chloride — in your body. Electrolyte imbalances can cause serious health problems, including extreme fatigue, muscle weakness and achy joints, bones and muscles (along with many other symptoms not related to fatigue).
Alternatives: Talk with your doctor or other health care provider about cutting back on your use of salt, exercising more and limiting your fluid intake.

Ask the Pharmacist is written by Armon B. Neel Jr., PharmD, CGP, in collaboration with journalist Bill Hogan. They are coauthors of Are Your Prescriptions Killing You?, published by Atria Books.

Information contained in the Ask the Pharmacist column by Armon B. Neel Jr. is intended to help individuals and their families become more informed about medication usage and interactions, and be better health care consumers. Any advice or information provided should not be followed in lieu of a personal consultation with a trained medical professional.