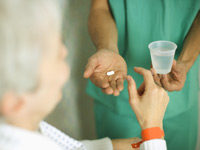 The problem is that the U.S. Food and Drug Administration had approved Megace ES only to treat weight loss associated with AIDS. In fact, the FDA had twice instructed the company to do additional research and clinical trials if it wanted to market the drug for other uses.

Par, however, continued targeting doctors and nursing homes caring for non-AIDs geriatric patients. The company rewarded top-performing sales reps with bonuses such as Rolex watches and vacations to Mexico.

In March, facing a raft of criminal and civil lawsuits over its "off-label" marketing of Megace ES, the company pleaded guilty in federal court to misbranding its product and agreed to pay $45 million in penalties. Par Pharmaceutical had earned $11 million through its "end run" around the FDA, U.S. Attorney Paul Fishman said.

Although no allegations exist that anyone was harmed, the Justice Department says Par was aware of the potential side effects associated with the drug, including "an increased risk of deep-vein thrombosis, toxic reactions in elderly patients with impaired renal function, and mortality."