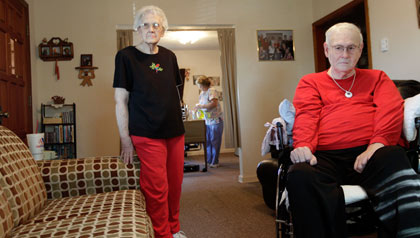 After her husband spent 14 months in a nursing home, Naomi Clark had enough. Paralyzed on his left side from a stroke, Douglas Clark was not getting the care she felt he needed.

"I was there most of the time providing 75 percent of the work," Naomi, 76, said, patting her husband's right foot as he dozed in their Muncie home.

"I asked them why they couldn't do more and was told they didn't have enough help for all the patients. So I told them to get the paperwork started. I was taking him home."

Now, three years later, Clark realizes she could have started home care sooner had she known about other options such as the in-home care from a service that provides an aide for six hours each day.

Next year the Indiana General Assembly will consider a bill that would help people like the Clarks better understand options for long-term care for their loved ones.

The legislation would require hospitals to provide lists and contact information about nearby long-term care choices, including alternatives to nursing homes, when patients are discharged.

A case manager from a local Area Agency on Aging (AAA) would provide similar information during preadmission screening for nursing homes; nursing home personnel would be required to supply the information shortly after a person is admitted.

In addition, patients or their caregivers would be eligible to receive a free assessment, conducted by a case manager from one of Indiana's 16 nonprofit AAA offices, about the patient's ability to live in the "least restrictive environment."

"Making these decisions may be among the hardest Hoosiers will ever face," said Sen. Vaneta Becker, R-Evansville, the bill's author. "This legislation may just prevent some institutionalization of patients who really don't need it."

An AARP Public Policy Institute report (pdf) issued in September found that Indiana ranked 47th out of the 50 states and the District of Columbia for long-term services and supports for older adults and people with disabilities and family caregivers. The analysis also said the average annual cost of care in an Indiana nursing home is $75,600, but, in comparison, it costs $29,640 a year for 30 hours of home health care per week.

"We pay all this money in Medicaid funding to keep people in long-term care facilities when it would be less expensive to keep them at home," said Vickie Beeson, owner of Senior Helpers, a home-care services business in Greenfield.

For years, AARP has advocated shifting Medicaid long-term care funds away from nursing homes and into home- and community-based services, for the cost savings and because most older people say they want to age at home, not in an institution.

A 2010 survey of AARP members in Indiana found that 83 percent would prefer to receive long-term care at home.

Many people do not plan for long-term care until something — such as a fall — forces them to make a choice.

"Often such decisions are made during a crisis, and the family has little time to decide on the kind of care needed after discharge from the hospital," said Paul Chase, AARP Indiana associate director for public policy.

That's what Naomi Clark faced when her husband, now 78, had two strokes in 2007.

Becker's bill was passed by the Senate in the 2011 legislative session but was not considered by the House. She predicted quick action in the 2012 General Assembly.

David Allen is a writer living in Chesterfield, Ind.