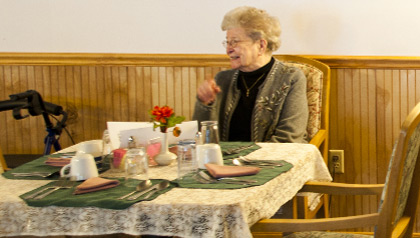 Betty Hanzlick likes the cozy room she occupies at Above and Beyond, a personal care home in Allentown. But as her savings dwindle, she fears she soon won't be able to afford it.

Now, however, new regulations that take effect in January will open more possibilities for Hanzlick and the estimated 49,000 people living in Pennsylvania's personal care homes.

"We've had many reports of people in personal care homes who exhausted their assets and were told they couldn't live there anymore," said Ray Landis, advocacy manager for AARP Pennsylvania.

AARP was active in the almost three-year process of hammering out specific rules with regulators, providers and consumer advocates after the assisted living licensing law passed in 2007.

Until now, low-income residents of personal care homes often moved to nursing homes, where they could get Medicaid assistance, even if they didn't need 24-hour skilled nursing care. "That's bad for the resident and bad for the taxpayer," Landis said. Assisted living costs $30,000 to $40,000 a year — about half the $70,000 to $80,000 cost of nursing home care, he said.

Studies suggest 40 percent of people entering Pennsylvania nursing homes could be cared for in a less restrictive setting.

"One of the most important aspects of licensing [assisted living] is that it will allow people to age in place," said Jennifer Burnett, deputy secretary of the Office of Long-Term Living.

Assisted living residences will be required to offer one or more health services such as skilled nursing, occupational and physical therapy, help with daily activities such as dressing and bathing, hospice care, and services for people with cognitive problems such as Alzheimer's disease. Caregiver staff also must meet new training standards. For example, those caring for residents with dementia must complete at least eight hours of specialized training annually, in addition to the 16 hours of continuing education each year required for all staffers.

Each assisted living unit will be a private apartment with a lockable door, a full bathroom, accommodations for cooking and at least 160 square feet of living space — 225 square feet in new buildings. Residents will have a roommate only if they request one. In contrast, personal care homes are allowed to have shared bathrooms and up to four people per bedroom.

Officials expect about 140 to 210 of Pennsylvania's 1,400 personal care homes will apply for assisted living licenses. In addition, the Office of Long-Term Living reports dozens of inquiries from providers interested in operating new facilities.

"Absent a licensing law, out-of-state providers were very conservative about coming to Pennsylvania even though we have one of the nation's largest populations of older people," said Timothy W. Coughlin, president and CEO of Erie-based LifeServices Assisted Living and public policy chair at the Pennsylvania Assisted Living Association. "Hopefully, more national providers will expand in Pennsylvania."

As for Betty Hanzlick, she's hoping benefits based on her late husband's World War II service will help her stay where she is. If not, she might move to an assisted living facility.

For information about an assisted living facility near you, contact your Area Agency on Aging office.

Richard Laliberte is a freelance writer living in Macungie, Pa.