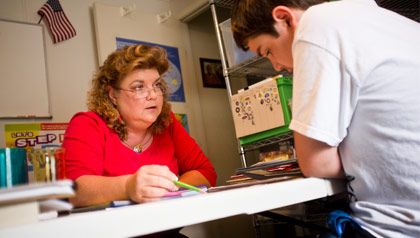 Julie Smith of Greenville contracted four types of infections after surgery in 2001, when her son Jonathan was 2. South Carolina has since enacted legislation and is seeing a reduction in medical errors.

When Julie Smith was admitted to a South Carolina hospital in 2001 for a partial hysterectomy, her focus was on a quick recovery.

Prior to surgery, she found it reassuring that thousands of hysterectomies are performed each year. After surgery, however, it didn't take long for the Reidville woman to discover that hers was anything but a routine procedure.

"I acquired four types of infection because the surgical tools they used were not properly sterilized," Smith, 48, said. "Now my quality of life is probably 30 percent of what it used to be. The error made at that hospital took our livelihood away."

The hospital never acknowledged it made an error, but Smith, who has been unable to work since the operation, said she was informed of it by a doctor unrelated to the case. She considered but rejected suing the hospital.

She was still on medical leave when she was laid off from her part-time job with a computer software company. She said she is unable to work now because she's "too much of a liability" and because of health issues associated with the infection, including the fact that her abdominal wall was removed. She described herself as a very active person before the infection, caring for her 2-year-old son and working part-time.

Now simple tasks "like going to the grocery store" are problematic. Smith's life today is one of constant corrective procedures, limited physical abilities, ongoing medication and mounting medical bills. Her story is just one among the tens of thousands nationwide annually involving injuries and deaths due to medical error — an issue that public and private groups in South Carolina are trying to address.

Advocates say patient safety has improved with the passage of state laws and the implementation of education and hospital safety initiatives. These steps have helped to drastically reduce the number of hospital infections, foster better communication between hospitals and patients, and raise the level of accountability for hospitals and their staff, said Teresa Arnold, legislative director for AARP South Carolina.

"We can improve patient safety with everyone working together and making this a priority," she said.

In 2005, passage of the Lewis Blackman Hospital Patient Safety Act, named for a 15-year-old Columbia boy who bled to death in 2000 after undergoing elective surgery, mandated that patients be given information on how they can contact a doctor or quickly send for help.

"I think we have made huge progress in attitudes," said Helen Haskell, the mother of Lewis Blackman and founder of Mothers Against Medical Error. "And we have a lot of allies inside the health care industry."

"We have all of our facilities reporting to us, and we validate our data," said Kathleen Antonetti, M.D., of the state Department of Health and Environmental Control (DHEC).

Ahead of other states

A recent report by the federal Centers for Disease Control and Prevention showed South Carolina was the only state among 17 reporting to document a significant reduction in one type of hospital-acquired blood infection, which decreased by 30 percent between the first and second halves of 2009.

"We are ahead of most states," Antonetti said.

But recent state budget cuts have limited the amount of infection-related data the state tracks and postponed DHEC plans to begin monitoring the use of antibiotics for infections and infection rates in nursing homes and other facilities.

"We have a lot more to do to empower patients," AARP's Arnold said.

Also of interest: How to avoid dangerous medication errors. >>

Katrina Goggins is a writer living in Columbia, S.C.