Asking the right questions just might save your life. It's a message that can’t be repeated often enough. Study after study has shown that good communication and patient safety are inexorably linked. When communication with health care providers fails, patients are less likely to follow medication instructions, are subjected to more diagnostic tests and are more likely to have to return to the doctor's office, the hospital or the emergency room. And billions of dollars are added every year to the nation's health care costs.

Asking your doctor the right questions might save your life. — Photo by Siri Stafford/Getty Images 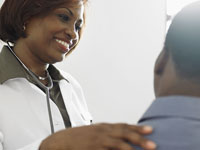 Need more information on how to manage your health? Use these below tools to get started.

A 2007 report from The Joint Commission, which accredits U.S. health facilities, cited a "breakdown in communication" as the root cause of more than 3,000 unexpected deaths and catastrophic injuries reported to the commission since it started tracking such occurrences in 1985.

"I've seen numerous cases of medical errors and discovered after the fact that the patient or family member knew something was wrong and didn't speak up," says David Shulkin, M.D., professor of medicine at Albert Einstein College of Medicine in New York and editor of Questions Patients Need to Ask: Essential Information Every Patient Needs to Know (XLibris, 2008).

Shulkin tells the story of a woman who was given the wrong ID bracelet upon checking into the hospital and spent an entire day having tests she didn't need. "It seems ridiculous," he says, "but she thought it was her doctor's name, so every time that name was called, she responded. Ask what tests you've been scheduled for, and ask if the test you're about to be given is really for you," he says. "Simple proactive questioning can prevent a lot of problems."

Silence can be hazardous to your health

Experts agree that the responsibility for effective communication lies partly with the patient. "Patients need to see themselves as the center of their health care team," says Cathy Ipema-Brown, spokesperson for The Joint Commission. "They can't be bystanders."

But too often patients remain silent. One reason is fear of rocking the boat. Another is that patients can literally die because of embarrassment, says Vicki Rackner, M.D., a former surgeon who now facilitates patient-doctor communication through her company, Medical Bridges, in Seattle. "I once had a patient who couldn't tell her doctor about blood in her stool," Rackner says. "When she was finally evaluated for abdominal pain, her colon cancer had advanced and ultimately took her life. It probably would have been treatable if she had mentioned it sooner."

When patients are unengaged bystanders, their health suffers as a result. A recent survey from the AARP Public Policy Institute on the care of chronic diseases makes this clear. Of those who were less engaged, 36 percent experienced more medical errors — compared with 19 percent of those who were highly engaged.

Will Carpenter, a 57-year-old retired ship captain from Cookeville, Tenn., was determined to handle his surgery for renal cell carcinoma with the toughness he learned in 33 years in the U.S. Merchant Marine. When he met with the doctor, Carpenter didn't start with, "Am I going to die?" but he brought up more immediate concerns. "Not only did I ask the doctor if she had washed her hands, I also questioned her about the education, training and talent of the colleagues who would be assisting her," he says.

Many patients find it hard to speak up if doctors seem dismissive or unresponsive, even if they appear to be open to communication.

Medical Bridges' Rackner says many people were brought up on "old medical manners" — that is, to be "good" patients. "Being polite was more important in the doctor's office than in church," she says. Shulkin thinks that mindset is changing. "The days of 'doctor knows best' are waning, and the relationship is more about interaction," he says.

Next: How to ask good questions. >>

Communication is a two-way street

While patients need to express concerns and ask questions, doctors need to practice what Moira Stewart, M.D., director of the Center for Studies in Family Medicine at the University of Western Ontario, refers to as "patient-centered communication" — that is, pay attention not only to the condition but also to the patient's experience of the condition. Her research shows that when this type of exchange takes place, the patient has fewer diagnostic tests and referrals, and improved health.

A "cascade of consequences" occurs when communication breaks down, Stewart says. For one thing, recovery is slower. "Patients with an acute condition should get better in six weeks — but they don't," she says. They are less likely to follow their medication instructions and are more likely to undergo unnecessary tests and to be readmitted to the hospital.

Readmissions are hard on the patient, but they also inflate the financial burden on the health care system. A study in the New England Journal of Medicine found that one in five Medicare patients is readmitted to the hospital within a month of discharge. The reason: They are not told clearly how to take care of themselves at home. Researchers estimated that the cost of these unplanned return visits was $17.4 billion in 2004.

In another study published last July in the Annals of Emergency Medicine, Kirsten Engel, M.D., an emergency medicine physician at Northwestern University's Feinberg School of Medicine, and her colleagues looked at patients' understanding in four areas: diagnosis, treatment in the ER, instructions for at-home care, and hospital discharge instructions. "We found that 78 percent of the 140 patients questioned did not understand instructions for their care after leaving the emergency room," Engel says.

"Having a meaningful conversation with a health care provider is a skill that needs to be developed." — Nancy Whitelaw, director of the Center for Healthy Aging at the National Council on Aging

Further, Engel says, "Only 20 percent recognized that they had difficulties understanding information given to them." So if a patient doesn't know what he or she doesn't know, where do we go from here?

"Having a meaningful conversation with a health care provider is a skill that needs to be developed," says Nancy Whitelaw, director of the Center for Healthy Aging at the National Council on Aging. "There are accessible, convenient community-based programs that give people the confidence to have conversations with their providers."

Developing that skill may mean the difference between life and death. "We learn it's not polite to argue," says retired ship captain Carpenter. "But you have to take charge of your own health. You pay a price for passivity."

How to Ask Good Questions

At the doctor’s office:

Experts suggest that patients go to an appointment with a set of questions or perhaps even an e-mail, or fax the doctor ahead of time. "If you have a lot of questions, call the office to say that you may need a little more time," says Gloria Lopez-Cordle, author of The Personal Medical Journal.

Questions to ask about meds:

Next: How to be your own advocate. >>

Talking With Your Doctor: Information from the National Institutes of Health about communicating with medical providers. Go

Be your own advocate in the hospital:

You may also like: How to choose the right hospital. >>

Sources: U.S. Agency for Healthcare Research and Quality and The Joint Commission