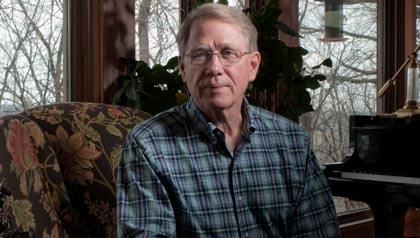 Kent Wilson of St. Paul is the medical director of 'Honoring Choices Minnesota,' which trains facilitators to help families discuss end-of-life decisions. AARP is helping to promote the program.

At 65, Kenneth "Red" Wilson began exhibiting signs of early dementia after he retired from a career as coach of the frequently top-ranked football team at Bemidji High School. His mental decline was swift before he died of cancer eight years later in 1980.

See also: Beginning the Conversation About End of Life.

"My sister and I were no longer at home, and so it fell to our mother to deal with Dad's day-to-day difficulties," said retired St. Paul surgeon Kent Wilson, 69. "By the time we needed to have a family discussion about end-of-life decisions, he was significantly demented and couldn't participate in the process."

Three decades after Red Wilson's death, efforts to encourage families to have "the conversation" are a major part of his son's retirement life. Now medical director for Honoring Choices Minnesota, he is spearheading an effort to ensure that — before a health crisis — patients, loved ones and health providers are clear about end-of-life decisions. A standardized advance health care directive can be downloaded.

AARP Minnesota and Twin Cities Public Television are joining other organizations in a campaign to take the program outside the walls of hospitals.

"We want to educate people that it's OK to think about these things and have conversations with their families," said Michele Kimball, AARP Minnesota state director. The organization will host tele-town halls for AARP members and will alert them to televised specials. In addition, AARP Minnesota will distribute Honoring Choices MN material at the state fair and other events.

More than 500 people, some of them with nonmedical backgrounds, have taken a 14-hour training course to become planning facilitators.

The facilitators are what sets Honoring Choices MN apart from other programs that make living wills available, said Kenneth Kephart, a geriatrician who heads senior services for Fairview Health Services in the Twin Cities.

"They can be anyone who has completed the standardized training, ranging from a nurse to members of the faith community," he said. All the facilitators receive the same training "and have a script to follow to get the discussion started."

More than 80 percent of the primary care physicians in the Twin Cities are affiliated with a large health care system, and all of those systems participate at some level in Honoring Choices MN. The next goal, Wilson said, is to expand the program to churches and social service organizations. Meanwhile, families interested in having the conversation led by a facilitator should talk to their primary care doctor.

Hubert "Skip" Humphrey, 68, a past president of AARP Minnesota and a member of AARP's national board, said his interest in helping families discuss end-of-life decisions is rooted in personal experience. His father, former Vice President Hubert H. Humphrey, was one of Minnesota's first in-home hospice patients before his death in 1978.

"Dad said, 'I want to die looking out on the lake at Waverly,' and that's how he passed away."

Humphrey said that experience prompted the family to discuss end-of-life plans with his mother, Muriel. "It helped us understand how she wanted to be treated" when she was dying in 1998.

Sean Kershaw, who heads the St. Paul-based Citizens League, a nonpartisan group that focuses on public policy, said medical directives have been in use for more than 25 years, "and the laws about patient rights are, for the most part, in place. What's missing is the social element."

To encourage public awareness, Twin Cities Public Television is planning to air at least eight documentaries or special programs during the next two years, in addition to creating an online tool kit for families. To see it, go to tpt.org and search for "Honoring Choices MN."

David Hawley is a writer living in Edina, Minn.