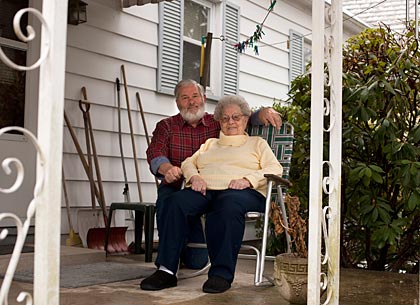 Cliff Eckhardt, 71, visits his mother, Hyacinth Eckhardt, 90, at her home in Lopatcong. An aide provided by the state helps her with bathing and cooking. New Jersey has been slow in expanding home- and community-based services.

En español | Hyacinth Eckhardt has lived in her cozy house in Lopatcong Township for 60 of her 90 years. Over time, much has changed — she's widowed and needs a walker. But home is still home, thanks to a state program that provides services to help people remain in their homes when they need help with simple tasks like bathing and cooking, rather than move to a nursing home.

"I have wonderful people who help but still let me be independent. I couldn't do it without them," said Eckhardt, whose limited income makes her eligible for Medicaid, the state and federal medical assistance program.

Her son, Cliff, 71, an attentive and frequent visitor who lives 28 miles away, agreed. "Years ago, she'd have been in a nursing home, for sure," he said.

Hyacinth Eckhardt's experience should be the norm in New Jersey, but it's not — yet.

In 2006, New Jersey set out to end its reliance on nursing homes for Medicaid beneficiaries by passing the Independence, Dignity and Choice in Long-Term Care Act (PDF). The law noted that many people were admitted to nursing homes for lack of other options, and made it public policy to promote and expand home- and community-based solutions. It ordered a batch of administrative changes, including creation of one-stop, county-based referral centers that guide all callers seeking help with long-term care, and determine who may be eligible for Medicaid.

Families welcomed the change. But the pace of reform has been glacial, many advocates say.

"The state has taken some good steps, but implementation has been very slow," said Doug Johnston, governmental affairs manager for AARP New Jersey, which lobbied for the law.

So far, referral centers operate in only four of New Jersey's 21 counties: Atlantic, Bergen, Gloucester and Warren, where Eckhardt lives. State Sen. Loretta Weinberg, D-Bergen, a key sponsor of the 2006 law, said the center in her district opened in November 2010 — a year later than state officials promised — only after "my constant nagging." She blamed "state bureaucratic inertia" for the delay.

Meanwhile, nursing homes still receive most of the $2.6 billion in Medicaid money devoted to long-term care. From 2007 to 2009, the portion spent on nursing homes declined only one percentage point, to 72 percent. Advocates of home-based care say the reform could yield huge savings: The average nursing home costs $64,000 a year per resident, versus roughly $17,100 for community-based care.

Next: Effort has fallen short of its goal. >>

Even New Jersey's top health official has acknowledged the effort has fallen short of its goal. "Other states, such as Minnesota, Oregon and Washington, currently spend more than half their long-term care dollars on community care," Department of Health and Senior Services Commissioner Poonam Alaigh wrote last year. "While New Jersey has made some progress, I am fully aware that much work lies before us."

Assistant Commissioner Patricia Polansky promised that six more counties will have referral centers by July 1, with the remainder to open by Jan. 1, 2012. She called the reform a "huge, heavy lift."

"We're changing the philosophy and approach of the aging services network and the infrastructure," she said.

Nursing homes will always serve some physically or cognitively disabled adults, she said. But others with fewer needs can remain at home when given a care manager to arrange services such as day care, visiting nurses and personal assistants. Medicaid also pays for home modifications, such as ramps, railings and grab bars.

Hyacinth Eckhardt has help from family and vigilant neighbors. Transportation to doctors and management of medicines are provided by her son. But it's the added support that allows her to stay put: homemaker services, Meals on Wheels, minor home modifications and a personal emergency response system.

"We let her handle as much of her own affairs as she can," he said.

Mary Jo Patterson is a freelance writer based in New Jersey.