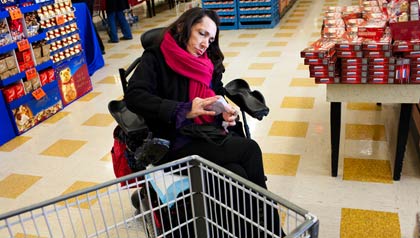 Donna Gibbs, 54, spent years in a nursing home before she discovered her Medicaid benefits could pay for home-based care to deal with her paralysis, which would allow her to live independently.

Donna Gibbs was sent to a nursing home after complications from gastric bypass surgery caused paralysis. Eventually, she was placed on an Alzheimer's ward.

"I was living with death," said Gibbs, 54, of Middleton. "People were dying around me every day."

Gibbs lived at the nursing home for more than three years, unaware Medicaid could pay for home-based care for her to live independently. Once a friend mentioned that option, she chose it. It took more than a year to make the arrangements to move her to a condominium with in-home help 63 hours a week.

Now, Gibbs said, she's thrilled to be living independently, relishing such simple pleasures as choosing her own food and schedule.

Many disabled and older Massachusetts residents find it difficult to get Medicaid to help pay for the services they need to live on their own. Their struggles are worse than those of residents in most of the country, according to a scorecard compiled by the AARP Public Policy Institute, the Commonwealth Fund and the SCAN Foundation.

In the national survey, Massachusetts ranked 40th among the states and the District of Columbia last year for the percentage of Medicaid beneficiaries first receiving long-term care services in a home- or community-based setting, rather than in an institution. It ranked 30th for overall affordability and quality of long-term services and supports. The survey evaluated 25 different measures such as home care, assisted living and nursing home facilities.

"This is very disturbing," said Al Norman, executive director of Mass Home Care, which advocates for community care. "Hundreds of people referred to nursing homes don't have to be there."

Ten percent of the state's nursing home residents could manage at home if necessary services were provided, the scorecard showed.

Gov. Deval Patrick, D, pledged in 2008 that his administration would help ensure that older and disabled residents could live independently, which most people want. But Norman said the administration has not done nearly enough. Only 31 percent of people needing long-term support are first given the option of in-home care, he said. "Putting people in nursing homes as a first choice has to change."

Next: A piece of health care left behind. >>

Part of the problem is that the state devotes nearly two-thirds of its Medicaid long-term care budget to institutional care rather than community-based care, which is less expensive. In Massachusetts, Medicaid pays roughly $60,000 a year for a skilled nursing home and $45,000 for a group home, while in-home care costs about $37,000 for 30 hours of care a week.

AARP Massachusetts wants lawmakers to include long-term care when they consider a landmark health care reform financing bill this year and shift more money to home- and community-based care.

The state prides itself on being a leader in health care reform, said Deborah Banda, AARP Massachusetts state director, but it has lagged behind in offering Medicaid recipients the option of home-based care.

"We need to pay more attention to long-term services and supports," Banda said. She considers such services to be critical in the continuum of health care. "This is a piece we [as a state] have left behind."

Nursing home administrators say they and state officials are making progress getting people back into their homes as quickly as possible. Nearly two-thirds of people who enter nursing homes today will stay there for less than a month, said Scott Plumb, senior vice president of the Massachusetts Senior Care Association, which represents nursing homes.

People who stay long term in nursing homes these days are either extremely disabled or have advanced dementia, he said.

For long-term care and other legislative updates, go to the AARP Massachusetts website.

Call to Action: Volunteer as an e-advocate to help AARP fight to improve long-term care in Massachusetts. Email ma@aarp.org for information.

Rochelle Sharpe is a Pulitzer Prize-winning freelance writer based in Brookline, Mass.