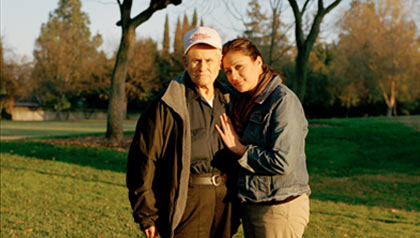 Pedro Medina, 88, has a POLST order that details his care choices. Medina, who had been hospitalized with cancer, wanted to go home to be with family members, including granddaughter Maria Simmons.

En español | "Where is my pink paper?" Pedro Medina demanded as he was wheeled toward the exit of the nursing home in Davis.

He was desperate to ensure that the bright pink medical form, signed by his doctor, was with him. A nurse quickly produced the pink document. It was Medina's assurance of a peaceful death.

Suffering bone cancer that was expected to take his life within weeks, the retired farm worker — with the help of his family — had expressed his end-of-life wishes in a document known as Physician Orders for Life-Sustaining Treatment (POLST). The orders meant no more hospitalization for him and certainly no medical heroics to save his life, just palliative care to keep him comfortable.

The next day, it was safely tucked into Medina's carry-on when his sons took him to his native Mexico where he wanted to spend his remaining days. Now, three years later, Medina, 88, has surprised his eight children and three dozen grandchildren by rebounding and returning to Yolo County. But that pink form remains with him — always.

Thanks to growing awareness of POLST, Medina's story is becoming a familiar one.

Three years ago, a California law took effect requiring that POLST forms voluntarily signed by patients and physicians be honored in all care settings. The law also gave immunity to providers who honor a POLST document.

Eight in 10 California nursing homes have obtained a completed POLST form from at least one resident. Two-thirds have admitted at least one person who already had a POLST, said Judy Citko, executive director of the privately funded Coalition for Compassionate Care of California (CCCC).

POLST forms allow doctors to help people with serious or progressive illnesses to specify the extent of life-sustaining measures they are willing to accept when facing death, using standard medical terms on a form that health care professionals must honor. These carry more weight within the medical community than a living will, which expresses a person's desires for care but is not a medical order.

California is one of 14 states with standardized POLST forms endorsed by the National POLST Paradigm Task Force; many more states are developing their own forms.

Next: A "quality conversation" between doctor, patient. >>

With 25 local coalitions across the state, CCCC has trained more than 500 people in the use of POLST. Those trainers in turn educate medical practitioners about how to engage in POLST discussions with patients. The coalition hopes to ensure a "quality conversation" between doctors and patients about the form, Citko said.

Numerous organizations are represented on the coalition's California task force, including AARP, which supports POLST efforts across the country and will help sponsor the first national POLST conference for health professionals and advocates, set for February 2012 in San Diego. The conference will include representatives from all the states that have POLST or are developing it. They will discuss implementation of POLST, training, outreach and ongoing challenges.

"We want to be sure that people have as much control as possible over the care they receive and that their wishes and preferences are honored," said Naomi Karp, former senior strategic policy adviser for the AARP Public Policy Institute. "We want to enhance the communication between people and their health care providers so they can make informed choices."

Research in Oregon has shown that where patients have a POLST, the instructions are followed by medical providers more than 90 percent of the time, Karp said.

Task force member James Mittelberger, M.D., a geriatric specialist and national medical director for Evercare Hospice and Palliative Care, recalled one of his patients, an 84-year-old Oakland man. He had suffered repeated strokes, was barely able to swallow or communicate and had been hospitalized on a ventilator. He was miserable. Mittelberger gathered close family members in the patient's nursing home room.

"We had the conversation. He wanted to go home and be able to stay in his home. He didn't want to keep bouncing through the system."

The POLST ordered at-home comfort care, no tubes or extraordinary measures. When pneumonia struck three months later, the man died peacefully at home. He got the ending he chose. "This is how it should be," his daughter told Mittelberger.

For more information, visit the Coalition for Compassionate Care of California website.

Rita Beamish is a journalist and author living in San Mateo, Calif.

Also of interest: Questions for caregivers to ask the doctor. >>