For years, psychiatrist Huberto Merayo prescribed powerful drugs to thousands of patients at his Coral Gables, Fla., practice. In 2009 alone, he doled out more than 7,500 prescriptions to some 1,600 patients. And that cost taxpayers big-time.

That year, Medicaid paid more than $1.9 million to fill scripts for antipsychotics written by Merayo. Over the last three years, he was earning more than $100,000 in consulting and speaking fees from makers of the drugs he was prescribing, according to a database maintained by the news organization ProPublica. 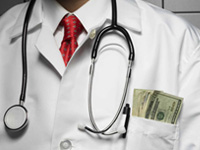 Unscrupulous doctors pocket money from excessive drug prescriptions and leave taxpayers on the hook for the bill.

But there's little evidence that all those prescriptions were needed. A review conducted by Florida health officials last year found cases where Merayo failed to document the reasons he prescribed drugs to patients and indicated that "90% of all recipients interviewed could not produce their antipsychotic medications." The state terminated Merayo's Medicaid license in June 2011.

The situation is not unique, and it has legislators concerned. Sen. Charles Grassley, R-Iowa, is considering "legislative proposals that would address the inappropriate and excessive administration of these dangerous [mental health] drugs," says spokeswoman Jill Kozeny.

Meanwhile, Florida officials caution that large volume does not always suggest a problem. "Although a provider's number of prescriptions may be higher than other Medicaid prescribers, that does not necessarily mean there is anything improper regarding their prescribing," says Shelisha Coleman, a spokeswoman for the Florida Medicaid program.