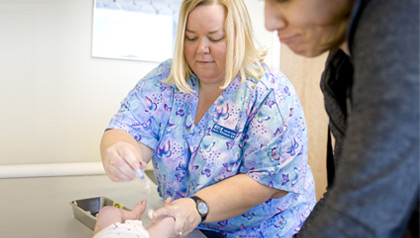 Dawn Quimby Whitmore, who graduated with a nursing degree from George Mason University with the help of an AARP scholarship, worked in a pediatric practice before recently accepting a job in geriatric nursing.

For many people, a job is a way to pay the bills. Nurses tend to see work differently.

"I definitely have a calling," said Dawn Quimby Whitmore of Fairfax, who graduated from George Mason University last spring and joined the ranks of Virginia's 91,000 registered nurses.

Whitmore, 39, decided to become a geriatric nurse after caring for her octogenarian great-uncle for nearly five years. She drove him to the grocery store and medical appointments and helped take care of his house. Two months before his death at 90, he moved to a nursing home, and Whitmore found her mission in life.

"I ultimately want to work in hospice care," she said.

AARP's Dulles chapter is helping people like Whitmore move closer to their dreams — and in doing so is easing the serious nursing shortage in Virginia. The chapter sponsors a classic car show in Herndon each fall to raise money for scholarships for George Mason nursing students who plan careers in geriatrics.

"It's good to do something for the younger folks who are helping older Americans," said Brent J. DeRobertis, vice president of the Dulles chapter, which has given $16,000 in scholarships since 2007.

Whitmore received one of two $2,250 grants last year. She recently landed a position in geriatric nursing.

Virginia has fewer nurses than most states, 624 per 100,000 residents. The national average is 746. The federal Health Resources and Services Administration said Virginia fell from 40th to 45th among states in nurses per capita from 2004 to 2008. The shortage will worsen as the population ages — 16 percent of Virginians are projected to be 65 or older in 2028. And the new health care law could bring up to 1 million more people into the medical system.

Nurses are aging as well. The average age of registered nurses in Virginia is 47. By 2014, half of Virginia RNs will be 65 or older.

Experts are looking at a range of solutions, from recruiting to giving nurses more responsibility on the job. AARP's lobbyist in Richmond, David DeBiasi, is a licensed nurse. Although the percentage of men in the nursing field has doubled nationwide, it's still only about 6 percent, DeBiasi said.

"Men are a huge, untapped market for developing more nurses," he said.

AARP, the AARP Foundation and the Robert Wood Johnson Foundation created the Center to Champion Nursing in America, which is working with states to alleviate the shortage.

Experts agree the nursing shortage is complicated. It's not that fewer people want to become nurses. Nursing is a hot field, and nursing schools around the country turn away qualified applicants. The problem is exacerbated by a shortage of nursing faculty and clinical facilities. Plus, faculty members are also aging.

"Many nursing schools are limited because we lack faculty and clinical space," said Robin E. Remsburg, director of the George Mason School of Nursing, which has five faculty vacancies now. "You can squeeze a balloon at one end and at the other end, but you still have a one-size balloon."

Virginia has raised its nursing school capacity by 900 over five years to about 3,228 RN graduates annually. It has also raised nursing faculty salaries by 10 percent and maintained scholarship funding despite budget cuts.

For now, the recession is keeping nurses who want to retire on the job and sending others who had left the profession back to work.

But, Motley warned, "when the economy improves, and you know it will, the exodus will be more fast and furious than any of us can predict."