Toyota unveiled its ambitions for high-tech health care Tuesday, displaying experimental robots that the auto giant says can lift disabled patients from their hospital beds or help them walk.

The company aims to commercialize products such as its "independent walk assist" device sometime after 2013 — seeking to position itself in an industry with great potential in Japan, one of the world's most rapidly aging nations. 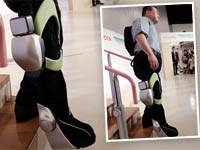 Eiichi Saitoh, a professor in rehabilitation medicine, demonstrated the "walk assist" device on Tuesday, strapping the computerized metallic brace onto his right leg, which was paralyzed by polio.

He showed reporters at a Toyota facility in Tokyo how the brace could bend at the knee as needed, allowing him to walk more naturally and rise from a chair with greater ease than the walker he now uses. Wearing a backpack-like battery, Saitoh walked up and down a flight of stairs, smiling with delight.

Saitoh said he had tried Toyota's machines with patients and was confident they helped people recover more quickly from strokes and other ailments that curtailed movement.

"It may be difficult to predict the future, but the era of an aging society is definitely coming," he said. "We need partner robots to enrich our lives."

Toyota also demonstrated an intelligent machine with padded arms that can help health care workers lift disabled patients from their beds and then carry them around. Another mobility aid worked like a skateboard to help people relearn balance.

Toyota officials said technology for autos such as sensors, motors and computer software are being used in such computerized gadgets to help people get around, and what they learn about mobility for people will likely be of use in future cars.

Prices and overseas sales plans of all the machines are still undecided, according to Toyota.

General Manager Akifumi Tamaoki said more tests were needed on more people to insure safety and reliability, and gain user feedback, but the commercial products in the works were going to be smaller and lighter than the prototype versions shown.

"We define gentle and smart machines as partner robots," he said.

Toyota has previously shown human-shaped robots that played the trumpet and violin, and those that move around and talk about Toyota cars at showrooms.

Rival Japanese automaker Honda Motor Co. has developed a sophisticated humanoid robot called Asimo, which can run, talk and dance. But Asimo has been limited to showrooms and labs and has yet to enter any hospital or home.

Next: Other manufacturers get in the health care business.>>

Toyota faces competition from other manufacturers that are all working on gadgets to tap into the health care business. Honda also has demonstrated machines worn on the legs that help people move, as have some universities.

Hirohisa Hirukawa, a robot exert at the government-backed National Institute of Advanced Industrial Science and Technology, said more time would be needed to see the full busineses potential of the Toyota machines but was upbeat.

"I feel that the walk-assist device has real potential to sell to consumers," he said in an email.

Tamaoki said Toyota is keeping its offerings simple, compared to those from Honda, so they can enter everyday life easily.