AARP survey reveals that many women face biases, putting them at risk for mental health issues 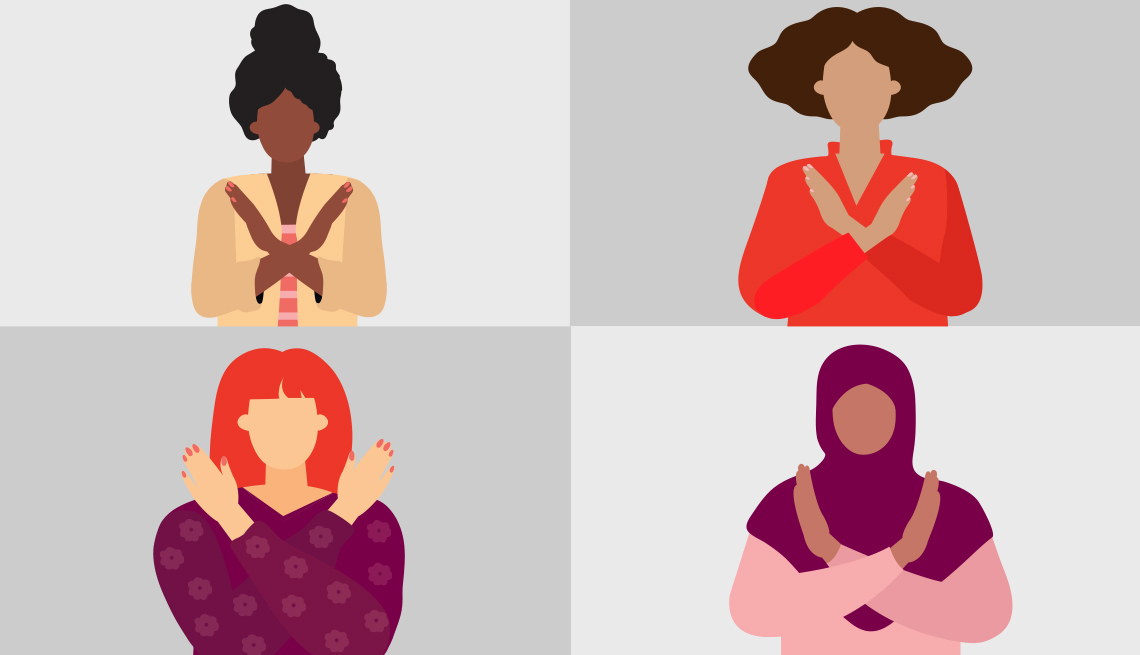 Nearly 2 out of 3 women age 50 and older say they are regularly discriminated against, and those experiences appear to be taking a toll on their mental health, according to the latest "Mirror/Mirror" survey from AARP.

The poll of 6,643 women paints a disheartening picture of discrimination affecting women of all ages, ethnicities and races, with significant implications for their health and longevity.

Ageism was the most frequently reported type of discrimination among women 50 and older who experience discrimination regularly, with 48 percent reporting bias based on their age, according to the poll. Discrimination based on ethnicity/race/skin tone, weight, gender and social class was also widely reported.

“Surveys like this one are important because they show how common this is and that more has to be done,” says Yvette Peña, AARP vice ﻿president of Hispanic/Latino ﻿audience ﻿strategy in the Office of Diversity, Equity and Inclusion. “Women should not have to adapt their behavior to this discrimination against them.”

In the AARP survey, those who said they regularly experience discrimination rate their current mental health lower, on average, than those who do not.

Although age discrimination has been illegal since 1967, the AARP survey indicates that it remains a problem for many older workers. About 30 percent of women 50-plus say they are discriminated against because of their age.

Ageism can take many forms, including incorrect assumptions about the abilities of older workers, social group segregation, coded comments and fewer opportunities for training or promotion.

One 58-year-old director at a technology company, who did not want to be named, said that after she was laid off a few years ago, she learned that a former colleague she considered a friend told others the layoffs were necessary because the company wanted a younger team. “It was hurtful that she looked at me that way, because I really liked her,” the woman said.

Even at her current company, the director said, she has faced biased remarks because of her age. One time, when she spoke up with an idea, a younger worker said, “That’s so old-school.”

“I work in technology, so it’s a lot of younger people,” the woman said. “I try to keep up. I try to dress like everyone else, and I don’t like to wear my glasses at work, even though I have much better vision with my glasses, compared to my contacts. I don’t want to be viewed as older.”

Women experience the bulk of age discrimination in the workplace, and ageism tends to be one of the most socially accepted types of discrimination, says Tetyana Shippee, a social gerontologist at the University of Minnesota School of Public Health.

Although hiring managers and employees have been drilled on the inappropriateness of racial bias, negative age stereotypes and ageist attitudes remain common, she observes. “I have witnessed it myself,” Shippee says. “Younger people assume I don’t know how to use technology. And even though age is not supposed to be discussed in hiring, I hear people say they don’t want someone who is too old because ‘we still want them to be vibrant and engaging.’ Across different spheres, I’ve also heard comments about wanting people who are going to ‘stay involved for a long time.’ ”

Research shows that stereotypes about older workers are wrong. Job performance generally improves with age, and older people are highly rated for their loyalty, reliability, leadership and organizational skills, and problem-solving abilities.

“Older workers have a lot to offer, but there is a lack of awareness,” Peña says. “What the world doesn’t realize is that age discrimination is costly not only for the person and their family but for the whole economy. People are living longer, and so many skills are being overlooked.”

Interestingly, the AARP survey reveals that it is not just older women who report age discrimination. Women under 50 were as likely to report being discriminated against because of their age, according to the poll.

Shippee says her own research has produced similar results, revealing a U-shaped curve when it comes to age discrimination of women: “From ages 18 to 30, women report age discrimination due to being too young. From your mid-30s to your mid-40s is a safe time. Then age discrimination starts to pick up again after age 50﻿, and it’s especially high after 55-plus.”

Among working women who experience discrimination regularly, a whopping 88 percent (and 81 percent of those 50-plus) have felt pressured to look or act a certain way at work.

Much of the pressure that women feel is related to the need to look younger, says Yale psychologist Becca Levy, an antiaging researcher and author of Breaking the Age Code: How Your Beliefs About Aging Determine How Long and Well You Live. She notes that part of the blame lies with the beauty industry, which bombards women with ads for antiaging products, and part is due to a society that prizes youth.

“In Japan they celebrate aging, rather than thinking of it as something to fear,” Levy says. About 40 percent of respondents in the AARP survey said they feel pressure from social media to do cosmetic procedures such as dermal fillers and Botox, including 1 in 5 who said they feel “a great deal” or “a lot” of pressure to take such steps. Nearly half reported feeling pressure to dye their hair to cover the gray.

More than half of those polled (5﻿﻿7 percent) reported at least some pressure to use makeup. But the physical-appearance change that generates the most pressure is weight loss, with 68 percent of women saying they feel pressure to shed pounds. 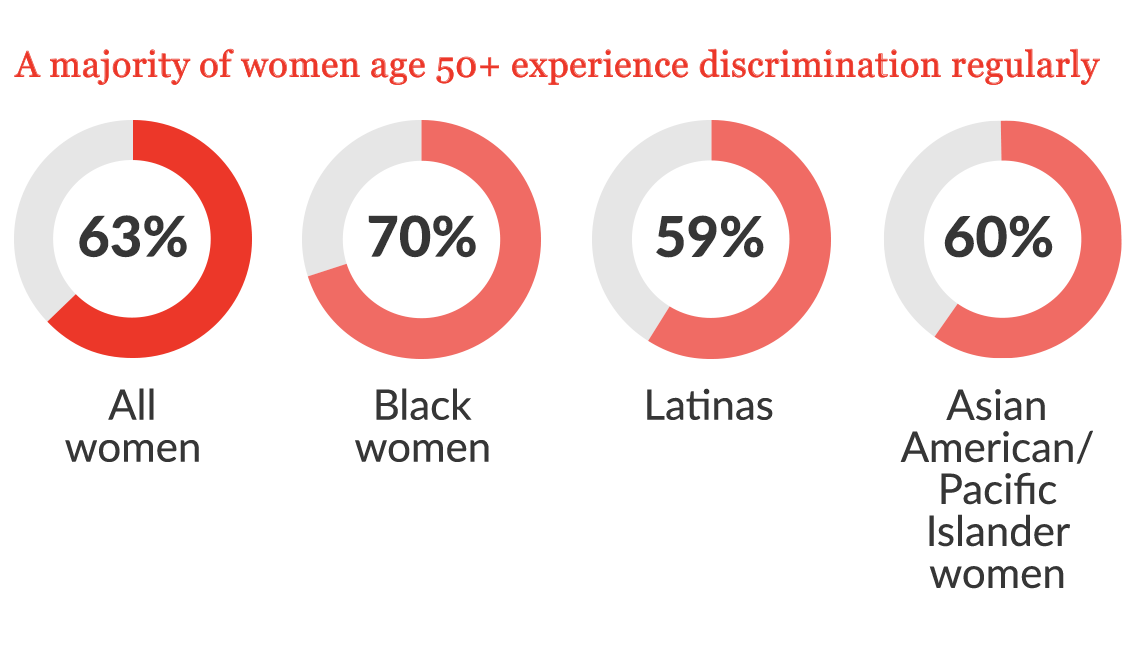 Minority women face the most bias

Gilbert Gee, a professor in the Fielding School of Public Health at UCLA, says other studies confirm that people of color in the United States are subject to the highest levels of discrimination. While outright bias is less accepted than it once was, Gee notes that more mundane microaggressions can still take a devastating toll.

Percentage of women age 18 and older who say they feel pressure from social media to conform to the following beauty norms:

“Things that people encounter on a day-to-day basis — people making assumptions about you, being treated less courteously or being followed in a store — all of those things are very stressful,” he says. “They take a toll on self-esteem and self-concept.”

Patricia Malone, 59, of Jeffersonville, Indiana, has rarely been subjected to overtly racist comments, but she says she often feels like she is being judged because she is a Black woman.

In a previous job as a social worker, she believed there were people who didn’t like her because she was an African American woman who spoke up for herself. And when she moved into a mostly white neighborhood, comments from some of her neighbors made her feel unwelcome.

“I like to think I can read people,” Malone says. “The way they talked to me, asking, ‘What kind of work do you do, exactly?’ It just made me feel like they didn’t think I should be here.”

Discrimination is linked to a number of psychological problems. A study published in the journal Pediatrics in ﻿November 2021, for example, found that adults who faced discrimination frequently were about 25 percent more likely to be diagnosed with a mental disorder and twice as likely to develop severe psychological distress than those who didn’t experience discrimination or did so less often.

Shippee says that discrimination of all types creates chronic stress that can affect your mental health in very direct ways. Even the anticipation of discrimination causes stress and may prompt people to avoid situations where they expect to be treated poorly, possibly forcing them to miss out on opportunities.

“Over time, it impacts your feeling of self-worth,” Shippee says. “We know when people’s perception of self-worth decreases they are less likely to try new things, to feel like they are achieving and meeting their goals. It’s a very serious threat to one’s overall life satisfaction.”

Arlean Cortes, 57, of Pomona, California, says she faced bias in her personal life and in her career as a medical assistant because of her Hispanic ethnicity and her sexual preference (she’s a lesbian). More recently, she has started to worry about age discrimination.

“It makes you do a whole lot more second-guessing,” she says. “It messes with your mental health.”

Discrimination has also been linked to physical problems, including hypertension, heart disease and chronic illness. What’s more, it may shorten your life span.

In a pivotal study on the impact of ageism, Levy and coauthors found that median survival was seven and a half years shorter for those who had the most negative attitudes about aging, compared with those who held positive beliefs.

If you are regularly discriminated against, it’s important to find healthy ways to cope. Experts advise taking the following steps:

Practice self-care. Research shows that activities such as mindful meditation, journaling and exercise can help protect you from the negative health effects of ongoing discrimination.

Focus on your strengths. Concentrating on your core values, beliefs and strengths can counter the negative effects of bias, according to the American Psychological Association. Remember that overcoming hardship will make you more resilient and better able to tackle future challenges.

Seek support. Talking with others who have experienced discrimination or joining a support group can validate your feelings and help you feel less alone. If you are experiencing anxiety or depression, seek professional help from a psychologist or therapist.

Change your beliefs. Unconsciously accepting negative stereotypes about your own group has been linked with psychological distress. Reframing the way you think about your race, ethnicity or age can help. When it comes to ageism, for example, Levy recommends identifying your unconscious age stereotypes and focusing on the positive aspects of getting older.

Take action. For some people, taking steps to protest discrimination can be cathartic. That could include filing a formal complaint, taking legal action, organizing a rally or running for office to enact policies to protect others from discrimination.

Michelle Crouch is a contributing writer who has covered health and personal finance for some of the nation’s top consumer publications. Her work has appeared in Reader’s Digest, Real Simple, Prevention, The Washington Post and The New York Times.

A new report highlights discrimination in the health care system