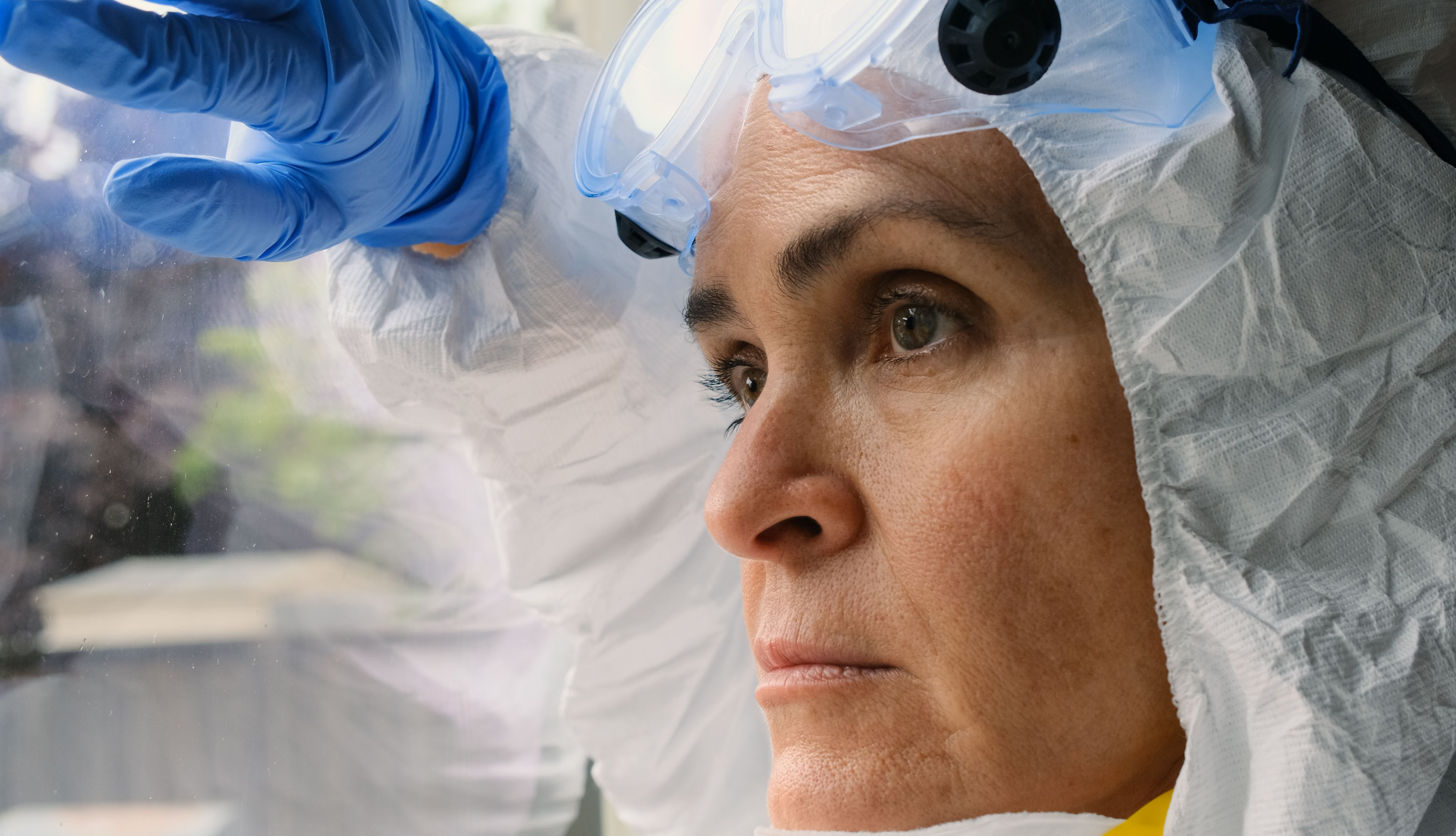 En español | Last January cardiac critical care physician Umesh Gidwani, M.D., attended a retirement celebration for a colleague at Mount Sinai Hospital in New York City. The retiree was a 62-year-old intensive care unit nurse who had been with the hospital for 35 years.

"We did a beautiful party for her at a waterfront restaurant,” Gidwani recalls. “There were speeches and gifts, and her family was there. We thought she rode off into the sunset.”

In March, however, his colleague was back in the ICU — this time as a COVID-19 patient, intubated, on a respirator and fighting for her life. Weeks later, she was one of the lucky ones, extubated and sent home. But health care workers in COVID-19 hot spots across America are caring for, and often losing, not just patients they had never met before but also friends, family and, in some cases, colleagues with whom they have been fighting medical battles side by side. And that can be both physically and emotionally exhausting.

Jodie Freid, a licensed mental health counselor in Natick, Massachusetts, says that while it may be too early to diagnose PTSD in her clients who are frontline workers, she is seeing plenty of fatigue and mental health conditions, including depression, generalized anxiety disorder, panic disorder and insomnia.

Little could have prepared health care workers in hot spots around the country for the kind of adrenaline rush that would accompany the surge of patients in ICUs last March, according to Keith Rose, M.D., director of the critical care division in the department of medicine at Hackensack University Medical Center in Hackensack, New Jersey. “Everyone was working double time to try to care for really sick people,” he says. “It was early and it was new, and everyone was getting it done. Our team did an amazing job, and so did the hospital. It was really impressive.”

But as time wears on and the number of deaths rises, Rose says he's seen staff members becoming overwhelmed, taking breathers in the stairwell or walking outside to collect themselves on a difficult day. “Most are very stoic and say they're fine, but underneath it all you never really know. You can be stoic, but if you're a human being and you've seen a lot, you definitely have to have some feelings about that.”

Beyond the strain of trying to keep an influx of very sick people alive and losing so many of them, there are other stressors: economic concerns, additional home-life responsibilities, such as child care, as well as the sadness that comes with being unable to perform the usual rituals for the dead, like gathering at the bedside for a moment of silence and then doing a mental health check on those involved in the patient's care. “It's so sad to see the absence of these rituals, because they have meaning,” Gidwani says. “They are a process of closure, but there is not time and no practical way to do them now.”

And fears of becoming infected or infecting one's family after so much exposure at work and assuaging worried family members are pervasive. Alicia Kowalski, M.D., professor of anesthesiology at the University of Texas MD Anderson Cancer Center, said that although her residency in anesthesiology was intense and stressful, working in this pandemic elevates the tension and pressure to a completely different level.

"I have colleagues who have separated from their home and identified alternative living conditions in an effort to prevent exposing their loved ones,” Kowalski says.

Freid describes professionals dedicated to helping their patients fight the virus who sometimes don't prioritize their own mental health. “I think they feel they will deal with that later,” she says.

Dealing with it later, however, isn't ideal when it comes to trauma. Robert John Sawyer, medical director for Professional Staff Experience at Ochsner Health in New Orleans, says it's better to talk about what you're feeling and digest the experience. “Ninety-five percent of people will not generally get PTSD from any kind of a traumatic event,” he notes, adding that in traumatized populations, such as prisoners of war and Holocaust survivors, the incidence of PTSD is only about 5 or 10 percent.

"I don't want people to come away worried they're going to get PTSD, like it's an infection,” Sawyer emphasizes. “There are a lot of important things to do to prevent these memories from repeatedly coming back.”

Sawyer says it's important to prevent negative experiences from swallowing the positive ones. In other words, when talking about the trauma of losing patients, health care workers should also speak about the people they were able to comfort or help recover.

Amy Gabrielle Judge, a nurse at Indiana University Health Ball Memorial Hospital in Muncie, says that one of the most difficult things she's had to do in a job in which she's seen everything from gunshot wounds to tuberculosis is put patients on ventilators while treating them for COVID-19 — a frightening sign that their cases are critical. “On the bright side,” she adds, “our hospital plays the song ‘Here Comes the Sun’ by the Beatles when a patient comes off of a ventilator and ‘Pocketful of Sunshine’ by Natasha Bedingfield when a COVID-19 patient is discharged. These songs send a signal of hope throughout the hospital.”

Jagdish Khubchandani, associate chair and professor of health sciences at Ball State University in Muncie, has studied stress in nurses and says research has shown that health care workers are better able to cope with hardship if they focus on their well-being -— through exercise, healthy eating, participation in support groups and telecounseling.

And several health care workers interviewed said they rely on physical activities like walking, running, bike riding and reconnecting with nature to help them decompress and transition from one environment to another. “You need intentional strategies to shift your mindset from going to work to [staying] home,” Sawyer explains, adding that people are less likely to develop PTSD when they recognize their power to self-soothe in healthy ways, rather than refusing to talk about what's on their mind and relying on alcohol or sedatives to relax.

For health care workers who are having first-time panic attacks, flashbacks or bad dreams, therapy and intentional strategies to settle the nervous system sooner rather than later can be beneficial. These may include deep breathing or relaxation exercises to make it easier to fall asleep. “If you already have baseline anxiety, you may be more likely to struggle with this,” Sawyer says. “Reconnect with a prior counselor or someone new. It may only take a few sessions. And all mental health providers are doing telehealth, so it's at the touch of your fingertips with your phone.”

Freid says that in her practice she uses cognitive behavioral therapy (CBT) along with behavior modification techniques and mindfulness-based cognitive therapy (MBCT), which teaches the finest details of being in the present moment. She advises her patients to hold their heartbreaking feelings in one hand and honor them, rather than fighting them. “The more we fight symptoms, the stronger they become.” And she counsels them to hold hope and solutions in their other hand, asking, “ ‘What can you do today to help yourself feel better?’ “ and offering techniques that a patient can apply right there in the moment and carry out into the world after the session.

Many hospitals offer resources for their frontline workers, such as mindfulness sessions, which counselors conduct in designated rooms for decompressing. Sawyer says it's important for employers to give frontline workers time and support so they can effectively digest their anxiety and distress and continue to be effective at their jobs, as well as avoid future depression or PTSD. And, he adds, sometimes leaders need to be taught how important it is to incorporate these support systems into the work culture. “Part of building resilience and coping is to build the skills of frontline leaders."

Rose of Hackensack University Medical Center says his team has made strong efforts to give people days off and insist that they take them. “We really try to factor in who needs a break, and we try to watch for burnout. To burn and churn like that every day takes a toll.”