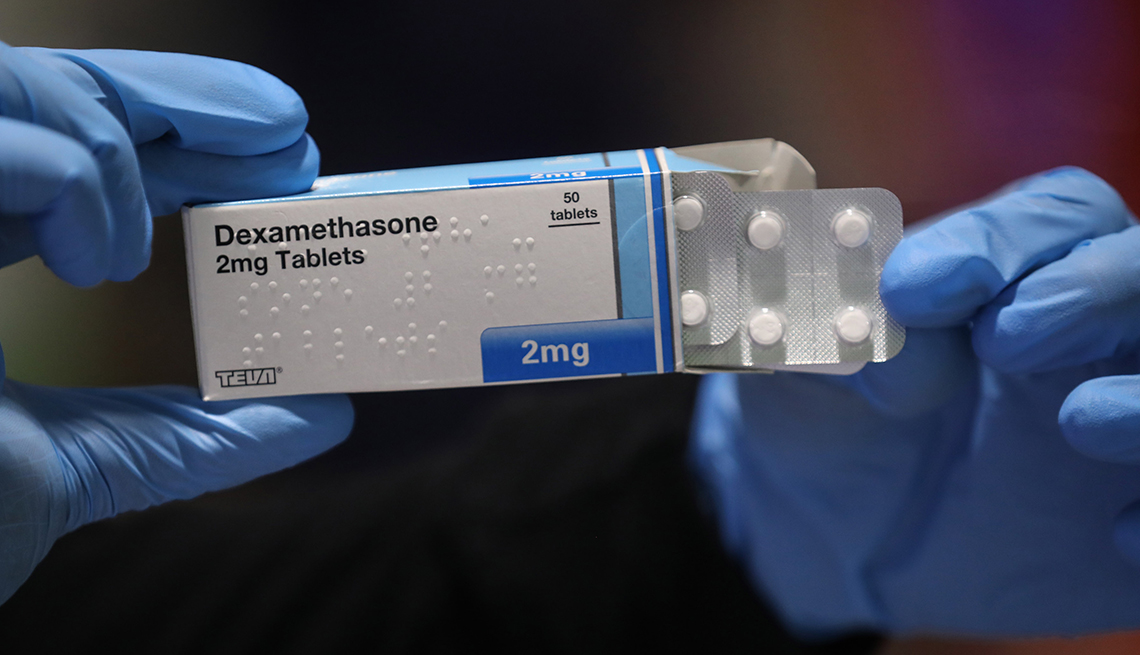 En español | It's official: Hydroxychloroquine is a bust. After months of hype, disappointing clinical trials ultimately led to the Food and Drug Administration (FDA) revoking the drug's emergency use authorization last week. Some physicians weren't surprised: Many had stopped using it long before the FDA announcement, as research failing to support its efficacy for COVID-19 was beginning to mount.

The day after FDA stopped cold the use of hydroxychloroquine, British researchers at Oxford University announced their success treating high-risk COVID-19 patients with a common steroid, dexamethasone. According to their as-yet published research, the drug, already used for conditions such as arthritis or skin disorders, appears to be the first treatment to significantly lower the risk of death for patients on ventilators. For those on oxygen, it cut deaths by even more.

In the ongoing day-to-day treatment of COVID-19, doctors say that most people who contract the virus don't need anything beyond a fever-reducer like acetaminophen, plenty of rest and maybe some chicken soup. Figuring out how to best treat the smaller yet significant group that becomes very ill, however, remains challenging.

"We really have not identified anything that's effective and should be used on a routine basis,” says Neil Schluger, M.D., chief of the Division of Pulmonary, Allergy and Critical Care Medicine at Columbia University Irving Medical Center. He states that for those who need hospitalization, “mostly what we're doing is giving oxygen and making sure patients have adequate hydration and nutrition."

About 80 percent of the time, this kind of “supportive care” is sufficient, he says. Those in the unlucky 20 percent (who tend to be older than 60 with underlying conditions) will likely receive one or more of the following treatments.

When patients develop one of the most deadly aspects of COVID-19, acute respiratory distress syndrome, “the only proven therapy that changes the outcome is low-volume ventilation,” says Ivan Rosas, M.D., chief of the pulmonary, critical care and sleep medicine section in the Department of Medicine at Baylor College of Medicine. Patients who require a ventilator — which pumps oxygen into lungs and removes carbon dioxide — first have to be intubated, which entails putting a tube down the throat and into the windpipe.

Although ventilators don't treat the underlying infection, they can sometimes keep a patient alive long enough to recover while their immune system and/or drugs fight off the virus. “We've had 82-year-olds on ventilators who we've gotten off ventilators,” Schluger says.

That said, younger patients tend to face much better survival odds on the machines than those over 80 do, according to research that includes a recent Lancet study. Physicians are increasingly attempting to keep more older patients off ventilators with an approach that combines proning (see below) and a specific type of oxygen delivery known as nasal cannuluas.

In short, proning involves having a patient lay on their stomach, but it's only that simple if a patient is conscious and not attached to complex machinery. “We've been doing this with COVID patients who are fairly sick but not sick enough to be on a ventilator,” says Schluger, who explains that proning helps direct blood to the parts of the lungs that are healthy enough to continue functioning properly.

At some hospitals, including University of Chicago Medicine, doctors are finding that they can keep many patients off ventilators by combining proning with nasal cannulas (noninvasive tubing that pushes oxygen into the nostrils). This method delivers warm, humidified oxygen to the lungs through the nose, avoiding the risk of lung injury that can be caused by ventilators.

Antivirals work by stopping a virus from replicating. Remdesivir, which has Emergency Use Authorization from the FDA, appears to be leading the pack, but it's not the only contender. Other drugs, such as favipiravir, which is approved as a flu treatment in Japan, has been approved to treat mild to moderate COVID-19 cases in India.

While these drugs seem promising, don't expect an instant cure. One of the largest randomized trials on remdesivir, published in May in the New England Journal of Medicine, found that seriously ill patients who were given the drug recovered in an average of 11 days, versus 15 days for those who were given a placebo.

Upcoming trials will also be looking at combining remdesivir with drugs such as baricitinib (brand name Olumiant) or tocilizumab (Actemra), both of which are FDA-approved for rheumatoid arthritis. There's reason to believe that such combinations will create a more powerful remedy, says Rosas, who likens it to mixing chemotherapy drugs for cancer patients. “The mechanisms of action [of the individual drugs] are different, but they are synergistic,” he says.

When the novel coronavirus was first identified, it was believed to primarily target the respiratory system. That hasn't changed, but some patients are plagued by serious blood clots that can cause strokes or pulmonary embolisms. “The virus may damage the lining of the blood vessels,” Rosas says. “If a patient has biomarkers or other evidence of clotting, we'll add an anticoagulant” such as warfarin.

In April, researchers at the University of North Carolina School of Medicine at Chapel Hill published a statement suggesting that all hospitalized COVID-19 patients should be given blood thinners unless they have a condition that would make doing so dangerous. In some countries, including the Netherlands, this has already become the standard practice.

When you get an infection, your body produces antibodies to it that usually prevent you from becoming ill with the same infection in the future. Convalescent plasma therapy involves taking plasma (part of the blood that contains antibodies) from someone who has recovered from COVID-19 and infusing it into a severely ill patient who's currently battling the virus.

Scientists have been experimenting with this type of treatment for viruses at least since the Spanish flu pandemic of 1918, but whether it proves effective for COVID-19 still remains to be determined. “It's a very active area of investigation,” Schluger says.

Using corticosteroids to treat severe COVID-19 cases has been controversial. These drugs work by broadly reducing inflammation, which is helpful for fighting this disease — but which can make you more susceptible to other infections. Some reports have suggested that timing might be important, and that giving moderately to severely ill patients an “early, short dose” could be the key.

Most recently, U.K. researchers announced early findings from a large randomized trial that found that giving COVID-19 patients on ventilators a low dose of the steroid dexamethasone cut their chances of dying by a third. The full results of the study have not yet been published or peer-reviewed, but Schluger notes that other observational studies have yielded similar findings.

Some COVID-19 patients who become critically ill develop pneumonia followed by a “cytokine storm” — a hyperactive immune response that wreaks havoc on healthy tissue. “The disease starts as a virus, but in some patients the disease becomes this hyperimmune response,” Rosas says.

Irrespective of coronavirus, cytokine storms sometimes occur in patients with autoimmune disorders. When they do, doctors turn to drugs such as tocilizumab (Actemra) or anakinra (Kineret), which are targeted to block specific cytokines (inflammatory proteins). Now doctors are trying to figure out if the same medications can be used to treat cytokine storms in COVID-19 patients.

At Baylor, Rosas is the principal investigator for an international study on tocilizumab, which targets a specific cytokine. Data analysis for this trial is expected to be completed in July. In the meantime, this drug and many others mentioned in this story continue to be used off-label or experimentally as part of various clinical trials.

As for brand-new drugs, prepare to be patient: Although scientists are scrambling to identify novel compounds, the process of discovering, testing and mass-producing a new medication can take years Repurposing drugs that are already on the market for other conditions is the fastest way to help people who are ill right now.

"We understand the anxiety, fear and frustrations patients have about this,” Schluger says. “We have a lot of the same ones. But this is not a time to lower our scientific standards."