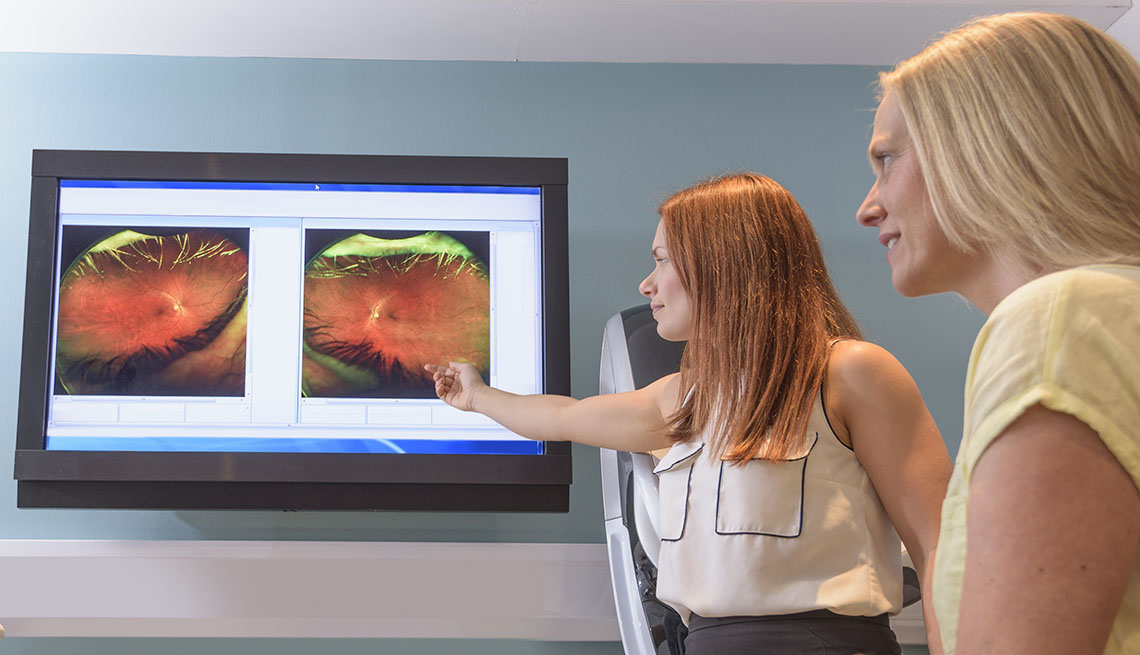 En español | Most people will experience eye floaters in their lifetime, especially as they get older. They’re those tiny spots or lines that look like they’re in front of the eye, but they are actually floating inside it. Flashes, which look like streaks of lightning, are more common with age, too. Most of the time, neither floaters nor flashes are cause for worry. But under certain circumstances, they require immediate medical attention. Here’s what you need to know to protect your vision.

Floaters can be disconcerting. “They can appear as rings, whips, sheets, squiggles or other patterns,” says Ming Wang, M.D., founding director of Wang Vision 3D Cataract and LASIK Center in Nashville, Tenn. Sometimes they’re in the peripheral vision, other times they’re at the center, or both.

Floaters tend to move as the eye moves — for example, moving up when the eye moves up and settling downward when the eyes are still. They’re easier to see on a uniform background (a white wall or a blue sky), or after doing activities that require frequent and quick side-to-side or up-and-down movements, such as driving or reading.

Flashes are different. Wang describes them as “split-second bright white disturbances in the vision” that people often describe as a lightning bolt. They can look like arcs or small streaks, and come and go very quickly, sometimes just at the corner of the eye. They’re more noticeable in the dark, so people may not be aware of them during the day.

Most of the time, both floaters and flashes are due to normal age-related changes in the vitreous, the gel structure that fills the back of the eye and keeps the eye round.

When we're young, the vitreous has a gel-like consistency. Later it becomes more liquid, Wang says, and “strands form together and move through the light pathway in front of the retina.” These are perceived as floating spots, and many people just learn to live with them.

The occurrence of flashes is related to the interaction of the vitreous with the retina. “At younger ages, the vitreous is fully adhered to the retina,” Wang says. “As the vitreous begins to separate from the retina, it can pull on it slightly.” This produces the appearance of a flash in the vision — “as you would see from a camera,” explains Sean Ianchulev, M.D., professor of ophthalmology at the Icahn School of Medicine at Mount Sinai in New York City. Because the pulling force is quick and fleeting, the flash will last only a split second.

Either floaters or flashes can be signs of a posterior vitreous detachment, in which the vitreous separates from the back of the eye — something relatively common after age 50. “All of a sudden, there will be a ton of new floaters or they’re much larger than the individual has ever been used to,” says Vivienne Hau, M.D., an ophthalmologist and retina specialist at Kaiser Permanente in Southern California.

It sounds serious but usually isn’t a cause for concern: About 85 percent of patients who experience a posterior vitreous detachment never develop complications, Hau says, and “most symptoms subside within three months.”

A retinal tear or detachment, on the other hand, is a serious problem. (See below.)

People who are very nearsighted (myopic) are at higher risk for floaters and flashes: “The eyes of nearsighted people are longer than average,” Wang explains. “The vitreous then has to fill a larger space, which makes it more prone to developing the strands and liquid consistency sooner than those with smaller eyes.”

People who have uncontrolled diabetes are also at higher risk because they may have bleeding in the retina, which can manifest as floaters, Ianchulev says.

And trauma, such as a car accident or a punch in the eye, can cause a posterior vitreous detachment or a tear. Recent eye surgery, such as cataract surgery, can do the same.

If floater changes are minor or gradual, there is no need to be concerned. But if the changes are drastic — such as a dramatic increase in the number of floaters, the sudden onset of floaters, seeing something that seems like a curtain coming down over your vision, or any other decline in your ability to see — they can be a useful warning sign of a retinal tear or detachment. In this way “floaters are our friends,” Ianchulev notes.

What to do next

If you notice these signs, see an eye doctor within 24 hours. If you have trouble getting an immediate appointment with your ophthalmologist, contact a retinal specialist. “They are the most prepared specialists to diagnose and treat these problems and handle cases on an on-call basis,” Wang says.

Just be sure you receive a dilated eye exam. “Going for a quick vision check is not enough,” Ianchulev says. An ophthalmologist or optometrist can perform this exam. The doctor will place drops in each eye to widen the pupil (the opening in the center of the iris, the colored part of the eye), which allows more light to enter the eye. Then each eye is examined with a magnifying lens that provides a clear view of the back of the eye, including the retina, macula and optic nerve. The doctor will be able to see whether there has been a tear or a detachment. Neither one causes any pain because there are no pain receptors in the eye, so the exam is the only way to detect damage, Hau says. “If you experience pain, there’s something on the surface of the eye, not within the eye.”

While your eyes are dilated, your vision will be blurry and the effects may last for four to five hours. You should plan to have someone drive you home. And bring sunglasses: Your eyes will be sensitive to light.

If you catch a retinal tear early enough, you can have a laser procedure to have it repaired. This can be done in a doctor’s office, and you’ll go home the same day.

With a retinal detachment, the retina separates from the back wall of the eye, like wallpaper peeling off a wall, according to the American Society of Retina Specialists (ASRS). This is an emergency situation and, if not treated promptly, can cause permanent vision loss. But if you act fast, you can save your sight. According to ASRS, retinal detachment repairs have a 90 percent success rate.