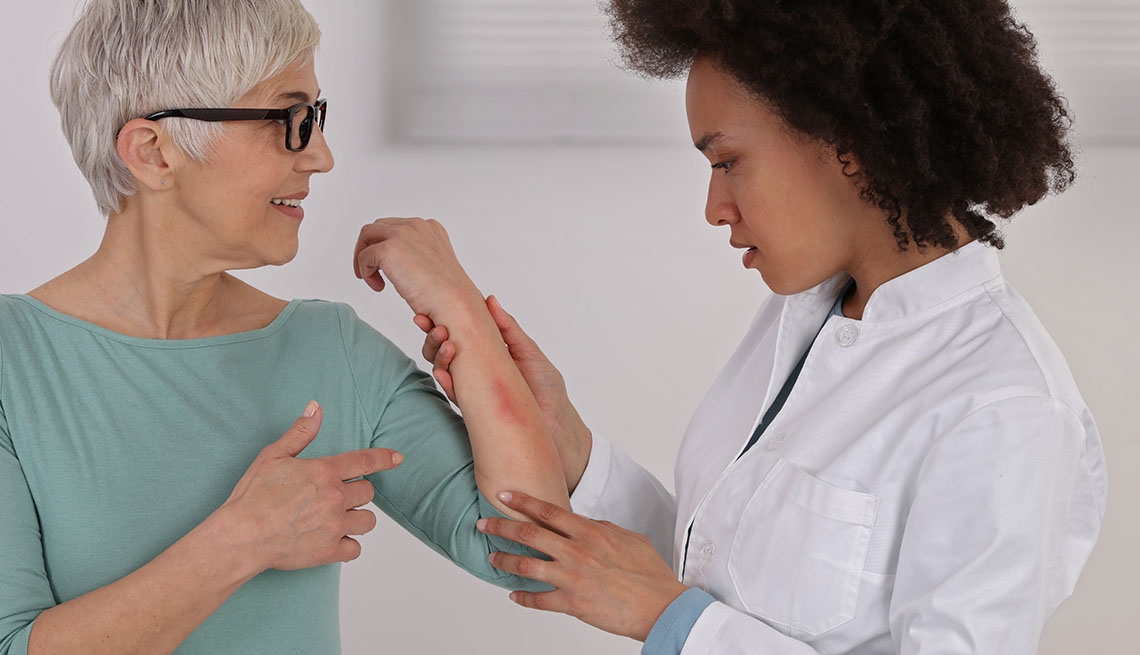 En español | Eczema — that itchy, angry red rash that plagued your childhood — is often dismissed as a children's disease. But almost 10 percent of all adults suffer from this condition, as well. And though the prevalence of eczema dips in young adulthood and middle age, it surges again in adults over 74, according to a study published recently in the Annals of Internal Medicine. “People's skin gets drier as they age, so often someone who had eczema in childhood sees it disappear in adulthood, only to reappear once they hit their 60s or 70s,” explains Lawrence Eichenfield, M.D., chief of Pediatric and Adolescent Dermatology at the University of California San Diego School of Medicine. Here's everything you need to know about this disease: what it is, how to treat it and how to prevent it from driving you nuts.

At any age, eczema is itchy

Unlike kids, who tend to get the condition on places like their cheeks or scalp, adults are most likely to find it in nooks and crannies, including on the backs of their knees and elbow crooks, and even around their eyes. But the same as when you were a kid, eczema tends to be very, very itchy. “It can affect an adult's quality of life just as much as it affects a child's — causing sleep loss, depression, anxiety and even an increased risk of skin infection,” Eichenfield explains.

Eczema flare-ups can be triggered by something known as the “itch-scratch cycle,” Eichenfield says. This is when itching leads to scratching, which results in the release of inflammatory chemicals that worsen eczema by drying out the skin. The vicious cycle continues unless you step in and treat the disease.

The exact cause of eczema is still a mystery, but it's generally thought to be an overactive response by your immune system to an irritant, Eichenfield says. The condition also probably has a genetic link, as it tends to run in families who have a history of allergies and/or asthma. There's not a clear connection between eczema and food allergies. “We know that very young kids who develop eczema are more likely to develop food allergies later, but we usually don't see foods themselves triggering symptoms,” he says.

What's more, there appears to an association between eczema and heart disease. People with severe eczema have a 40 to 50 percent higher risk of unstable angina, myocardial infarction and cardiovascular death, as well as a 70 percent higher risk of developing heart failure, according to a study published last year in the British Medical Journal. (The study also found a 20 percent higher risk of stroke.) “It may be due to a combination of different factors — people with eczema have inflammation in their bodies that may make them more susceptible to heart disease, and they may also have been given medicines such as oral steroids that raise risk of heart disease,” Eichenfield explains. Even more reason to try to bring eczema under control.

Eating foods including fish, Greek yogurt, and colorful fruits and veggies like cherries, blueberries and kale helps fight inflammation that can lead to a flare-up, says Debra Jaliman, M.D., assistant clinical professor of dermatology at the Icahn School of Medicine at Mount Sinai and author of Skin Rules. As tempting as they may be, avoid the drive-throughs; eating at least three weekly servings of fast food is linked to a worsening of eczema symptoms, according to a 2013 study published in the respiratory journal Thorax. Not surprisingly, consuming at least three servings a week of fruit reduced symptoms.

You shouldn't try to treat it yourself

If you notice spots of what appears to be eczema, you may be tempted to dab on some over-the-counter hydrocortisone cream and call it a day. But don't. “Any eczema like rash that lasts for more than a few days should always be checked out, to make sure it isn't another condition such as psoriasis or even a form of cancer called cutaneous T-cell lymphoma,” Eichenfield cautions. If there's any question, your doctor can do a biopsy to make sure.

There's another compelling reason to see your doctor (your primary care physician, a dermatologist or an allergist). “Treatments have really changed over the years,” observes Luz Fonacier, M.D., an allergist at NYU Langone Health in New York City and a spokesperson for the American College of Allergy, Asthma and Immunology. When you were a kid, the only medications that were available were topical corticosteroids, which, when used for extended periods, can thin the skin. But over the past three years, two new eczema meds were approved: Eucrisa, an anti-inflammatory ointment; and Dupixent, an injection that works by blocking a protein that triggers inflammation. Both can be used long-term, making them a better option for sufferers with a more severe case or for those whose eczema doesn't respond to steroids.

This kind of lotion will not only hydrate skin but also help strengthen its outer barrier to hold in moisture and keep out germs that could infect raw, inflamed areas. Look for a product containing ceramides, a type of lipids, to reinforce that protective outer layer, Jaliman says. Also check ingredient lists for jojoba oil, which acts as a natural skin conditioner and has anti-inflammatory properties to soothe irritated skin, she adds. Apply such a lotion after a bath or shower, to trap moisture in.

Another good option: a colloidal oatmeal bath (you can find this at drugstores and health food stores). The American Academy of Dermatology recommends adding this remedy to running lukewarm water, then soaking in it for 10 to 15 minutes. When drying off, make sure you leave enough water on your skin so that it feels damp, and apply moisturizer within three minutes of bathing.

More on Caring for Your Skin