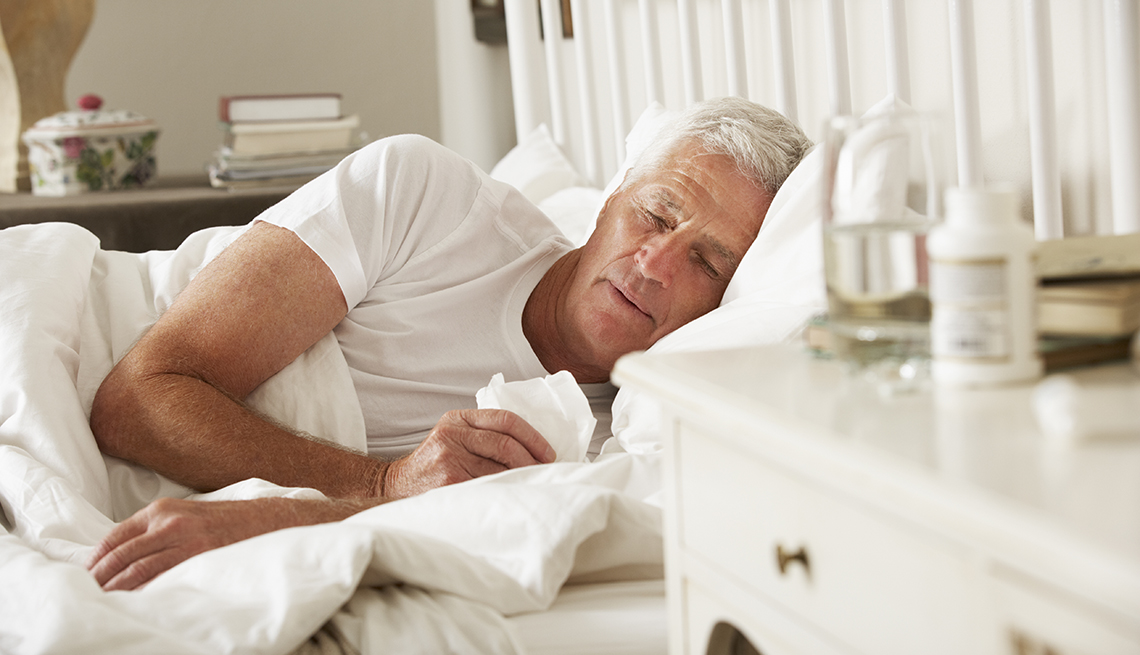 "The only way to treat the common cold is with contempt,” physician William Osler, cofounder of Johns Hopkins Hospital, once said.

But it's also smart to treat it with respect and patience.

After all, over a century has passed since Osler's observation, and the common cold continues to bedevil humanity. “Cold viruses are very hardy and change all the time,” says Ronan Factora of the Center for Geriatric Medicine at the Cleveland Clinic. “You can't vaccinate against the common cold because it's just a very, very difficult virus to keep up with. People have been suffering from the common cold for a long time, and it doesn't look like we'll actually have any specific treatment course any time soon."

If you do catch a cold, you're likely to be under siege for seven to 10 days, says Summer Allen, a family medicine doctor with the Mayo Clinic. To avoid getting one in the first place, follow these six tips.

We get more colds in the winter not because of lower outdoor temperatures but because the cold outside forces us indoors, into closer quarters, for longer periods. “So if someone near us has a cold, there's more potential that we are exposed to it,” says Allen. A typical path of transmission, he says, could start with someone who has the virus coughing or sneezing into their hand, then touching a door handle. If you touch that same handle and then wipe your eyes or mouth with the same hand, you can contract their cold. To prevent this, he says, “wash your hands as often as you can, or use some form of an alcohol-based sanitizer, if open water is not available."

2. Pay attention to your environment

You can't exist in a bubble, but cold viruses are highly contagious, which means they can also be transmitted through tiny virus particles in the air that you breathe in. “If you see people coughing or sneezing, keep your distance,” says Factora.

You don't have to take it to an extreme, but if, say, you're a grandparent hanging around with your grandkids — who are reservoirs for these viruses, getting seven to 10 a year — disinfect the surfaces that are touched the most often, experts advise. This means wiping down things like door handles, countertops, TV remotes, light switches, phones and keyboards.

Keep your drinking glasses and eating utensils to yourself. (Label glasses with the user's name so there are no mix-ups during bigger gatherings.) And remember: The fact that someone in your family is not showing symptoms doesn't mean he or she doesn't have a cold. Symptoms usually appear one to three days after a person has been exposed, Allen says. If someone in your house already has a cold, know that hand towels could transfer the virus, and be vigilant about throwing out dirty tissues.

Though it is absolutely prudent to get a yearly flu shot, remember that it guards against the flu, not colds. “The flu shot is trying to protect you specifically against influenza viruses, usually Type A and Type B, and not the common cold,” Allen says.

Just because you've already had one cold this winter doesn't mean you can't get another one. Adults get an average of two to three colds a year. That's in part because there are hundreds of strains of rhinoviruses ("rhino” means “nose,” which is the place common colds hit hardest) and other cold viruses lurking out there, and having caught one does not make you resistant to another, notes Robert McLean, president of the American College of Physicians.

You're down and out. Now what?

If, despite your best efforts, you feel a cold coming on, here are five things you can do to get over it faster, or minimize your misery.

1. Get plenty of rest

Just like you can be more predisposed to viral illnesses when you're tired, physically taxed or your immune system is a bit suppressed, you'll also get over them faster if you allow yourself enough rest, Factora says.

Drink lots of fluids like water, hot tea or nutrient-laden chicken soup; turn on your humidifier to mitigate the dry winter air and avoid alcohol, which can dehydrate you. “The cold virus stimulates the secreting cells in your sinuses and your nose to make mucus,” says McLean. “If you are relatively dehydrated, the mucus is going to be thicker and harder to clear; and if you're more stuffed up, you may get an infection in the area."

Pain meds like aspirin, acetaminophen (Tylenol), ibuprofen (Advil) and naproxen (Aleve) will ease sore throats and overall aches, while their anti-inflammatory properties can help tame inflamed nasal passages. McLean suggests patients who have well-controlled blood pressure may also take decongestants, as well as cough syrups, if they have post-nasal drip. But while such over-the-counter options can help, you should check the ingredients on the back of every box to make sure that none interfere with or duplicate another medication (like acetaminophen) that you're already taking. Also avoid intranasal zinc. The FDA has warned against these sprays after finding they can damage a person's sense of smell long-term.

“Vitamin C seems to have had more robust medical trials than other things like zinc,” says Factora. Various studies indicate that taking at least 200 milligrams a day can reduce the severity of cold symptoms. “There is generally no harm in taking it, unless you have kidney stones,” says Factora.

5. If symptoms persist, see your doctor

If you're still sick after two weeks, see your doctor, Allen advises. Also seek medical treatment, he says, “if you have been fever-free for two to three days but then see a sudden spike in fever, which could suggest a secondary bacterial infection or something else going on.” Adds Factora: “If you are worried that you have flu symptoms, like muscle aches, high fever or coughing, call your primary care doctor.” If you do so soon enough, he or she can prescribe medications to help reduce the duration of influenza, if it turns out that is what you have. And if you have underlying lung disease like emphysema or COPD (chronic obstructive pulmonary disease) and get any viral illness, there may be a role for an antibiotic.

How the Flu Shot Is Made

The story behind your seasonal vaccine

Is It an Allergy, a Cold or Something Worse?

How to figure out what's behind your sniffles and sneezes