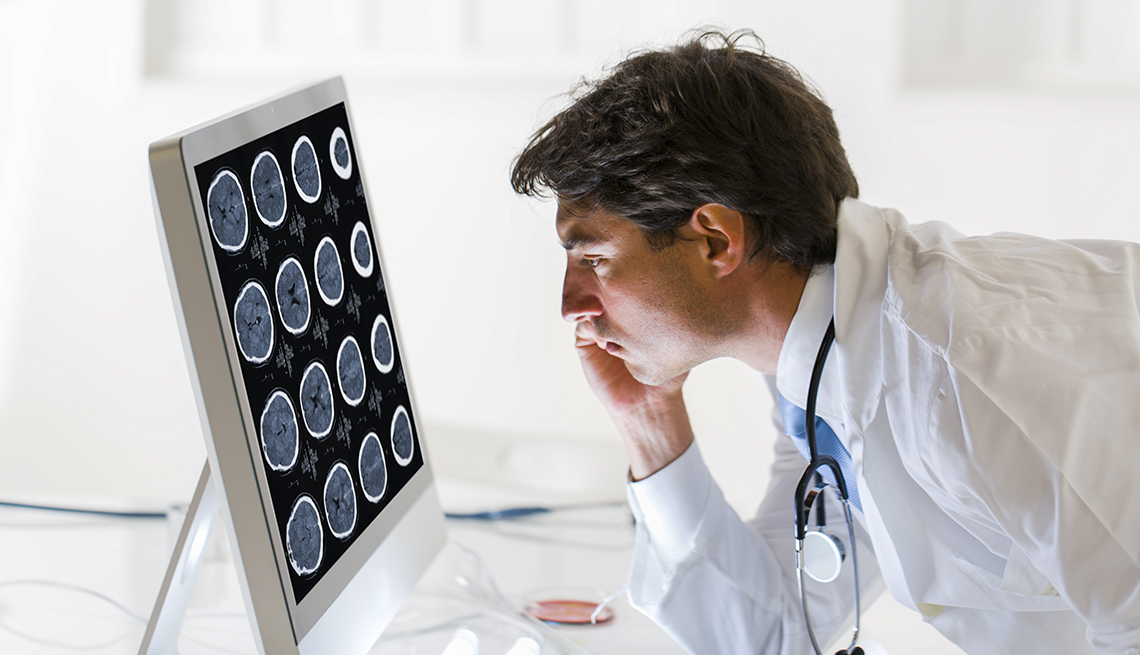 En español | As with many diseases, developing brain cancer becomes more likely as you hit higher ages. Before you start googling a list of symptoms, know that brain cancer — despite what can be intense media coverage of its high-profile sufferers —  is still a rare diagnosis.

In fact, brain cancer represents only 2 percent of cancer cases overall. And the diagnosis can mean different things: The term “brain tumor” may refer to a cancer that starts in the brain or a metastasis or cancer deposit from a cancer that arose in a different part of the body.

There are also many types of brain tumors. Some cases require only surgery and monitoring; others, like the very aggressive glioblastoma that took the life of Sen. John McCain, are associated with significant disability and shorter survival. Actress Valerie Harper reportedly suffered from leptomeningeal carcinomatosis (LMC), a condition in which, according to a New York Times report, “cancer cells invade the fluid-filled membrane surrounding the brain.”

“It is rare for LMC to be the first manifestation of a cancer,” notes Rebecca Harrison, assistant professor of neuro-oncology at the University of Texas MD Anderson Cancer Center in Houston. “Usually, someone already has a diagnosis of cancer, and goes on to develop this. We know that certain cancers, such as lung cancer, are more likely to develop this than other cancers.”

Here, Harrison explains, are the broader outlines of what a brain cancer diagnosis means, who is most at risk and what the future may hold for patients and their loved ones.

What does a brain cancer diagnosis refer to?

Brain cancer diagnoses, Harrison says, can typically be classified into one of two very broad categories. Primary tumors are cancers that start in the brain or in the central nervous system. Secondary brain cancers, or brain metastases, are tumors that come from a cancer in another part of the body.

What are the different implications of primary versus secondary tumors?

In broad terms, Harrison explains, most of what doctors call primary brain tumors generally do not spread to other parts of the body.

Patients with secondary brain tumors have most often had a diagnosis of cancer elsewhere in the body — say, melanoma or lung cancer that they’ve had for months or years. “It’s really rare for us to see someone with a new brain tumor and find out it’s actually a cancer that we just hadn’t discovered before in another part of the body. It happens, but it’s the exception,” she notes.

Who is most at risk for primary tumors?

Primary brain cancers account for less than 2 percent of all cancers, Harrison stresses. That said, for tumors that start in the brain — many of which fall under the category of gliomas — the two main risk factors are age and prior radiation to the brain, as when a patient has received brain radiation years before for another cancer.

About half of patients who have glioblastoma, the most common malignant primary brain tumor, are over the age of 65. “We’re still trying to figure out the precise relationship with age,” Harrison says. Previously, patients over age 70 were excluded from landmark research studies; that’s changing, as more clinical trials include older patients in their research.

“There are now specific clinical trials or evaluations of treatment regimens in the elderly with glioblastoma, specifically to better understand what is the optimal treatment regimen for this patient population, to try and maximize our treatment impact while minimizing some of the side effects and adverse effects,” Harrison explains.

What does treatment for primary brain cancer usually involve?

In general, brain tumors are treated with some combination of surgery, radiation and medical therapy, meaning pills or IV drugs to treat the tumor. Treatment for glioblastoma, the most common primary brain tumor neuro-oncologists see,  usually begins with what doctors call “maximum safe resection” — a surgeon removing as much of the tumor as can be safely done.

The purpose of surgery, Harrison explains, is twofold. First, it provides or confirms a definite diagnosis, as the tissue that’s removed during surgery is analyzed by a pathologist who evaluates the tissue and determines the type of cancer involved. Second, it can provide a therapeutic benefit: Studies have shown that surgery to remove as much of the tumor as possible portends a survival advantage. It’s important to make clear, Harrison says, that even if you have an excellent surgery, the surgery for a cancer like glioblastoma is not a cure.

Approximately three to four weeks after surgery, when the scalp and tissues have had a chance to heal, the next stage of treatment generally involves a combination of radiation therapy and chemotherapy, given at the same time. After this “concurrent therapy phase,” there’s a wait of four to six weeks. Then patients initiate what doctors call “adjuvant chemotherapy,” or chemotherapy alone. They receive temozolomide, the same chemotherapy drug they received during radiation, but at a higher dose and in a different fashion: They take it for five consecutive days every four weeks, for six to 12 cycles, or about six to 12 months.

MRI scans are done periodically during and after treatment.

What does research show about survival rates?

“Survival numbers are averages, and we certainly have people who are on either end of these averages,” Harrison notes. “It’s important for people to be aware of that and to maintain the hope and the knowledge that we don’t hold a crystal ball and that there are people who defy the statistics.”

That said, glioblastoma is very aggressive. In adults as a whole, overall survival is estimated to be around 15 to 18 months. In the elderly, overall survival can be less than a year, often between seven and nine months.

What are brain cancer symptoms or when should someone worry they could have the disease?

Symptoms can take on different forms, depending on where in the brain the cancer is and how large it is. Some patients present with seizures, others may experience weakness or numbness in some part of their body, or difficulty walking, or significant changes to their memory or their ability to process information or interact with people. Again, Harrison emphasizes, it’s important for people to know that there are many potential causes for each of those symptoms, which is why if you have any of them, you should see a doctor for a thorough evaluation.

Does palliative care play a role in treatment?

“Many of us who see brain cancer patients recognize its importance and we know that it has a really important role in the care of our patients,” Harrison says. Palliative care can be given by a patient’s oncologist or a palliative care physician, and may involve talking about things like advanced directives or how a patient and her family is coping; it could also mean dealing with symptoms such as fatigue or cognitive changes. Palliative care can be incorporated early on and will take on an increasingly important role with time.

What could the future hold for brain cancer treatment?

Cutting-edge treatments are being actively pursued, Harrison says. Right now, she says, immunotherapies that try to harness the immune system or modify it to enable it to better recognize and attack a cancer are not routinely prescribed for glioblastoma. But that could change. Many clinical trials are currently enrolling patients with the goal of evaluating which brain cancer patients may benefit from which type of immunotherapy in the future.