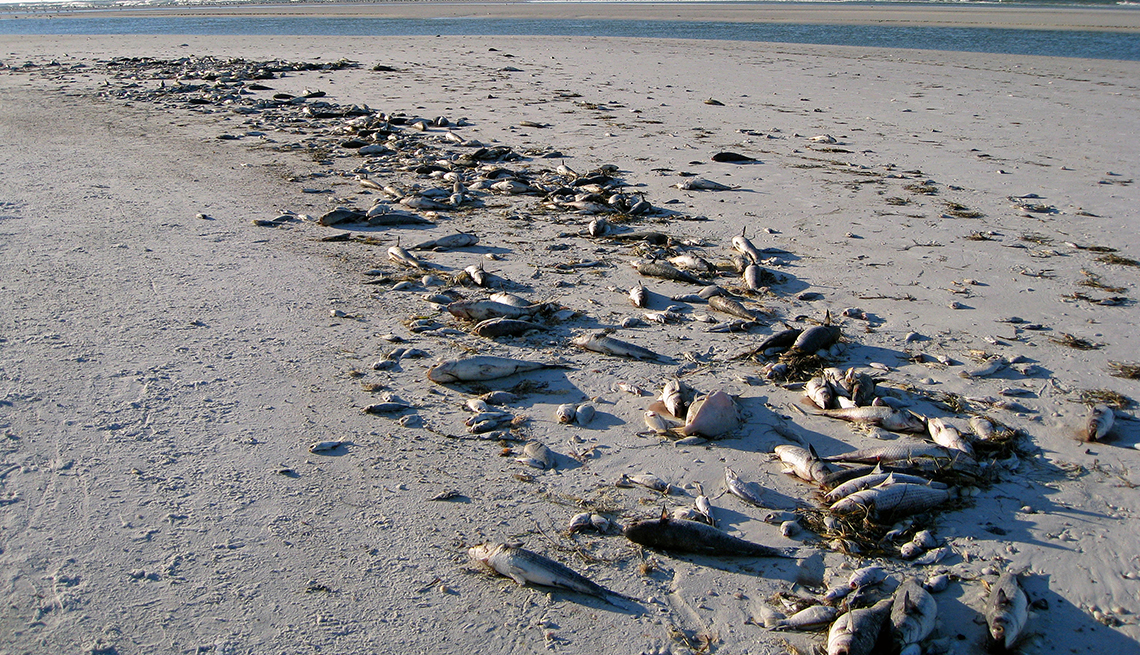 The waters along the west coast of Florida are steeped in a smelly, toxic stew known as “red tide” that can cause respiratory problems, especially among older people, and kills fish by the thousands.

This week Florida Gov. Rick Scott declared a state of emergency for seven tourism-dependent counties along about 150 miles of Gulf of Mexico coastline, from just south of Naples to around Sarasota — a stretch of seaside that’s home to some of the most popular and beautiful beaches in the country, including Siesta Key and Sanibel Island.

Red tide, which has occurred periodically here since at least the 1840s, is caused by the overgrowth of microscopic algae known as Karenia brevis, which can sometimes turn waters reddish or brown. It's deadly to sealife — the horrible odors are the result of decaying fish that wash up onshore — including large sea creatures, such as manatees and sea turtles.

But red tide is also harmful to humans. Algae release toxins into the air that settle in the throat and lungs, a serious concern for those with already compromised respiratory systems from conditions such as emphysema and asthma, says Don Anderson, senior scientist in the biology department at the Woods Hole Oceanographic Institution in Massachusetts and an expert on algal blooms. “But it’s typically not a life-threatening situation,” he says. “It’s more bothersome … than insidiously dangerous.”

Usually, the airborne toxins cause just an itchy throat or cough — what’s known as a “red tide tickle.”

“I get kind of a scratchy throat,” says John Lucas, 68, a retiree in Bradenton who headed out to Lido Key Beach about a week ago, when red tide had just moved heavily into the area near Sarasota. He found it deserted, with dead fish littering the sand. Lucas didn’t hang around very long. “If you stayed there for a few hours,” he says, “you’d feel terrible.”

Scientists aren’t sure what causes red tide, though some have speculated that it’s related to agricultural pollution that drains into the Gulf. There’s also no approved way to kill the algae: Floridians just have to wait for it to dissipate — which it often does quickly. “One of the mysteries is why this one is going on so long,” Anderson says.

This recent bloom began causing alarm last year and is lingering longer than others in recent years.

But there’s good news for snowbirds and vacationers who plan to head south during Florida’s peak tourism months, says Stephen Leatherman (known to some as Dr. Beach), director of the Laboratory for Coastal Research at Florida International University. “The warm waters help the algae bloom, so the red tide usually ends by fall when the weather cools. It’s very unlikely to be there in the high season.”

To see if your destination is clear of red tide, Sarasota’s Mote Marine Laboratory & Aquarium keeps an updated statewide map online that indicates the affected areas.