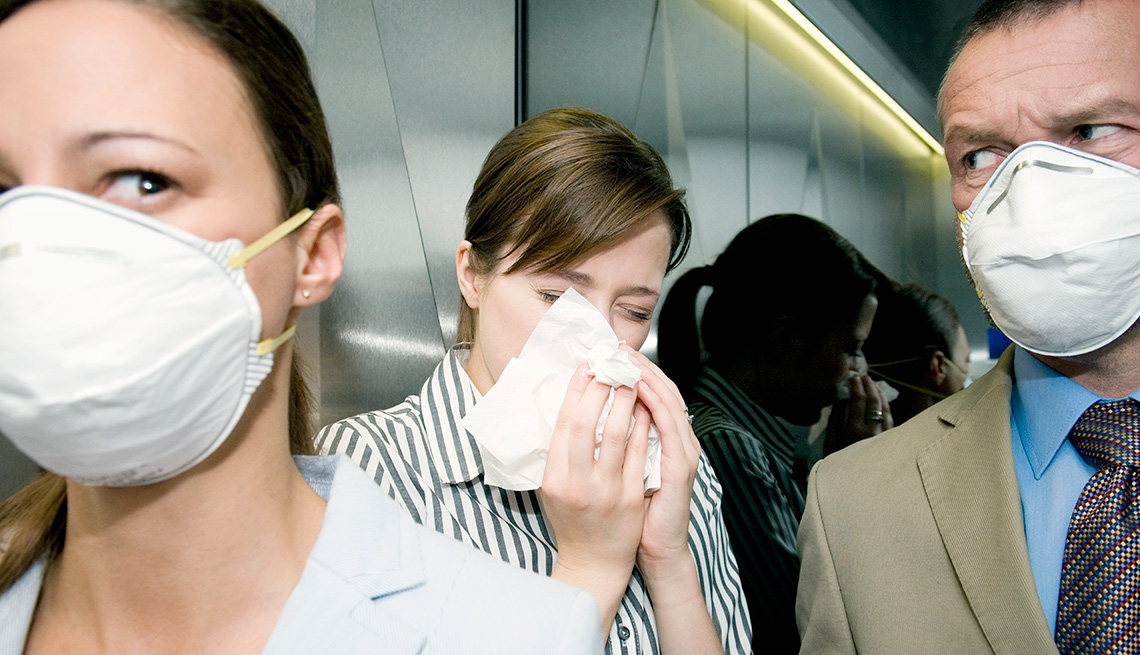 Researchers found that tiny aerosols that escape with normal breathing stay suspended in the air and can pose a risk of airborne transmission of the flu.

First, the bad news. Last week’s flu report from the Centers for Disease Control and Prevention (CDC) showed that flu is surging all at once in 49 states. The other bad news? A recent study from the University of Maryland revealed that you may be likely to catch it after a sick person simply exhales — not sneezes or coughs — near you.

“We found that flu cases contaminated the air around them with infectious virus just by breathing,” explains Donald Milton, M.D., professor of environmental health at the university and the lead researcher of the study. “People with flu generate infectious aerosols, or tiny droplets that stay suspended in the air for a long time, even when they are not coughing.” They do this, he says, especially during the first days of illness.

The results, published in the Proceedings of the National Academy of Sciences, indicate that the tiny aerosols that escaped with normal breathing (or when the 142 certifiably fluish college students did things like recite the alphabet) and stayed suspended in the air could pose a risk of airborne transmission.

And, yep, all this means just what you’re worrying it means — that you're not safe simply staying away from people who are coughing and that "handwashing alone is not enough," Milton says.

What could help? Staying home and away from public places. Or if you're the one with a fever and sore throat, whether or not you have a cough, "stay away from other people for at least three to four days or until your fever is gone — whichever is longer," Milton recommends.

Milton says he is doing further studies to try to figure out if the risk of airborne influenza transmission is limited to a few feet or occurs at longer distances and through ventilation systems.

But for now, don't give up on washing your hands like crazy or wiping down surfaces with disinfectants until we see the end of this "moderately severe" flu season. While coughing isn't as critical to airborne transmission as once thought, it can transmit the virus to surfaces like phones or doorknobs, where they can remain “live” for up to 24 hours, the CDC reports.