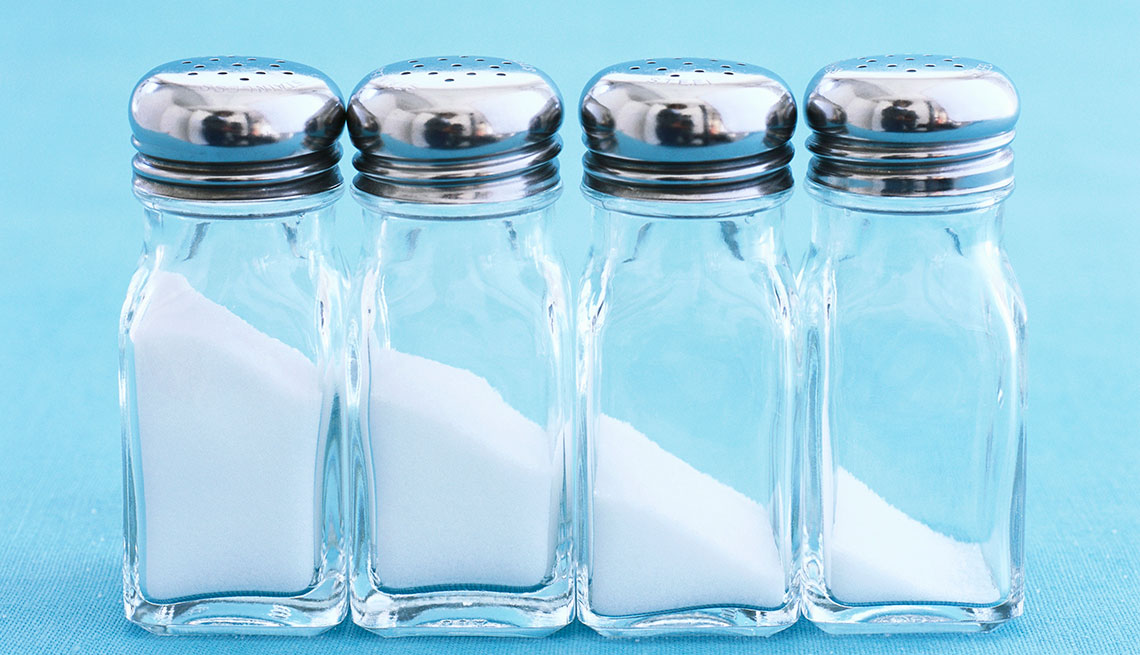 En español | Both over-the-counter and prescription medications are mainstays of headache relief. In most cases they're lifesavers, yet they don't work for everyone and many have unwanted side effects. Researchers have found new ways to deal with headaches, some rooted in ancient traditions and some novel and noteworthy. These headache busters run the gamut from eating more veggies and consuming less salt to wearing a sci-fi headband.

If you're tired of dealing with painful headaches, cut down on salty foods. A study from Johns Hopkins University reports that people who switch to a low-salt diet develop far fewer headaches. Researchers assigned nearly 400 adults to either a healthy diet designed to lower blood pressure or to a typical Western diet high in fat and salt. People in both groups who ate foods high in sodium had a whopping one-third more headaches than those who ate low-sodium foods; the difference remained even when they switched from one diet to the other.

But cutting salt intake from 3,600 mg of sodium a day (the American average) to around 1,200 mg (about half a teaspoon of salt) reduced the number of headaches considerably. Although headaches have been tied to high blood pressure, men and women with normal blood pressure also had fewer headaches when they ate less salt. "The link between salt intake and headaches is interesting, but getting down to the lowest level of sodium used in this study is probably unrealistic," says Robert Eckel, M.D.,a professor of medicine at the University of Colorado Denver. "Cutting back to 2,400 mg, however — the amount recommended by the American College of Cardiology and the American Heart Association — has documented health benefits."

To get off a headache merry-go-round, give yoga and meditation a chance. "Both of these disciplines effectively relieve headaches," says Crystal Park, a professor of psychology at the University of Connecticut. "In addition, they reduce stress, anxiety and tension, which in turn can ease headache pain." A combination of the two ancient practices, called mindfulness-based stress reduction (MBSR), is another way to ease tension headaches and migraines.

Adults with migraines who practiced MBSR for eight weeks had fewer and less severe migraines than those receiving standard care, according to a pilot study published in the journal Headache in 2014. An added plus: Their headaches didn't last as long and were less disabling. 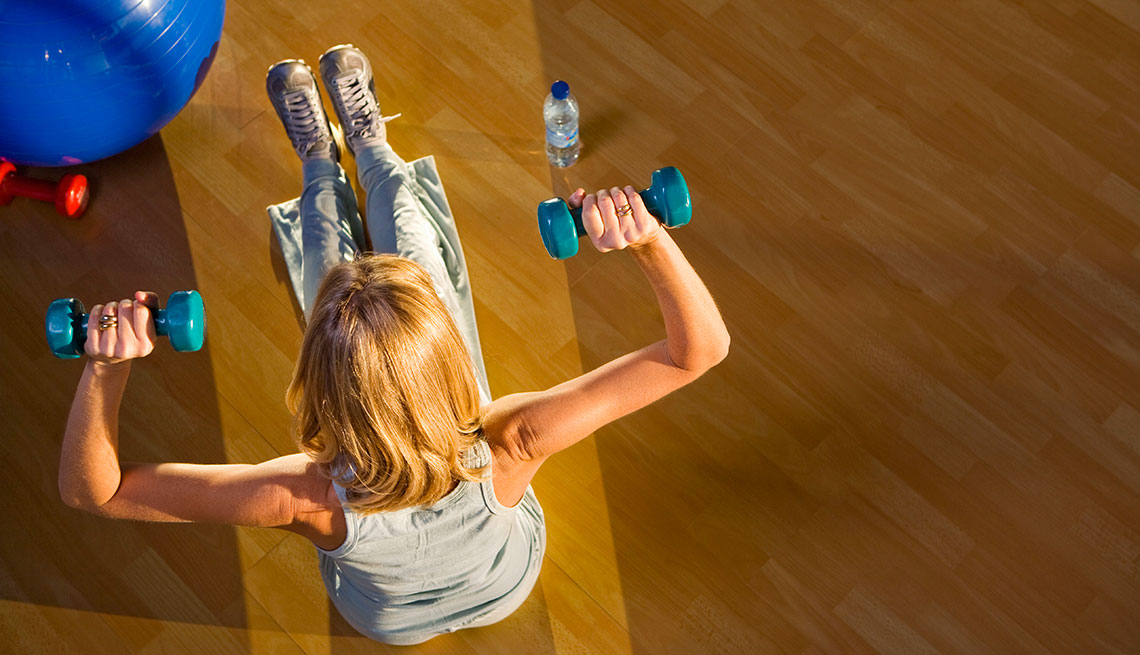 Strength training shows promise in preventing or reducing the pain of tension headaches. A small study from Denmark compared neck and shoulder strength in 60 men and women with chronic tension headaches and 30 without. The muscles of those in the headache group were up to 26 percent weaker than the headache-free group. The headache group also showed a strength imbalance between the sets of muscles that hold the head straight, a problem that may stem from the head-forward slouch familiar to everyone who uses a laptop, tablet or smartphone.

Strengthening the trapezius, the large muscles at the back of the neck and upper part of the chest, might provide relief. The authors recently completed a study testing that theory and expect to publish the results this fall. In the meantime, remember to sit up straight and go to the gym. 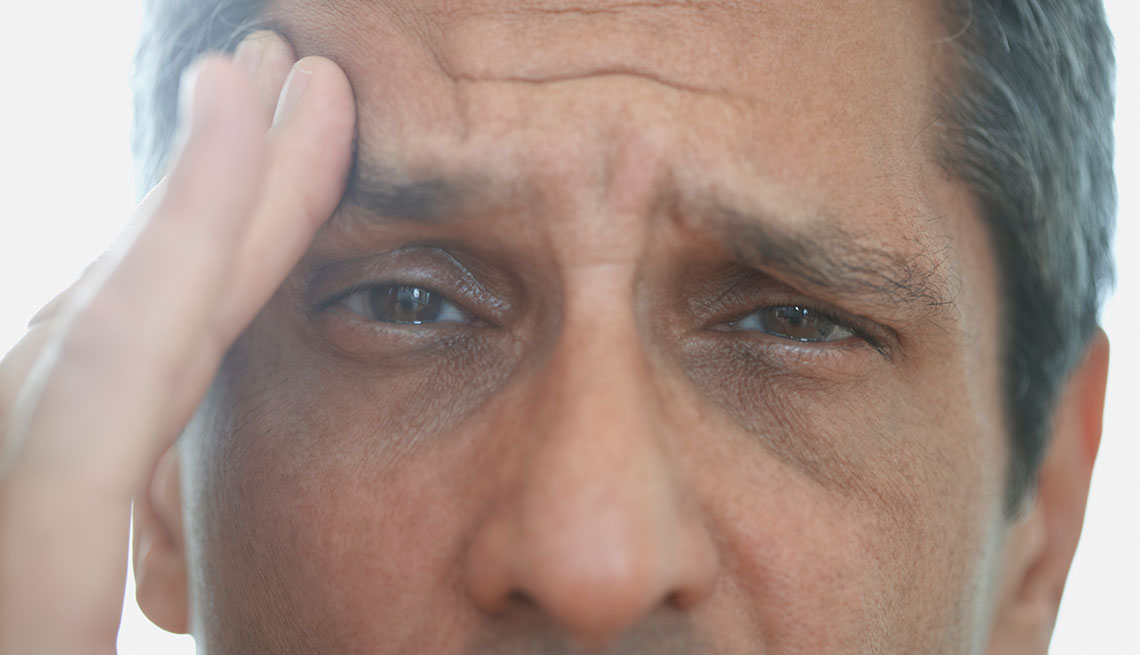 Topofen, a fast-acting gel rubbed on the skin, may turn out to be an effective treatment for migraines, according to a small study presented at the annual meeting of the American Academy of Neurology. Researchers asked people with migraines to apply a pea-sized dab of gel to both temples during a migraine attack. The skin and underlying tissue quickly absorbed the drug, a formulation of the powerful nonsteroidal anti-inflammatory drug (NSAID) ketoprofen. Applying the drug to the skin will help prevent potentially serious complications, such as ulcers and intestinal bleeding, that may occur when swallowing pills or liquid.

Researchers reported that Topofen provided sustained pain relief to half of those with severe migraines. The gel is still in the early stages of testing, however, so it could be a while before it receives approval by the U.S. Food and Drug Administration (FDA). Stay tuned. 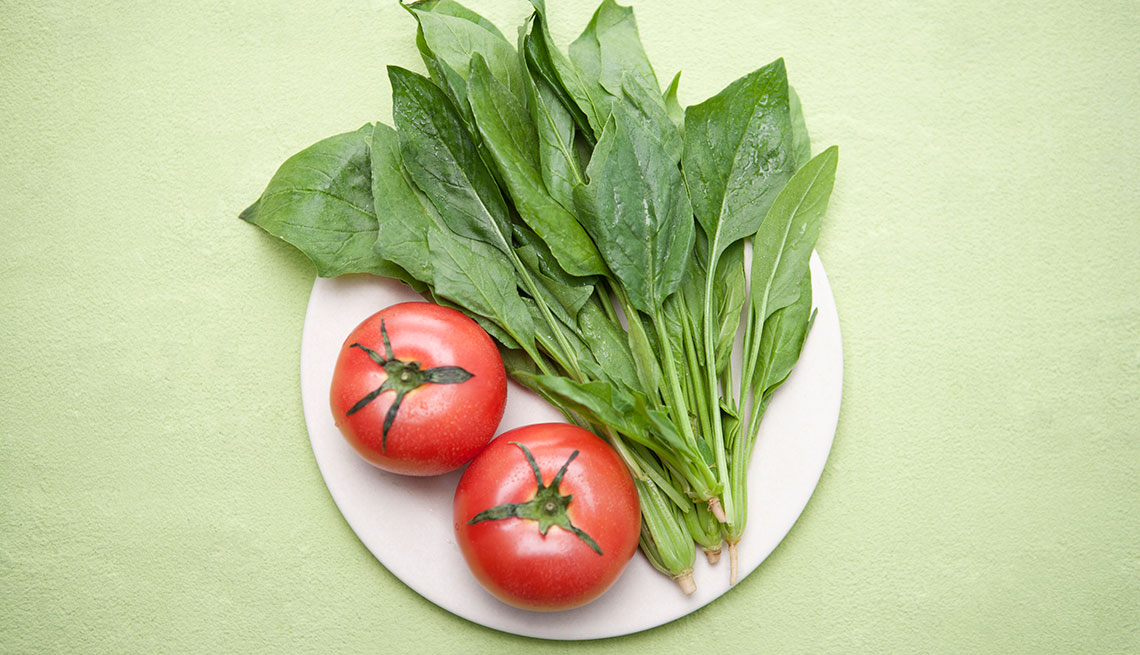 Eating more folate-rich foods, such as spinach, may considerably reduce migraine frequency. Supplements of folic acid (a form of folate) and vitamins B6 and B12 already have been shown to help, but researchers at Australia's Queensland University of Technology wanted to find out if dietary folate, vitamin B9, was also effective. They looked at records of women who suffered from migraines with auras (visual changes that warn of an impending headache) and found that the amount of folate-rich food a woman ate was significantly related to how many migraines she developed: the more folate, the fewer migraines.

Not a great fan of spinach? Other folate-rich foods include broccoli, cantaloupe, eggs, lentils, strawberries, kale, avocados and grains fortified with folic acid. "Increasing your intake of dietary folate may be good not only for migraines, but also to help reduce your risk for having a stroke," says Jeffrey Blumberg, professor of nutrition at Tufts University. 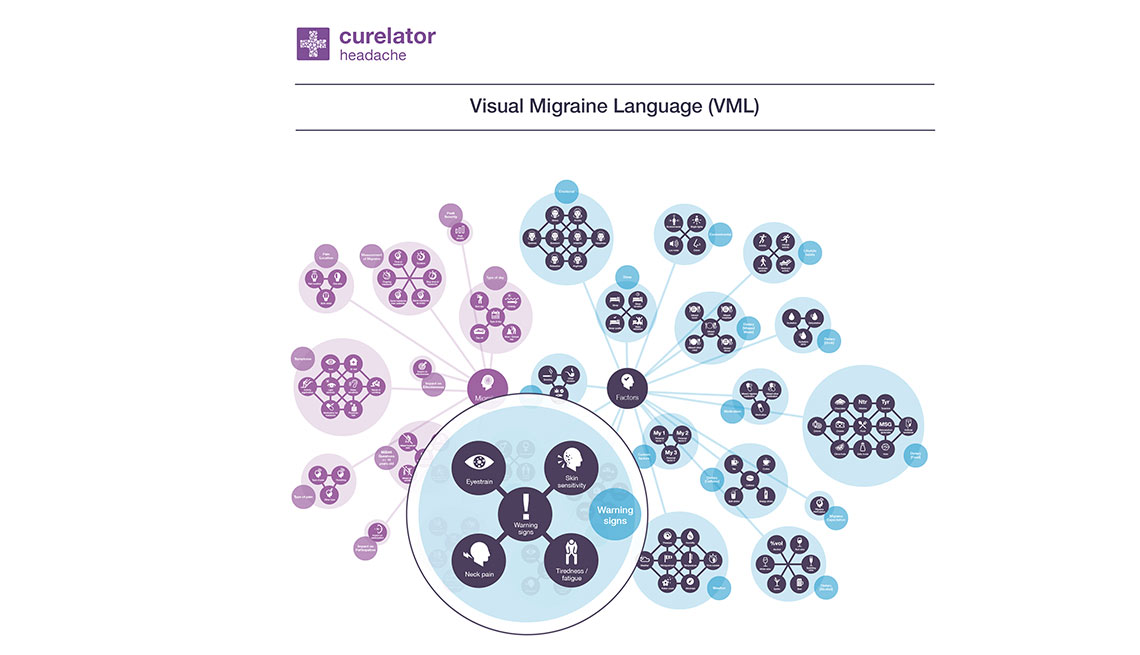 Curelator Headache is a Web-based app. It uses pictorial symbols to create maps that help people identify triggers and other factors that might cause or protect against migraines. To construct the maps, users spend two or three minutes each day for three months entering information; the symbols simplify and speed the process. The app tracks everything from what you eat to the local weather to your work schedule.The company then processes and analyzes each person's data using sophisticated statistical techniques to generate a graphic, personalized map that works out whether a possible trigger will or will not be followed by a migraine. By the end of the year, the company expects to add a new map that can predict a migraine before it hits. "This is the first time that anyone has identified environmental factors unique to an individual that provoke as well as prevent migraine attacks," says Alec Mian, CEO of Curelator Inc. "It's very exciting."

Curelator Headache is currently available for $49 for iPhones, and iPads.from the iTunes store or curelator.com. An app for Androids will be available by the end of the year. 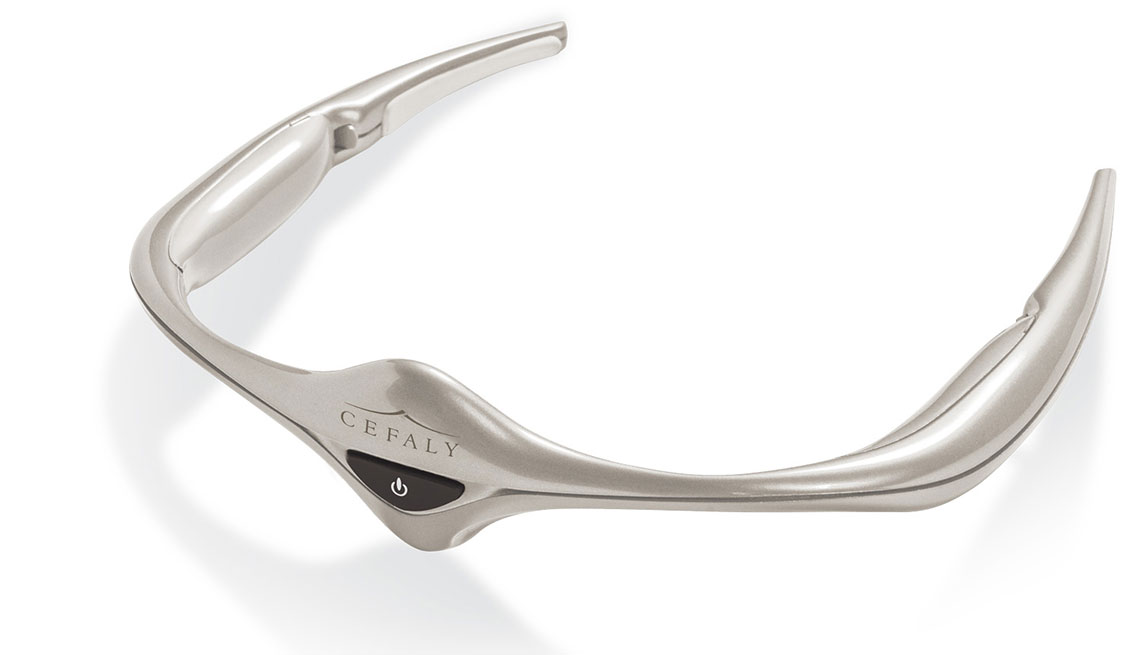 A wireless, battery-powered device called Cefaly, which looks like Wonder Woman's headband, zaps migraines before they start. The band emits a low electrical pulse through the skin to the trigeminal nerve, a major pain pathway involved in causing migraines. The technique, called TENS (transcutaneous electrical nerve stimulation), has been used for years to relieve pain, but this is the first device approved by the FDA for prevention of migraines.The device is meant to be used once a day for 20 minutes. Side effects (discomfort, sleepiness, tingling sensation) were rare and easily reversed. "Cefaly shows promise as a migraine preventive that doesn't involve taking medication — and that's a great advantage," says Amy Gelfand, M.D., a neurologist at the University of California, San Francisco, Headache Center, who is not associated with the product. "But we need more research to help us really understand its therapeutic potential."

A small study showed that regular use reduced, but did not completely eliminate, the number of attacks and cut the amount of migraine medication needed. Cefaly is available only with a medical prescription. The headband costs $349, a three-pack of electrodes — each good for 20 uses — goes for $25, and shipping and handling adds an additional $15. Insurance does not cover the device.

Nissa Simon is a freelance health and science writer.