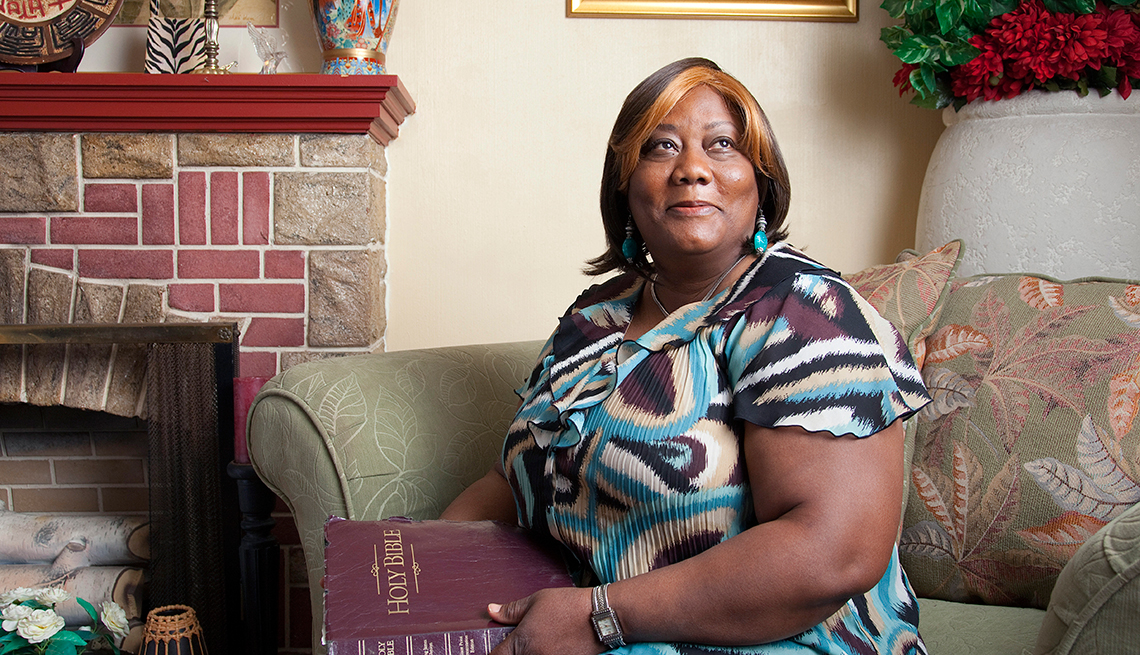 En español l "I think I'm having a heart attack," Georgia Chapman said, to anyone who would listen. Two paramedics and an emergency room doctor told her no, she was fine — just a healthy 55-year-old stressed out from working two jobs. Go home and rest, they said.

Chapman wasn't buying it. "We are wasting time," she insisted, planting her feet. By the time the cardiologist saw her and rushed her into surgery, three of her heart's four arteries were completely blocked. One required a stent to restore blood flow.

Unfortunately, ordeals like Chapman's are not uncommon. Recent studies have found that if Georgia had been George, a man age 55, she likely would have been tested and treated immediately. "The number one reason women are misdiagnosed is that they aren't referred for testing," says Noel Bairey Merz, M.D., director of the Barbra Streisand Women's Heart Center at Cedars-Sinai Heart Institute in Los Angeles, and one of the world's leading experts on women's heart disease. "The doctor will say, 'You look good; it must be heartburn. It must be your gallbladder.' "

Every day more than 500 women in the U.S. die from coronary heart disease, due largely to ignorance. Despite increased attention and well-funded public-awareness campaigns (think Go Red for Women), 46 percent of women still don't know that heart disease is the nation's number one killer of women. Even doctors don't always recognize the symptoms. Indeed, women are seven times more likely than men to be misdiagnosed, according to the New England Journal of Medicine. If Bairey Merz gets what she wants — more research, more testing and better heart-health education — the death rate for women afflicted with heart disease and heart attacks could decline significantly.

"Nine million women die of cardiovascular disease every year worldwide," she says flatly. "If a virus came around and did a fraction of that …" She trails off, shaking her head. "It's mind-boggling. Heart disease is the most costly, the most preventable, the most deadly, yet we spend the least amount of money on screening."

As a young doctor, Bairey Merz, now 58, wondered why so many women with heart attack symptoms had no evidence of heart blockages — and why so many returned for medical care, often disabled or dying from heart attacks.

At that time, most doctors still believed heart problems were rare in women, especially those under 65. Nothing could be further from the truth. More U.S. women have died of cardiovascular disease than men in every one of the past 30 years. And since 1998, even as overall deaths from heart disease have been slashed by nearly a third, there is one glaring exception: Heart disease deaths in younger women — those who are under 55 — keep rising, according to the journal Global Heart.

Part of the problem is the medical establishment's failure to allocate research money to the disease. Every year, Bairey Merz notes, almost $675 million is spent on breast cancer research in the U.S., compared with about $173 million on research about women's heart disease, which kills five times as many women as breast cancer annually. "Women are more likely to be missed because of our failure to do research in women," Bairey Merz says. "We have to recognize that the last 70 years of heart research has been conducted in men, for men and by men, so we have knowledge gaps about what may work best in women."

While more research is clearly needed, Bairey Merz has immersed herself in the cause. She has some 200 research papers to her name, and her offices have become the de facto laboratory for women with persistent but undiagnosed cardiac symptoms. Such as the 34-year-old vegetarian mother of three, an avid runner, whose heart arteries were almost fully blocked, even though her doctors had told her all was well. Or the pediatric nurse reassured by 10 cardiologists that her debilitating chest pain was benign, before finally getting a correct diagnosis and effective treatment. Then there's the patient who had extensive dental work for her jaw pain before learning she had advanced heart disease.

Examining these patients, Bairey Merz — along with a handful of other researchers — has made critical progress in determining why this deadly disease has been misdiagnosed for so long. It boils down to this: Heart disease manifests itself so differently in men and women that the old tests just don't tell the full story.

A case in point: Nearly half of women with chest pain have coronary microvascular dysfunction (CMD), a condition for which Bairey Merz coined the name. In these cases, dangerous plaque builds in the smaller blood vessels of the heart rather than in the large arteries. (Though men can also have CMD, they are more likely to have the large blockages in the main arteries, which are easier to spot.) Traditional tests, including angiograms, can miss the blockages in the smaller arteries even in advanced stages, when they can clog tiny vessels surrounding the heart. Each week, Bairey Merz sees between five and 10 new patients she suspects have CMD; she sends all of them for further testing.

The definitive test for CMD is a coronary reactivity test, explains Bairey Merz. Similar to an angiogram, it allows doctors to examine the smaller blood vessels as they are exposed to different stimuli. If a woman does have CMD, Bairey Merz starts her on treatment proven to increase blood flow to the heart — including medication and lifestyle modifications — then monitors her progress.

Many other time-honored tests, such as a standard stress test, are also less effective at picking up heart disease in women. And women show different patterns in blood tests, electrocardiograms and echocardiograms. "We can use the same tests we use with men, but we need to read them differently for women," says Bairey Merz. Plus, she uses risk-score calculations that have been developed for women, not men.

Newer diagnostic tests look promising. A highly sensitive blood protein test used in Europe diagnosed twice as many women as the conventional blood tests that U.S. hospitals currently use. (A few U.S. hospitals have begun using this test, Bairey Merz says.) At some hospitals, doctors use a CT scan to measure calcium levels in the heart to assess risk — and if a woman has a high score, she is treated more aggressively.

Along with relearning how to read test results for women, doctors need to be more fully aware of both the unique symptoms of the heart attack itself and risk factors for women. Gender-specific symptoms include shortness of breath (48 percent of women with the disease, compared with 35 percent of men), and nausea and vomiting (41 percent, versus 14 percent in men). Risk factors for women include lupus and rheumatoid arthritis — autoimmune diseases that often damage women's hearts. Early-onset puberty and polycystic ovarian syndrome also bring higher heart risk. And women who've had problem pregnancies (preeclampsia, gestational diabetes) are more likely to develop heart disease years later.

"Pregnancy may unmask the risk that a woman already has," says Sharonne N. Hayes, M.D., founder of the Women's Heart Clinic at the Mayo Clinic in Rochester, Minnesota. "There is added stress on the heart. As a doctor, I need to ask her about her pregnancies. If she had problems, then maybe I need to treat her high blood pressure rather than watch it."

Severe shock can also take its toll on women in ways researchers are just beginning to understand. "Broken heart syndrome," or takotsubo cardiomyopathy, causes sometimes-fatal heart damage to mostly menopausal and postmenopausal women who have undergone a sudden stress such as losing a spouse, being in a car accident or being a victim of a violent crime, says Randolph P. Martin, M.D., chief of structural and valvular heart disease at Piedmont Heart in Atlanta. "It was thought to be rare," he says, "but now we know it's not. It looks like they've had a giant heart attack, but their arteries are clear."

These and other basic facts about women's heart disease — the breadth of the disease, the need to recalibrate testing, the clear risk factors — have been slow to filter down to the community hospitals and doctors' offices where thousands of women are seen, ignored and sent away, often with tragic results.

When heart disease is diagnosed, though, current treatments greatly increase the life span of the survivor. Smoking-cessation and exercise programs work well for women. Specialized diets have been shown to cut heart attack deaths. Aggressively managing diabetes, blood pressure and high triglycerides yields good results. Women who have suffered heart attacks and enter a cardiac rehabilitation program that emphasizes medication management and lifestyle changes have significantly higher survival rates. "We have four magic pills," Bairey Merz says, counting them off on her fingers: baby aspirin, statins, beta-blockers and ACE inhibitors. "We know that if a woman has a heart attack and she takes these four pills, she is 90 percent more likely to survive that first year."

Georgia Chapman never had chest pain with her heart attack. She did, however, have other symptoms common to women: shortness of breath, nausea and vomiting, plus indigestion, dizziness, unusual fatigue, sweating and shoulder pain. She ignored the symptoms for days, thinking she had a stomach bug, until an odd warmth in her chest prompted her to call 911.

Chapman, a phlebotomist, says her four months in a cardiac rehab program gave her a new outlook on life. "After my heart attack, I was lost," she says. "I realized I was blessed. But I didn't know where to start or what to do." Already a nonsmoker, Chapman changed her diet dramatically, cutting out nearly all sugar and salt, saturated fat and red meat. Her doctors convinced her to quit that second job and focus on reducing her stress. "They set me on the right track," she says. "I sleep better now, and I feel younger."

Today, she speaks out as an ambassador for the Heart Truth, educating women about heart risks. So she knew exactly what to say when her older sister called, describing symptoms that turned out to be a blood clot. "I told her to do me a favor and get tested," she says. "I warn everybody: You have to speak up to be heard."