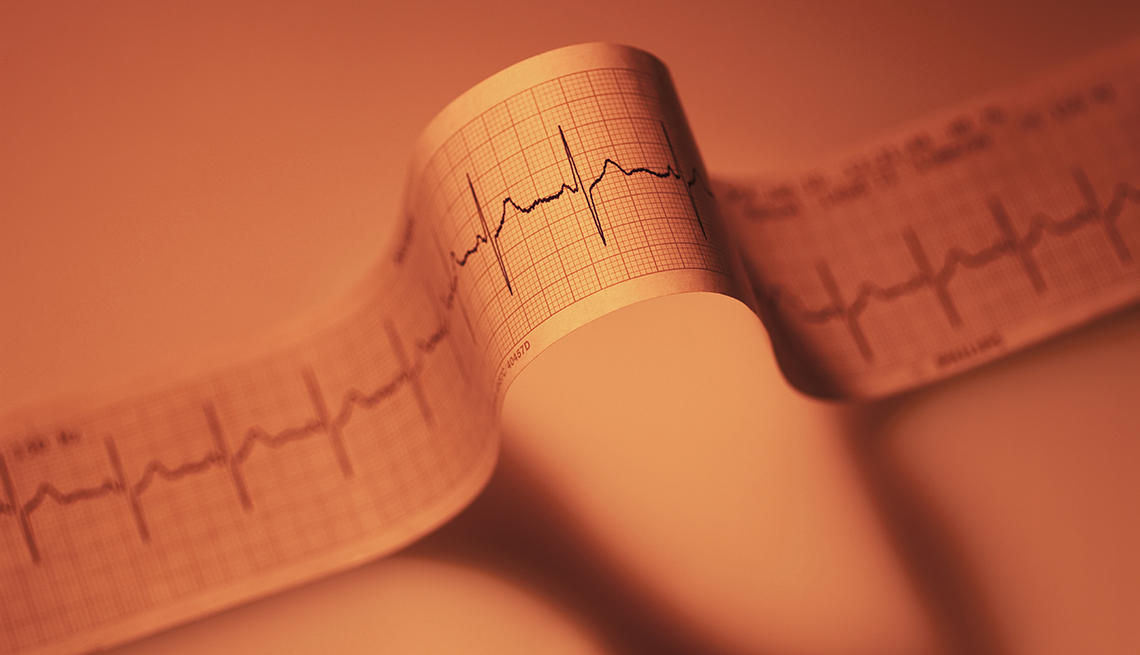 Know heart disease symptoms that should send you to a doctor. In most cases, a standard electrocardiogram can detect atrial fibrillation

En español l It started with a loud hum in his right ear. Then dizziness, like a sickening wave wanting to roll him to one side of the room. David Redford had crouched to move some of his kids' shoes, but within seconds, all he could think was "Head for the couch."

It was a lot farther away than he needed it to be, so he started to crawl, and things only got worse. "I reached out with my left arm," he says, "and it wouldn't go there. Just … nothing."

So he crawled right-handed, banging into the wall even as he tried to use it for support. He had just made it to the couch when the nausea kicked in. "My wife came home right as my daughter was handing me a bucket," he says.

After a 911 call, an ambulance ride and a flurry of ER tests, Redford got the news. "They found a spot in the rear of my brain," he says. "I'd had a stroke."

It had been a mild one, thankfully, and he never lost any facial or speech function — "just my left arm temporarily" — but this stroke seemed, well, a bit out of place. Anyone can have strokes or heart attacks at any time, of course. But at 59, Redford wasn't a prime candidate. A marine biologist by profession, he's lean, healthy and active. And his cholesterol and blood pressure numbers had always been stellar.

His physicians suspected another cause and implanted a small heart monitor in his chest to get some hard data. It didn't take long to confirm what the doctors suspected.

Atrial fibrillation — "A-fib" for short — is an electrical disruption in the pumping rhythm of the heart's upper chambers, the atria. Instead of pumping firmly and rhythmically in tune with the (lower) ventricles, the atria flutter randomly at a high rate and blood flow weakens.

A-fib is not well understood, even by scientists. No one knows what causes it. It's virtually impossible to predict who will get it. Good habits may not prevent it. Exercise, so important to a smart lifestyle, can trigger it or, in some cases, make it worse. And everybody is a potential target: Some 2.7 million Americans have it, the vast majority older than 50. Significantly, men get it at a much younger age than women do.

For all the mystery surrounding A-fib, that last statistic has doctors especially stumped. According to the Centers for Disease Control and Prevention, the median age for men with A-fib is 66.8; for women, it's 74.6. (Interestingly, African Americans are about 50 percent less likely to get it than people of other races are.)

While experts suspect everything from the size and strength of the atria to fibrosis (toughening or scarring with age) in the cardiac tissue as potential causes of A-fib, that doesn't explain the age difference between the genders.

Here's what the doctors do know. There are two types of A-fib: paroxysmal, which is an arrhythmia that comes and goes; and chronic, which is an arrhythmia that won't go away. And then there's lone A-fib, which tends to strike younger patients out of the blue for no apparent reason. "That's the scariest kind," says Michael Argenziano, M.D., chief of adult cardiac surgery and director of the surgical arrhythmia program at New York–Presbyterian Hospital/Columbia University Medical Center.

Whatever the type, there's reason for concern: Being in A-fib raises your stroke risk fivefold.

Why? As David Redford knows all too well, blood that would normally be pumped out of your atria can pool there and form clots that may travel to the brain. "About 15 percent of all strokes are caused by A-fib," says Marc Gillinov, M.D., surgical director of the Center for Atrial Fibrillation at the Cleveland Clinic. "And often the strokes caused by A-fib are bigger and more devastating than strokes caused by other problems." Chronic A-fib, even if you never have that stroke, can also weaken your heart muscle and make you a candidate for heart failure.

So how do you know if you're at risk? Symptoms include a fluttering in the chest or heart palpitations, shortness of breath, fatigue or weakness, chest pains or confusion. Any of those symptoms should send you to a doctor, who can usually diagnose A-fib with a standard electrocardiogram (EKG) or by having you wear a portable heart monitor if the EKG is inconclusive.

You can save on vision care, prescription drugs, hearing aids and more

If you do have A-fib, you'll need to watch for triggers, such as excessive caffeine, alcohol and stress, which can set off an arrhythmia. "An active, frenetic life makes you secrete stress hormones," says Argenziano. "They can stimulate the heart and work on the electrical signals that trigger A-fib." Other things that can stress or stimulate the heart: cold weather, eating a big meal (which raises insulin levels, blood pressure and heart rate), and intensive exercise or exertion.

Scott Mangum knows all about the latter. He pedals hard — that's what bike racers do — and that day eight years ago was no different. "I was pushing it up a hill," he says. "And then … something was funny. My pulse was unusual. Sort of rapid and irregular."

He didn't think much of it at the time because as soon as he topped the hill and his heart rate dropped, the feeling disappeared. But from then on, whenever he would sprint, he'd feel it again: "After a while, though, my pulse wouldn't go back to normal. That's when I got it checked."

What Mangum, now 56, didn't know at the time, but would learn, is that he may have been setting himself up for A-fib for years. There may be a link — the research is plentiful, but conflicting — between extended, intense exercise and A-fib. "The science shows that middle-aged guys are more susceptible," says Jordan D. Metzl, M.D., author of The Exercise Cure and a sports medicine physician at New York's Hospital for Special Surgery. A 2013 study in the European Journal of Preventive Cardiology showed a fivefold increase in A-fib risk in middle-aged endurance athletes, especially men. Meanwhile, a 2013 study in the journal Circulation: Arrhythmia and Electrophysiology found no "statistically significant association" between normal exercise and A-fib.

The bottom line? If you experience symptoms during exercise, get checked out. But should you stop exercising hard if you're a middle-aged man?

Metzl — age 47 and a veteran of 30 marathons and 11 Ironman triathlons — is frank: "Maybe I'm a candidate for A-fib. I train hard and for many hours. But there's no way for anyone to predict A-fib. Should I curtail my training because of a potential threat? I don't think so. Exercise strengthens your heart. What I know as a doctor is that a stronger heart generally means better outcomes if something bad does happen."

If you are diagnosed with A-fib, don't panic; There are several effective treatment options.

The upshot? If you feel an unusual flutter in your chest, get it checked out. Treatments are effective, but only if you're using them.